Joint worship during the 2018 Synod of the CRCNA and general synod of the RCA
Photo by Karen Huttenga
January 2, 2019

In 2018, CRC News covered a variety of stories, from things taking place in pews across North America, to lives being changed through ministry around the world.

Website analytics have identified the 100 most-read stories of the past 12 months. According to this data, some of the stories that most touched and inspired you included the joint synod at which delegates for the Christian Reformed Church in North America and the Reformed Church in America gathered to celebrate their common heritage and to conduct business in June.

Readers were also affected by some sobering deaths, statements on important issues, and stories that demonstrated God at work in many ways in churches and in the lives of people.

Here is a breakdown of some of the year’s top stories.

Many of this year’s top stories came in June during the annual decision-making meeting of the denomination.

Mixing participants from both denominations, the service was exuberant, prayerful, and driven by a conviction that the two denominations share a common heritage and mission.

On another date that week, Steven Timmermans, executive director of the CRCNA, spoke to delegates at Synod 2018 about the state of the church. During his presentation, he specifically emphasized numbers that are being tracked and what this data can tell us about the denomination and our future.

“Numbers themselves are not the goal, but they can help us understand ourselves better and can serve to remind us of what God calls us to do,” he said.

An impromptu lunch during Synod helped open doors to communication about a potentially contentious issue facing this year’s synod. Delegates from Classis Minnkota and Classis Columbia sat down for lunch with employees of the Christian Reformed Church’s social justice agencies on Tuesday, June 12 to talk about their work. Minnkota and Columbia made overtures (requests) to Synods 2017 and 2018, objecting to various aspects of the agencies’ justice work.

As the CRCNA works on its next ministry plan, a key area of focus will be on reconciliation thanks to a decision made by Synod 2018. Detailing a 25-year decline in the denomination’s membership, Classis Pacific Northwest sent an overture to synod suggesting that “a contributing cause of that change is the emotional and spiritual hurt and grief caused by the bitter conflict that remains unresolved. …”

In response to this request, Synod 2018 agreed to urge the executive director to issue a purposeful and consistent call to the entire denomination to be intentional in prayer for reconciled relationships, with special focus toward brothers and sisters who have left the CRCNA for various reasons.

Some of this year’s most-read stories were also about innovative ministry and inspiring leaders in local congregations across North America.

Rod Hugen and Eric Cepin, for example, used the blockbuster 1999 movie The Matrix as part of their template for the Village Church, when they founded it more than 15 years ago in Tucson, Ariz. With its cutting-edge special effects and science-fiction action, the movie struck a chord with millions of viewers around the world. But for Hugen and Cepin it was the core message, in an era of falling church attendance and brash skepticism, that hit home.

In Harlem, New York, James Allen has been crusading on behalf of alcoholics and drug addicts for nearly 60 years. He has fought on their behalf and helped them get sober so they could start to build better lives. But during that time he was he was never ordained to the ministry. That changed in February 2018.

And in Grand Rapids, Mich., two copastors, one from Northern Ireland and the other a former missionary in Ethiopia, were installed Sunday, Sept. 9, to lead Church of the Servant CRC. They replaced Rev. Jack Roeda, who retired in 2016 after 33 years as the congregation’s pastor. The sanctuary, which features a translucent skylight dome supported by the slender branches of a structural steel “tree,” was packed for the service.

Similarly, Rev. John Algera retired after 40 years as pastor at Madison Avenue CRC in Paterson, N.J. He said his ministry has been sustained by the Holy Spirit, enriched by time spent at monasteries, and enhanced by prayer walks he has taken with church members while praying for an end to violence and poverty affecting their Paterson, N.J., neighborhood.

Another top story was about Thomas J. Walcott, a Christian Reformed Church chaplain who assumed duties as the 11th Chaplain of the Coast Guard. In this role, Walcott advises Coast Guard leaders on matters of religious support and plays a key role in ensuring that pastoral care is available for Coast Guard personnel and their families through the more than 40 chaplains serving in duty stations along U.S. coastal waters.

2018 also saw some big changes to buildings and infrastructure in the denomination. 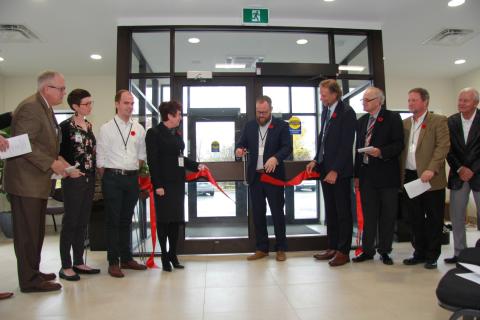 In November, for example, a crowd of guests and staff gathered in the new lobby of the Christian Reformed Church in North America’s Canadian office in Burlington, Ont., to celebrate the reopening of the newly renovated facility. Among those present for a ceremonial ribbon cutting were representatives of municipal, provincial, and federal levels of government; past and present denominational leaders; artists whose work adorns the renovated space; ecumenical partners; and staff.

In addition, after 43 years, the property of  Back to God Ministries International located in Palos Heights, Ill., received  new owners: Trinity Christian College. At its February 2017 meeting, the former board of Back to God Ministries International approved the motion to sell its facilities in Palos Heights, Ill., and move the ministry’s headquarters to the offices of the CRCNA in Grand Rapids, Mich.

A nother popular story in 2018 had to do with the CRCNA logo. While cleaning out old files on her computer system earlier this year, an employee at the Christian Reformed Church in North America offices in Grand Rapids, Mich., came across an interesting 2014 email. The email had been sent by a relative of the now-deceased designer of the CRC logo. While the original email had been responded to back in 2014, it had been tucked away in an email file folder. Finding it again helped to solve the mystery of who designed this recognizable symbol.

This year, some of the top CRC News stories had to do with the sobering news of several deaths. 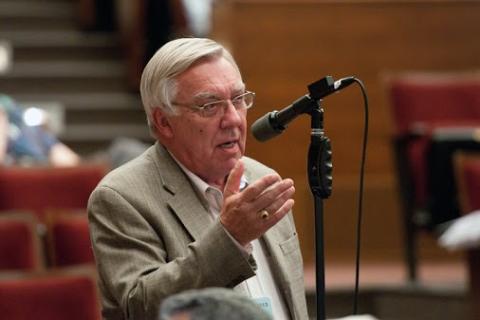 Rev. Peter Borgdorff, former executive director of the Christian Reformed Church in North America, died on Monday, May 21 in Grand Rapids, Mich. Serving in many capacities in the CRCNA, from being the pastor of a church in Salt Lake City, Utah, to becoming the denomination’s first executive director, Borgdorff devoted much of his ministry to trying to break down barriers that separate God’s people from one another.

While Rev. Borgdorff and Mr. DeVos were recognizable names, the Christian Reformed Church in North America is made up of about 228,000 lesser known people who each contribute to God’s kingdom in a variety of ways. One such kingdom worker was Thea DeGroot of Sarnia, Ont., who passed away in May 2018.  Her commitment to justice will have a lasting impact in her community and on the denomination.

Another kingdom worker who died in 2018 was Tom Polet, one of the last surviving "fieldmen" of the Christian Reformed Church. As a fieldman, Polet was tasked with helping new immigrants settle in Canada. One day in autumn 1954, Tom Polet, received a phone call from a farmer in Manitoba. The farmer had a complaint about a young immigrant couple from the Netherlands that Polet had connected him with a few months earlier.

CRC News readers were also touched by the death of Billy Graham, a pastor to U.S. presidents and a preacher who influenced ministers and parishioners of many denominations. He passed away in February at his North Carolina home at the age of 99.

CRC News readers were interested in several conferences and events that took place during the past year.

For example, black clergy and ministry leaders from the Christian Reformed Church in North America gathered in October for prayer and praise, and to support and encourage each other with new leadership direction as they face obstacles and challenges that can get in the way of doing the work God has called them to do.

At another conference, one woman choked up as she spoke of a male pastor she has known for many years who is shunning her now that she has answered a call from God to attend Calvin Theological Seminary. She was one of several women who shared personal stories during a table discussion time at the SheLeads Church Together Summit 2018 Friday, Nov. 30, at Calvin Theological Seminary in Grand Rapids, Mich.

Many musicians go on tour, playing concerts in towns and cities across the country, but few have a road crew that consists of their spouse, their nine-year-old son, and their five-year-old daughter. Jeremy (Benjamin) Zeyl  crossed Canada with his family, raising money for World Renew, local ministries chosen by the churches at each stop, and his I Am Not my Own Worship Ministries. He has played concerts in cities and towns from Charlottetown, P.E.I., to Smithers, B.C., and from Emo, Ont., to Edmonton, Alta., helping to raise more than $100,000 for ministry, a good start on the way toward a goal of $500,000.

Some of the most read and shared stories from CRC News in 2018 had to do with official statements made by the denomination related to current events.

In the wake of the tragic and horrific mass shooting at Tree of Life Synagogue in Pittsburgh, Pennsylvania, on October 27, 2018, and in the shadow of what might have been a mass shooting at First Baptist Church in Jeffersontown, Kentucky, denominational leaders issued a statement of grief, lament, and a call to greater reconciliation with those who are different than ourselves.

Leaders of denominational ministries and institutions of the Christian Reformed Church in North America, also identified the proposed drastic cuts to the refugee resettlement program in the U.S. as a critical moment for the voice of the church. They issued a statement asking the Trump Administration to stop cuts to the Refugee Resettlement Program, and instead increase the number of refugees the U.S. will resettle in the upcoming year.

CRC News will continue to cover key events happening in our denomination in 2019. To receive a weekly digest of stories every Wednesday, click here.