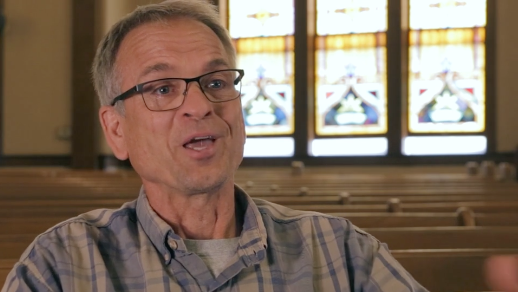 Not long after getting out of prison, Kurt Flier decided to attend the Sunday service at the church across the street from the halfway house where he was living.

Flier had heard that the congregation at First Christian Reformed Church in Grand Rapids, Mich., welcomed men such as himself who were convicted of Criminal Sexual Conduct (CSC) violations and were living in the house run by Living Water Ministry Network.

What he didn’t know was that the pastor, Rev. Randy Buursma, was the same man who had visited him and other inmates a few times when he was behind bars in Muskegon.

“I was brand new, and my spirit started jumping when I saw Pastor Randy,” said Flier, taking a break from eating pancakes and eggs during a recent Men’s Breakfast at the church.

“I thought it was a divine intervention for God to put me there,” said Flier. “When the service was over, I came up to him, and Pastor Randy gave me a big hug.”

Scattered around the fellowship hall on this recent morning were a handful of men such as Flier who had been in prison for CSC convictions. They either were living in or had lived in the halfway house across the street, or they were currently living in other Living Water homes.

Considering the type of crimes for which they were convicted, this was a place in which they felt welcome, said Flier. “A lot us come to this church because this is where returning citizens feel accepted,” he said.

“I grew up in the CRC,” Flier added. “But the church where I grew up was so different. This church is so laid back and friendly. I feel so at home here, with the teachings and so on. It seems to me the CRC has changed for the good.”

In fact, the relationship that First CRC has developed with men such as Flier is featured on one of the videos that are part of the denomination’s new ministry plan, a blueprint for ministry called Our Journey 2020.

Listed under the category of Church and Community, the video showcases the part of the ministry plan that calls congregations “to meet our neighbors at community events and gathering places, listening to each other, learning from each other, and serving each other. By our presence we will become channels for the love of Christ and the Holy Spirit’s life-giving transformation.”

In the video, Michael Cooper talks about how First CRC became a channel for the love of God in his life. He said he applied to stay in the Living Water home near the church not long before his more than 20-year-sentence was up.

After his release in 2009, he was among the first men to start coming to First CRC and recalls it as an “awe-inspiring” experience “to see a body of believers, worshiping together, singing together, praying together.”

At the same time, he said, “they asked me my name. They became personal. They reached out. They gave me a sense of belonging, like I have a family.”

Buursma, the pastor, recalls when Cooper called and asked to attend services, as well as when other men such as Flier started showing up on Sundays. At first, it was a challenge and bred uncertainty.

“This wasn’t a ministry anyone was looking for. We weren’t prepared for this. It created some tension” as people asked how this would work, he said.

But that was resolved, said Buursma, “when we developed a covenant between the guys and the church.”

First CRC, for example, limited the areas in which the men could go and the people with whom they could have contact. Tensions also eased a bit when a few of the men shared their stories with church members, talking about experiences that shaped them.

“We heard so many horrific, unbelievable stories of what they’ve been through and the abuse they suffered when they were younger. That helped to make it a much more human endeavor,” said Buursma.

“It is challenging to do this type of ministry,” the pastor went on. “But the church didn’t throw up huge red flags to prevent us from doing this. We moved ahead.”

Currently, First CRC works with other organizations such as Living Water and the local Criminal Justice Chaplaincy to help the men.

Meanwhile, First CRC has included the men in its program of household groups in which church members meet regularly to share their lives. The men make up a separate household that meets in the fellowship hall.

In addition, several men from First CRC have volunteered to serve as mentors for the men from Living Water, helping them deal with the process of reentering society, of finding and keeping work, and of coping with different issues in their lives.

“It was amazing how quick people were to help in any way possible,” said Buursma. “When your church operates out of a deep sense of grace, you begin to operate differently.”

At First CRC, this means being willing to address the needs of the community in which it finds itself.

“I believe the church is challenged to be involved in God’s activity that is happening around them,” said Buursma. “We are doing a ministry that isn’t our ministry. It is God’s stuff.”

At the recent men’s breakfast, Pastor Jim Bright, executive director of Living Water, sat with some of the men being helped by the organization. He spoke to one softly, offering advice on a tough issue.

Later, Bright said he deeply appreciates the help First CRC and its pastor have offered by holding the breakfasts, by providing space for the men to congregate for meetings, for enfolding them into its services, and by connecting them with mentors.

“This church has played an important role in helping to change the men’s hearts,” said Bright, whose wife, Linda, helps with operating the ministry.

Among other things, Living Water takes the men to visit their parole officers and helps them obtain driver’s licenses and other documents and resources.

“Pastor Randy and First CRC have welcomed the men with open arms,” said Bright. “We appeared in the neighborhood, and they responded to us.”

To learn more about Living Water Ministry Network, which will hold its annual fundraising dinner on March 28, click here.