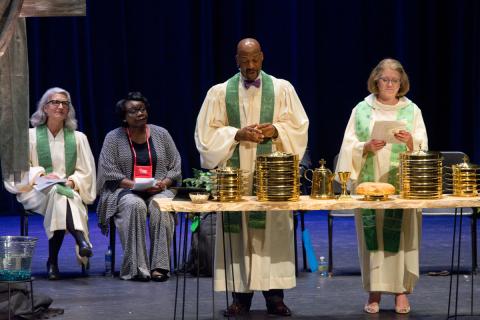 Axes that were used to threaten others from entering a church, along with chains used to bar the doors, were recrafted by Pillar Church of Holland, Mich., into a baptismal font that was placed center stage on Thursday evening, June 7, in the Calvin College chapel.

Meeting in joint sessions and separately over the next several days on the campus of Calvin College in Grand Rapids, Mich., the two denominations gave evidence of the evolving connection between the CRCNA and the RCA. After more than two years in planning by representatives from each denomination, the worship services, events, and other meetings reflected a rich heritage and a sense of harmony that have been growing between the two churches since the early 2000s and especially since they met concurrently in Pella, Iowa, in 2014 and signed a joint resolution.

Another joint session took place on Friday night, a few hours after the CRC formally opened for business and elected its officers -- some of whom had experience in the roles before, and others of whom were new in helping to guide synod through its upcoming days.

During the Friday joint session, Rev. Denise Posie, the CRC’s director of leadership development for women and ethnic ministry, led delegates through some of the history of this new era of cooperation, highlighting the “Pella Accord,” the joint resolution signed in 2014.

The resolution states, among other things, that “the principle that guides us, and the intention that motivates us, is to ‘act together in all matters except those in which deep differences of conviction compel [us] to act separately’” (Acts of Synod 2014, p. 504).

Saturday morning, delegates from both denominations also met for three hours in joint sessions, marking the first time that delegates from the RCA and CRCNA were asked to be in advisory committees together. Their conversations were recorded and reported, not for action by either synod, but to give direction for the future.

Delegates divided into groups of members from each denomination to discuss proposed approaches on how the churches might move forward together in ministry in years to come.

They looked at four topics: interfaith engagement, congregational renewal, collaboration between the RCA and CRCNA, and the brainstorming of a “new creation” for the future of the two denominations.

In the afternoon on Saturday, the RCA General Synod approved Eddy Alemán by voice vote as the new general secretary of the RCA. The vote followed a presentation by Alemán and a time of questions from the floor.

“I am thrilled by this decision,” said Dr. Steven Timmermans, the CRC’s executive director. “Eddy is an excellent example of servant leadership who has a real heart for the church. I look forward to working alongside him in this new role.”

On Sunday, day four of the synods, delegates had the chance to worship at local churches and to spend some time in joint advisory discussions and relaxing.

Then on Sunday evening, delegates united for worship in the DeVos Center for Arts and Worship at the nearby Grand Rapids Christian High School. Participants from the RCA and the CRC helped to prepare and participate in the service that was at times exuberant, at times prayerful, and at all times driven by the conviction that the two denominations share a common mission.

On Monday morning, during their last time of joint worship, delegates from the RCA general synod and the CRCNA synod gave verbal and written reports about their joint advisory committee discussions that took place earlier.

The proposals discussed by the groups presented new ways for the two denominations to cooperate. They varied from probable, already-in-the-works ideas, to a less likely, what-if, idea for the future.

Proposals already being worked on or likely to be worked on soon are ways of further consolidating denominational services, especially in the area of congregational renewal, and a joint effort to promote and shape interfaith engagement.

Less likely at present is a proposal to join and radically reconfigure the denominations.

On Wednesday, the CRC synod agreed to form a joint committee with the RCA to help both denominations reach out to other religions.

The decision came out of recommendations from the CRC’s Ecumenical and Interfaith Relations Committee (EIRC). In the published agenda for synod, the EIRC had signaled that they were working out an arrangement with the RCA to cooperate in interreligious matters -- relationships with non-Christian faiths. By the time synod met, the EIRC had received a request from the RCA to merge the efforts of their two committees for this work.

Another important move that highlights the CRC’s desire to build bridges, not only with the RCA but with other churches, took place early in the week when CRC delegates decided to make reconciliation a key area of focus as the denomination crafts its upcoming ministry plan.

Lori Fieber of Classis B.C. North-West, said, “I’m excited about all this language towards reconciliation.” She talked about her home church striving to become a gospel-centered community that incorporates restorative practice and noted that an environment that is conducive to restoration must include willingness.

“Let’s continue to make overtures and offers of reconciliation towards those we are in conflict with, but be patient,” she said.

These events were by all means historic in the lives of two churches united in Reformed faith yet driven apart by issues and personalities that are in the past. Praying and singing and talking together were highlights of the joint gatherings. Over a few days in early June, the churches took a few more steps together toward the future.