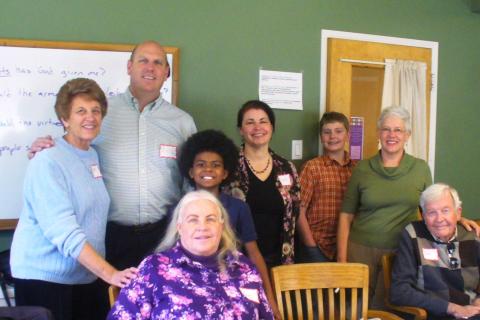 First CRC in Denver, which is more than 100 years old with members spanning almost as many years, wanted to design a program that reached across the generations.

Nancy Waanders, worship coordinator, and Shirley Van Heukelem, ministries coordinator, were able to do this by creating an intergenerational small group environment that included children in the first grade through people in their 80's.

Calling it Story Groups, they centered the initial program on the congregation's education year exploring themes from the Old Testament, said Waanders.

Since the first Story Groups was well received, they recently did a three-week version of it during Advent and another during Len, said Waanders.

The initial program was held during the 2011-2012 education year and began with Pastor Joel Schreurs' plan to lead the Colorado congregation through the Old Testament by focusing on one full book of scripture per week, using the structure laid out in How to Read the Bible through the Jesus Lens by Calvin Theological Seminary professor Michael Williams.

The team that organized the program hoped church family members could use this as a chance to dive more deeply into the Old Testament and follow along with the weekly Bible readings.

At the same time, they understood that it probably wasn't practical to expect most people to read through so much scripture each week.

So, the team decided to replace the regular, after-church education hour with an hour in which people of all ages could gather in small groups and spend time in that part of God’s story together.

And, since each person in the congregation was already grouped into "household" they decided to use those groupings for Story Groups, the name they gave to the after-church gatherings.

A Hospitality Team was created to provide snacks and to ensure that each Story Group had one greeter who would make sure that each person including visitors felt welcomed and included into a group.

A Logistics Team was formed to situate each group somewhere in the building and to gather the supplies needed each week. And a Curriculum Team gathered weekly to plan learning sessions which connected to the worship service and were accessible for all ages, and included a take-home devotional piece.

The sessions included activities such as rebuilding the walls of Jerusalem with Legos, re-enacting the Israelites journey through the Red Sea, doing an "imagine you were there" reading of the Israelites crossing the Jordan River, and more.

Occasionally, all of the groups were combined for hands-on learning and during those sessions they played "guess-that-tune" from songs played on the piano that were based on passages in the book of Isaiah. They also had a chance to reflect on God’s actions in their lives at a variety of activity stations.

Each week participants went home with a reading guide that invited them read ahead at the level that suited them best: Light (key scripture passages in each book), Medium (Light plus), Full (the entire book).

During the worship service on the final Sunday, each Story Group chose a method (drama, art work, a power point presentation, etc.) through which to share with the entire congregation what they had learned from a particular book of scripture.

Perhaps the best summary of the experience comes from a child who was was asked, "What are these 'Story Groups' that you keep talking about?'"

Are you interested in exploring ways your church can invigorate its intergenerational faith formation efforts? Faith Formation Ministries can help. Contact us at faithformation@crcna.org.