Worship in an Old Paint Factory 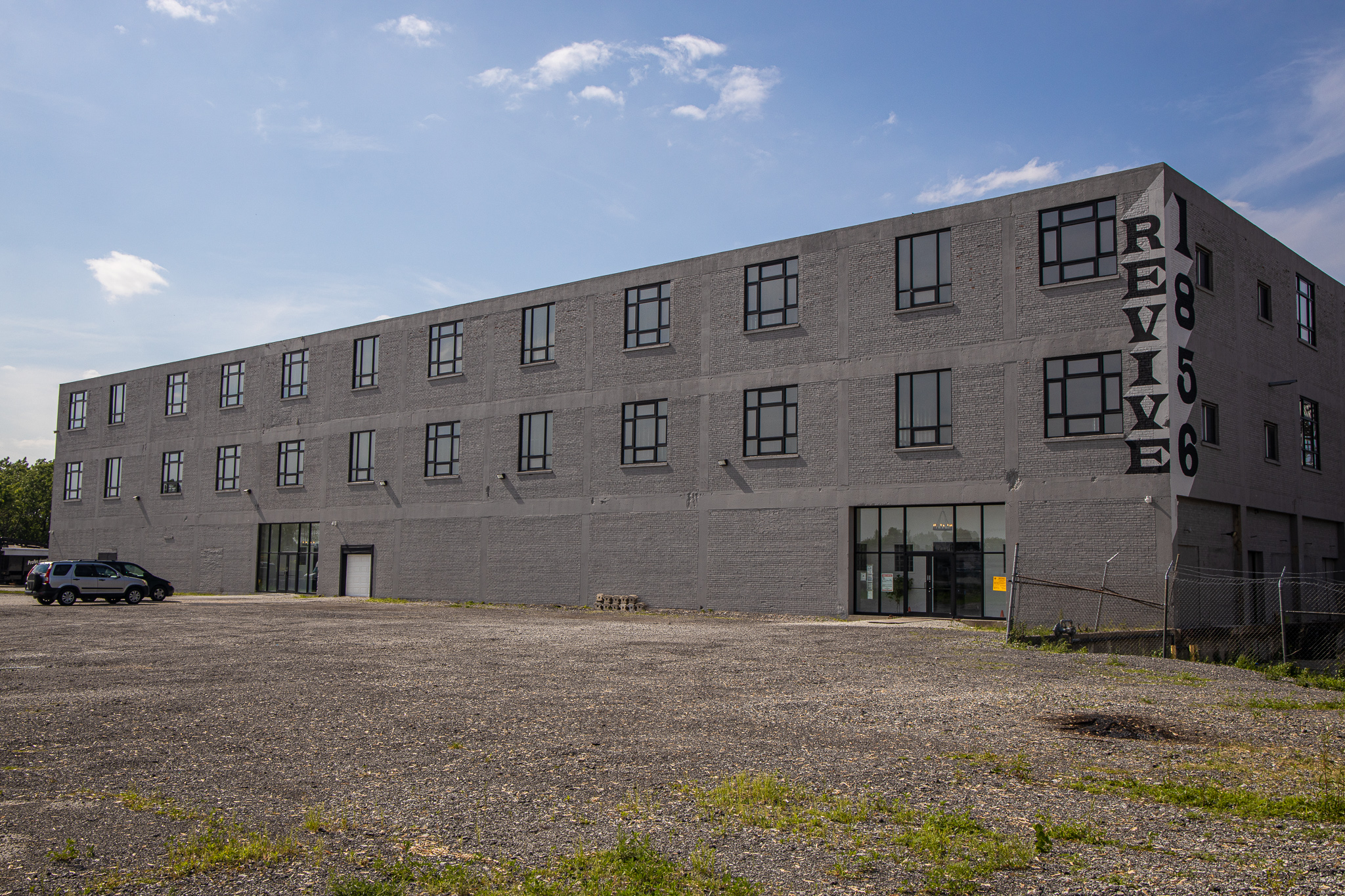 Carmen Rodriguez recalls when the call went out, asking members of Grace and Peace Community Church to donate a few dollars and pray for additional seating to accommodate people who would be gathering in a large tent in Oct. 2016 for 21 days of special prayer and revival.

The circus-style tent was put up across the street from an old, three-story, 80,000-square-foot paint factory that the church in Chicago, Ill., had obtained in 2008 and was in the final stages of turning into its worship center.

Within days of the prayer request for seating, finding the money wasn’t really necessary. As has so often happened for this nearly 40-year-old congregation, people’s prayers were soon answered — this time, in the form of donated pews.

“When we have thought something was not possible, we prayed and then God answered,” said Rodriguez, who joined the church more than 20 years ago.

They met in the tent for the revival in October 2016 to pray for the neighborhood and to shift momentum from the church’s site in Humboldt Park (on the west side of Chicago) to the community around the former factory in North Austin (the next neighborhood west). In the Easter season of 2018, Grace and Peace moved into their new space.

“Through the years, we have been a praying church and have seen God’s blessings — and although these may not always come when we want, we know it is important to wait for the Spirit,” said Rodriguez.

As the coordinator of a weekly women’s group, Rodriguez was among several church members who underwent a process of leadership and self-awareness training, funded through a CRC Sustaining Congregational Excellence grant to prepare them for the move into their new building. (The Sustaining Congregational Excellence program wrapped up in June 2018, and future requests for ministry innovation grants are now handled by Ignite.)

Included in the training were a series of retreats and Wednesday-night Bible studies in which the participants got to know Scripture more deeply and shared a meal. They were also led through a specialized training to sort out their personal strengths and weaknesses.

“The training helped me to more clearly see my place in the church as a leader,” said Rodriguez. “I realized I have what it takes. Once you know that, you take the ball and run.”

When you visit Grace and Peace Community on Sunday mornings these days, you enter a spacious, warehouse area with high ceilings and pillars and a cement floor that still bear splatters and splashes from the old factory’s paint-making days.

The service begins at 9:30 a.m. with prayer, and the format is flexible so that people can stand and move and speak as they feel led by God. This is a key factor at Grace and Peace — allowing the Spirit to take hold and to use personal expression. Following prayer is a high-energy time of music, more prayer, and then a sermon, usually from Pastor John Zayas.

A Season of Preparation

In a recent interview outside of a Chicago hospital being demolished, Zayas said the SCE grant played an important role in helping the church and its members prepare to move into the former factory.

Being able to buy the building and make the move from one Chicago neighborhood to another was fraught with countless challenges. But most crucial was making sure that the people themselves were ready for this new period in the church’s life.

“The whole process of leadership training prepared us for the baptisms and the new growth we are seeing,” said Zayas. “We took time for a season of lament, seeking God’s face, and being very still to examine ourselves and discern our gifts as leaders.”

Zayas was outside the hospital to buy scrap windows to install in the upper floors of the paint factory. From recycling companies, Grace and Peace also purchased fire-rated doors, various fixtures, and other items for their worship space.

Plans include opening space on the upstairs floors of the building for additional community outreach and ministry. Right now, the greatest need is for an elevator and sprinkler system — both of which, Zayas is convinced, will arrive — as did those pews for the tent — through prayer when the time is right.

Leaving paint splashes on the floors and walls of the sanctuary, said Zayas, is a reminder to people when they come in that they are also spotted and stained. “We want people to realize that although they are contaminated by the world, God can use them,” said Zayas.

One of the church’s prayer leaders is a man who spent 25 years in prison, where time behind bars gave him a chance to learn to pray deeply and with a confidence he now shares. Others come from gangs; some worked as drug dealers; others are long-time residents of this part of Chicago. All find refuge and a chance for praise and spiritual growth in the church, said the pastor.

“Even though you have marks and scars on you, you are welcome here. That is one of our taglines,” said Zayas.

A History of Hope

Grace and Peace traces its history back to the summer of 1977, when more than 30 people from the Humboldt Park and Logan Square neighborhoods of Chicago founded a new community church called Spirit and Truth Fellowship, said Preston Hogue, a Grace and Peace pastor.

Even from the start, Sunday worship was only a part of the ministry effort.

Within five years, he said, Spirit and Truth members established an elementary school, a leadership development school, a thrift shop, a counseling agency, a college-prep program, and various home cell groups throughout the city. Meanwhile, they joined the Christian Reformed Church in North America and became one of the denomination’s first primarily Latino church plants.

In November 1983, Spirit and Truth Fellowship launched three small groups to start three new churches. Pastor Pedro Aviles and about 25 others were commissioned to start a church in the northwest side of Chicago called Grace and Peace Fellowship.

The early years were a struggle, said Aviles, now pastor of Ebenezer CRC in the Chicago area. “We as leaders were not very well equipped to plant a church,” he said. “We were launched as a premature baby and didn’t think we had what it took to survive.”

But they kept at it, devoting themselves to prayer and constantly sharpening the vision for who they were and what they could do. In the meantime, said Aviles, “new leaders joined the church, bringing important skills with them — and we began to see God acting in our life.”

By 1999, the church purchased a former Muslim community center and used that for many years as their ministry center — until moving into the paint factory.

In early 2002, Zayas and his wife, Angelina (Iliana), both from Grace and Peace Fellowship, began a home Bible study. The hope was to attract nonbelievers from the nearby Hermosa neighborhood to the Christian faith, said Hogue. It began with six people, and by May of that year 70 people were attending.

“This unexpected growth came about through word-of-mouth by nonbelievers who experienced Christ and told those around them how and where this conversion happened,” said Hogue.

Zayas launched a new worshiping community called GAP Community Church that began to flourish, and in the summer of 2005 leaders from both Grace and Peace Fellowship and GAP merged into Grace and Peace Community.

“Our church has been and remains very much about our neighborhood,” said Hogue. “Moving into the new space, and being able to better prepare for that as leaders, has made us much more aware of who we are and how we can serve others.”

Making a Church for All Nations

The church has held food giveaways, and members often walk the streets and pray with people. They offer shelter to women in need, provide classes on coping with mental illness, and hold a summer camp in the church for young people (an especially popular outreach).

As part of this year’s summer-long youth camp, leaders are preparing the young people to paint a large mural — if they receive city approval — on a freeway viaduct near the church. If the city turns them down, they will paint the mural on one of the brick walls of the church.

The young people are now busy coming up with ideas for the mural, which will welcome visitors to their community, North Austin, a mix of aging buildings, single-family homes, small businesses, abandoned manufacturing plants, and scattered blight.

Besides planning the mural, camp participants are putting on plays, making films, studying the Bible, and learning different types of dance. They will also go on field trips.

All of this activity, energy, and creativity is what drew Lussandra Lott to Grace and Peace not too long ago. This summer, she is helping out in the youth camp, sharing the joy and the insights she has received from the people who mentored her. Besidesoffering support as she steps into adulthood, these mentors have helped her sense a calling to get involved in some kind of ministry. As a result, she is working on a degree in pastoral ministry at a nearby university.

“This church doesn’t exclude young people,” said Lott, who started attending the Grace and Peace youth group while she was still at nearby Amundsen High School. “I knew five people, from my dance coach, to a counselor, to others who were coming here, and so I came.”

Right off, she was attracted by and felt comfortable with the informal “come as you are” atmosphere. “What really pulled me in is that I trusted the leaders. We came together and learned the Word. We were raised up and could live out and share our trials together.”

Once she started going to worship on Sundays, things really took hold, she said. The high-octane prayer and music and the preaching of Pastor John solidified that this was the place for her.

In their old site in the Humboldt Park/Hermosa area, the people attending Grace and Peace were mainly Hispanic. Now, in North Austin, that is changing.

“On Sunday, I look around, and I see people from all nations in one church — Latinos, African Americans, people who are white, Asians, and more — and I know we are all here learning together about God as one church,” said Lott.