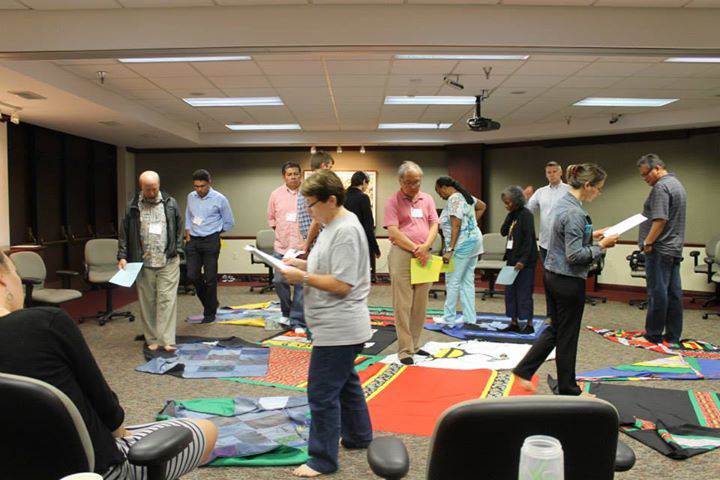 At first, all I knew about the Blanket Exercise was the name and that I was to learn some sort of Aboriginal history. I was extremely skeptical. I thought my task would be to make sure that what the organizers were trying to attempt was thorough, accurate and representative.

I went into the Blanket Exercise prepared to compare the facilitators’ information against my own personal and academic information. I did not have a very open heart.

I came to the Blanket Exercise, which Synod 2015 asked all classes and churches to take part in, having majored in Native Studies in the university. Also, I am an Aboriginal person who knows firsthand the effects of colonization.

In the Blanket Exercise, I joined others who walked around on blankets while a narrator described historical documents and events that have directly affected Aboriginal people.

The blankets represent the land of North America before contact between Indigenous People and European settlers. Some parts of the exercise were role-played and interactive.

As the narrator explained historical events of oppression and assimilation, we — representing Indigenous people — were moved around on the blankets, or off them, to illustrate history in a visual and physical way.

As I was literally walking through this other history, I was mentally checking off the dates and events in my mind. To my surprise, it was pretty accurate and very detailed.

There came a part when the narrator announced that at this point in history, the Canadian government relocated a whole community. To demonstrate this, one facilitator representing the government came to me and  moved me to another location on the blanket. I was relocated without consent or consultation.

This is significant because my mom was the first generation from her community to grow up in a community that had been relocated by the Canadian government with devastating results.

No one knew this information about me or my family beforehand. As I was sitting on a blanket alone, I had a glimpse of what it might have felt like for my mom and her family to be living in a foreign territory.

The way in which the Blanket Exercise was designed and how it presented information to the participants was powerful. Both Aboriginal people and non-Aboriginal people engaged with the learning — walking on the blankets and listening to the historical documents and events.

For me the Blanket Exercise caused me to feel a deep sense of loneliness as I reflected on the experience of my mom and my family.

I also realized that God can still teach me something and stir my heart even when I think I know and understand everything — as I had thought before going through the exercise.

My lesson was humbling, but I learned that God can work with any situation if we just take a step down the path. I learned also that my committee members were genuine in their learning and for them the experience was equally moving.

Blanket Exercise facilitators can only provide options to people who are ready and space to contemplate for people who are not ready and/or point them to more information if that’ll help.

While the experience can be intense, it is meant to be done in a positive, respectful and conciliatory manner for all the people involved.

The Blanket Exercise was developed by KAIROS following the landmark report of the Royal Commission on Aboriginal Peoples.

Here is a link to watch a short video about the Blanket Exercise. It is done in a Canadian context; however, Canada and the U.S. both have a history of colonization with the effects of it still impacting Aboriginal people and non Aboriginal people today.