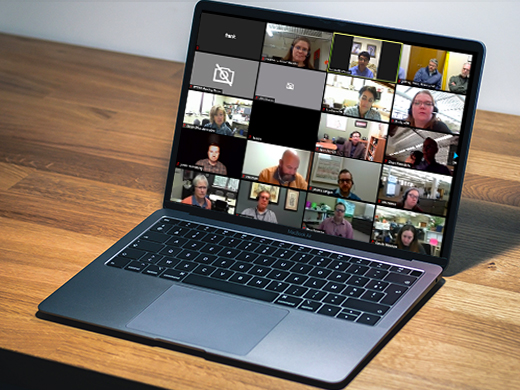 On Wednesday, Back to God Ministries International and its Chinese ministry team gave Christian Reformed Church personnel in the Grand Rapids, Mich., office, a chance to participate in a special chapel service with the theme of the coronavirus in mind.

Instead of holding the monthly chapel service in the usual way -- in one of the meeting rooms at the CRCNA office building -- BTGMI held the service via Zoom, a web-based service that allows people and groups to meet face to face via their office computers and other devices.

The idea was to stand in solidarity with the many dispersed believers in China and elsewhere who are being affected by coronavirus lockdowns. Using this online format, BTGMI also wanted to give participants a chance to worship as people in China have had to do for the past few months.

“The idea is to represent some of what we have been doing,” said Heather Haveman, communications specialist for BTGMI’s Chinese ministry. “There are many people who can’t worship and fellowship together and must meet in spaces like this.”

Across the CRC in North America and where it works in many places around the world, the coronavirus spread has become a major issue. Trips have been canceled; meetings and conferences such as Calvin University’s Festival of Faith & Writing have been rescheduled, and people are feeling anxious and wondering how they can best deal with this virus and its impacts.

The BTGMI Zoom chapel service aimed to provide one of the answers to people’s increasing anxiety -- by placing ourselves in the hands and care of Jesus, the Redeemer who rose from the dead and offers hope to all, especially in times such as we’re now experiencing.

Beginning with a reading of Psalm 46, the service focused on God “being our refuge and strength and an ever-present help in trouble.”

Musicians in the BTGMI studio in Grand Rapids then led online worshipers in singing “It Is Well with My Soul,” which begins, “When peace like a river attendeth my way, when sorrows like sea billows roll; whatever my lot, thou hast taught me to say, ‘It is well, it is well with my soul.’”

Giving the sermon was Pastor Luke, speaking live from a city in China. He had served as an intern at BTGMI when he attended Calvin Theological Seminary, and he is currently serving a congregation in China. He has seen the difficulties people there are confronting because of the virus that has sickened thousands and killed more than 3,500 people in that country.

“There has been a lot of panic over this, in China and worldwide,” said Pastor Luke. While it is hard to sort out all that is happening and containing our fear is hard, there is no reason to give up hope “because of the deep peace we receive in our souls from Christ.”

“We are all people of peace and can bring true peace to this unsettled world,” he said. “We offer the peace that has already been given to us by the resurrection of our Lord Jesus Christ.”

Luke told the story of Horatio Spafford, a Chicago lawyer who lost his children when a ship sank off the coast of Europe, sending him into deep grief. Spafford was inspired to write the hymn “It Is Well with My Soul” as he traveled back over the Atlantic near the spot where his children had drowned.

“Though he suffered immense sorrows, he still felt peace deep down in his heart, and that kept his soul from breaking down,” said Luke.

The praise band played “It Is Well with My Soul” again, and then Kurt Selles, director of BTGMI,  offered a closing prayer in Chinese, and Jerry An, director of the BTGMI’s Chinese ministry, offered the prayer in English:

"Dear Lord, thank you for the peace you achieved on the cross," said Pastor Luke as he closed his sermon. "Help us to keep it, and make it grow inside us and in the people around us.”