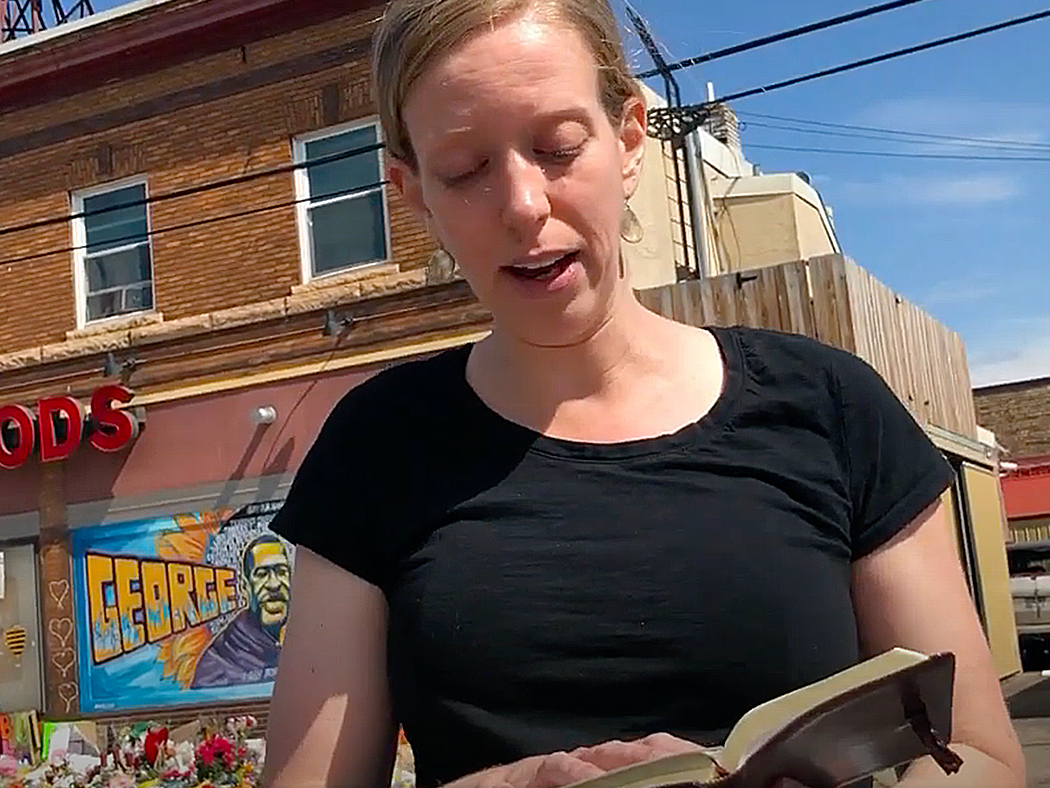 This photo comes from the Youtube video of the service of lament held by Calvary CRC in Edina, Minn. It was included in a Banner story earlier this year.

Ever since the death of George Floyd on May 25 in Minneapolis, Minn., the Christian Reformed Church in North America Office of Race Relations has been busy handling requests from churches across the denomination seeking resources and assistance in addressing racism.

Whether it be written materials, video recommendations, or requests for personal help, congregations have flooded the office asking for help to know how to respond.

The specific event that triggered this interest was a video that circulated the world showing a Minneapolis police officer kneeling on the neck of Floyd for nearly nine minutes and in the process, according to officials, killing the 46-year-old black man.

Police had been summoned on Floyd after a convenience store employee called 911 and said that Floyd had bought cigarettes with a counterfeit $20 bill. Floyd’s death brought to the surface many feelings about race, systemic racism, and what we all can do to stop it.

“Absolutely, requests for help have gone way up since that happened,” said Idella Winfield, administrative specialist for the Office of Race Relations (ORR). “Before, there were churches that hadn’t been particularly engaging the issue, but now many want to be part of this process.”

In the Minneapolis area itself, there are two strong examples of CRC congregations that have awakened more pointedly to the need to address racism in their midst.

One of them is Faith CRC in New Brighton, Minn. Adam Stout, one of the pastors there, asked ORR to make a presentation and discuss issues of racism in a recent Zoom meeting with his church. The other is Calvary CRC in Edina, Minn., which, among other things, held a powerful service of lament a week after the death of Floyd.

Following a church council retreat in 2018, Faith CRC already had the goal of discussing and finding ways of trying to help achieve racial reconciliation in their wider community, said Stout.

They were moving in that direction, starting to explore having a closer relationship with a local black church and discussing other plans in 2019, with the goal of taking some clear-cut action in 2020. But the COVID-19 pandemic intervened.

“The effort wasn’t going anywhere because of the pandemic, but then when George Floyd was killed, there was a lot of outrage and something abstract became a real thing. We couldn’t help addressing it in one form or another,” said Stout.

“Our church was challenged to look at ways we might contribute to the ongoing trauma of being black in America.”

Many members of the church took part in marches across Minneapolis following Floyd’s death.

One of the things Stout did was to preach a sermon series on Amos, a shepherd/prophet who spoke about justice to the people of Israel. Stout continued to explore possibilities of connecting with a local black church. And the congregation connected with ORR, which held the Zoom meeting in early October offering information on racism and a time of worship.

Idella Winfield and Viviana Cornejo, a Race Relations advocate, were part of the meeting, as was Ruthann Crapo-Lin, a professor of philosophy and a racial equity expert from the University of Minnesota Community College.

“The church was already moving on the process of racial reconciliation, but the death of Floyd was like gasoline on a fire,” said Crapo-Lin.

In the online meeting, Crapo-Lin spoke of policies and programs the church could consider looking at if they want to keep moving forward in addressing racial reconciliation. As she spoke, she used Psalm 23 to help illustrate points about churches’ being led by God through difficult to better times.

“My hope is that churches will increasingly see that racial reconciliation is integral to the mission of the church — that this is at the heart of the gospel itself,” she said. “Even talking about this in a church can be hard, but it is so essential.”

Stout said that meeting with ORR representatives, getting advice from them, and hearing from Crapo-Lin was helpful as the church looks to its future. As they move forward, though, it will be important for the members of the church to press on, because not everyone is on the same page.

“If we are going to enter into the vision of God’s kingdom, we have to keep talking and keep working,” said Stout.

Standing in front of the convenience store outside of which George Floyd died, Katie De Kam read from Psalm 6 as part of a service of lament, held on June 1, just a week after Floyd’s death.

A local school teacher, De Kam was one of three Calvary CRC members who read psalms and said prayers as part of that service, which included a mournful song near the end.

“Lord, do not rebuke me in your anger or discipline me in your wrath,” she read. “Have mercy on me, Lord, for I am faint; heal me, Lord, for my bones are in agony. My soul is in deep anguish. How long, Lord, how long?”

As people milled in the background, which featured an image of Floyd painted on a building, De Kam finished the psalm and prayed: “Good God, perfect and holy, you are so much bigger than we are. I’m white and female, and my own experience is so much different from that of people of color in my city. . . . I’m grateful we can all turn to you and lament together and in our own ways.”

Nick Van Beek, a pastor at Calvary CRC, said the service of lament was the beginning of a process in which they now find themselves — trying to sort through how to move forward to address racism in the local community.

“George Floyd’s murder was a tipping point for us. We can’t ignore this anymore,” he said. “How can we as ambassadors of Christ’s love address this — how can we live out justice in the brokenness of our city?”

His church has connected with a nearby black Baptist church, New Creation Baptist Church, and they are working toward developing a relationship.

“While there is much discussion, visioning and praying that still needs to happen, we are convinced this is a great opportunity with them to develop relationships with people of another race, to partner in gospel-centered ministry together, and engage in the ministry of reconciliation with one another,” said Ver Beek.

In addition, the church council has been studying the book Generous Justice by Tim Keller. But as they do all of this, church leaders are sensitive to the fact that they can’t place doing justice before making sure to put the message of the gospel first.

“We are called to proclaim the gospel without advancing a political perspective,” said Van Beek. It can be a fine line to walk, but necessary. “As a church it is very important to understand we don’t have all the answers.”

Awakened by events of this spring, many people in the CRCNA are seeking answers, resources, and a way forward in the face of racism that has become increasingly hard to ignore in our world today, said Mark Stephenson, interim director of ORR.

“Various factors have made us aware of the pain and frustration of personal and systemic racism in the United States and in other countries, especially the horror of watching a man die,” said Stepehenson, referring to Floyd.

“I'm thankful for the increasing interest in dismantling racism among many people, including white Christians. But I hope this isn't just a 2020 thing from which people will move back to business as usual next year.”

Stephenson’s hope and prayer, he said, is “that this year's awakening will bring a real desire for change, especially among us whites who benefit the most from systemic racism.”

Needed will be a focus on developing better relationships with people of color, no matter how hard this can prove to be. This can be done through education and awareness — and especially by simply talking to one another in whatever places we find ourselves.

“But as a black friend has told me more than once, for those of us whites who want to be allies for real change, it is going to cost us, because we'll need to stand against people and systems that allow us privileges and opportunities that people of color do not have,” said Stephenson. “It will cost us, and that's the very thing Jesus calls us to do — to deny ourselves, take up our crosses, and follow him.”