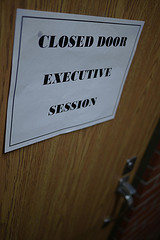 Synod 2012 ruled today that Rev. John Visser, senior pastor of Maranatha Christian Reformed Church in Belleville, Ontario, should be suspended from ministry for at least 90 days for abusing his role as a minister of the Word.

It also reprimanded Classis Quinte, the regional group of churches that includes Maranatha, over its handling of issues involving the church and its pastor.

At issue originally were concerns about a healing ministry at Maranatha. A committee appointed by the classis assessed the situation and issued a report, citing breach of confidentiality by Rev. John Visser, senior pastor at Maranatha. Classis Quinte subsequently voted to depose Visser from the ministry.

Maranatha appealed that decision to the denomination’s Judicial Code Committee, which conducted hearings and made recommendations to synod.

Synod ruled that Visser had not breached confidentiality when he released material to Classis Quinte. However, it said that special discipline should be applied to Visser by suspending him for 90 days.

It said in particular that “Visser abused his office for inappropriate ends and/or self-interest by soliciting and/or allowing a counselee and her husband, both of whom were parishioners, to invest in companies that he and his family owned.”

It authorized the denomination’s Board of Trustees to oversee a process, paid for by the denomination, to evaluate Visser’s “readiness for ministry that focuses on professional competence and personal/emotional status.”

After 90 days, if the Board is satisfied that those conditions are met, it may lift the suspension.

Synod also directed the council of Maranatha CRC to contract immediately for ongoing oversight of the healing ministry at the church by an independent, accredited agency. It said that a church council composed of laypersons is not capable of exercising appropriate oversight.

Synod said that oversight should begin during Visser’s suspension and that Visser may not be reinstated before this condition is met.

Synod noted it did not have the authority to apply special discipline to the counselors at Maranatha because they are not ordained officebearers of the church.

Synod reprimanded Classis Quinte for violating the right of Maranatha to a fair and impartial hearing and opportunity to respond to accusations. It also reprimanded the classis for not directing the dissenting members of the congregation to refrain from publicly circulating their grievances, and for giving them documents to distribute.

Synod also noted its disapproval regarding members who do not present grievances directly to the allegedly offending person or assembly, thereby seeking redress through proper ecclesiastical or legal channels.

Synod did not act on a recommendation that it consider establishing a committee to look into whether church-based counseling ministries should be regulated at the denominational level, since such ministries are proliferating within the denomination.