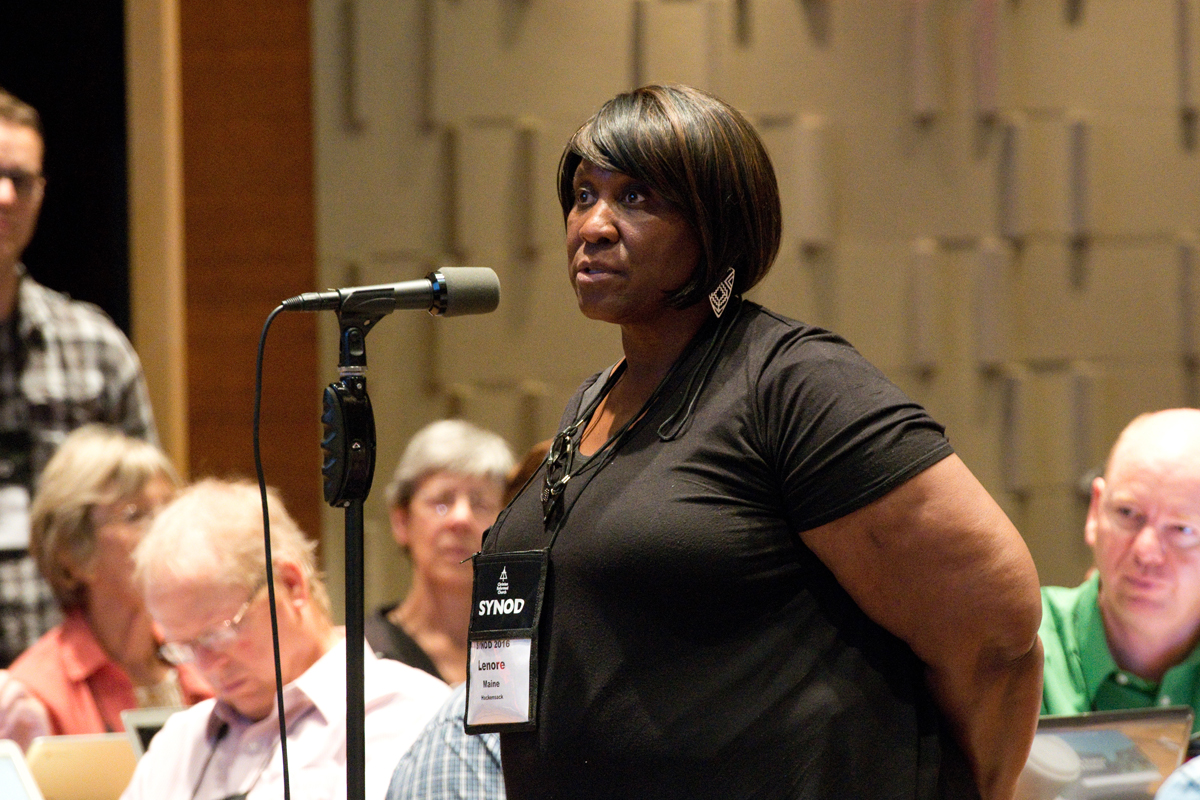 Lenore Maine, Classis Hackensack: Even if others don’t think they need [The Belhar], we in New Jersey need it.

After a lengthy debate, Synod 2016 proposed that the Belhar Confession be recognized as a contemporary testimony of the Christian Reformed Church. This would give it the same status as Our World Belongs to God.

The proposal to recategorize the Belhar Confession is now referred to Synod 2017, which will be asked to make the final decision.

The Belhar is a confession born in South Africa out of the struggle against apartheid. It affirms that the church is a reconciled and reconciling community in Christ, and that anything, including apartheid or other forms of racism, that introduces unbiblical divisions into the body of Christ is wrong and should be condemned.

The South African churches that created the Belhar Confession offered it to the worldwide Reformed community as a new confession.

The Christian Reformed Church has struggled to know what to do with the Belhar.

Synod 2012 decided against giving the Belhar the status of a confession alongside the Heidelberg Catechism, the Belgic Confession, and the Canons of Dort. Instead synod created a new category that it called Ecumenical Faith Declaration - a category not clearly defined or recognized by ecumenical partners in the wider Reformed community.

Classis Hackensack had asked Synod 2016 to reconsider the 2012 decision and to give the Belhar the status of a confession.

The discussion was long, often intense, and showed a desire to reach a stronger consensus on the role of the Belhar confession in promoting reconciliation and opposing racism.

Lenore Maine, a delegate from Classis Hackensack, set the stage for the discussion. She said the Belhar is needed for our collective witness. Even if others don’t think they need it, “We in New Jersey need it,” she said.

She spoke of her anger at the legacy of systemic racism; of being denied participation in the American dream. She told of being a young black girl bused 21 miles to school. One day she was detained by a police officer for jaywalking. By the time she was released, the bus had left. She started to walk the 21 miles home until someone finally gave her a ride. These and other experiences have left scars, she told synod.

Tracie Traylor-Rhodes, also from Hackensack, spoke of her fears for her son. “Where is justice in America?” she asked.

Synod prayed a prayer of lament about racism and violence in our societies. “O God of the cross and the lynching tree,” the prayer began. “Gunshots ring out under the heavens that declare your glory.” The prayer went on: “The streets and the sidewalks of your dwelling place flow with blood.” To a repeated, “How long, O God,” the prayer lamented turning mothers and grandmothers into mourners.

During the discussion, delegate Bruce Dykstra from Classis Atlantic Northeast, argued that the Belhar had been “consigned to confessional purgatory.”

John Meiboom from Classis Toronto, said the Ecumenical Faith Declaration category points outward and not to the CRC itself. “I’m hearing today in more clear terms why we need this [moving the Belhar to the category of a contemporary testimony]. We need it for ourselves.”

Bert Slofstra from British Columbia South-East also spoke of the need for the Belhar to have relevance to the local church. Situated as it now is, he said, “the Belhar says absolutely nothing to the life of the church.”

Some delegates expressed doubt that changing categories would make any difference to the use of the Belhar confession in the churches, but others said it would. Chelsea Harmon from British Columbia Northwest said, “We as a synod. . . said that we denounce systemic racism, and this is a way we take action.”

Wilson asked those who opposed recategorizing the Belhar, “I don’t understand why if it won’t make a difference, we are fighting against it?”

Changing the status of the Belhar does make a difference in the Covenant of Officebearers that all officebearers in the CRC must sign. This covenant now requires officebearers to affirm the contemporary testimony, Our World Belongs to God, “as a current Reformed expression of the Christian faith that forms and guides [them] in [their] present context.”

“If we give the Belhar the same status as the Contemporary Testimony, then every year our officebearers are confronted with the contents of the Belhar,” Slofstra noted.

Some delegates expressed concern that elevating the Belhar to the status of a contemporary testimony and including it in the Covenant for Officebearers would require them to sign a document with which they could not fully agree. They were told that the CRC already allows officebearers some latitude in agreeing to non-confessional statements.