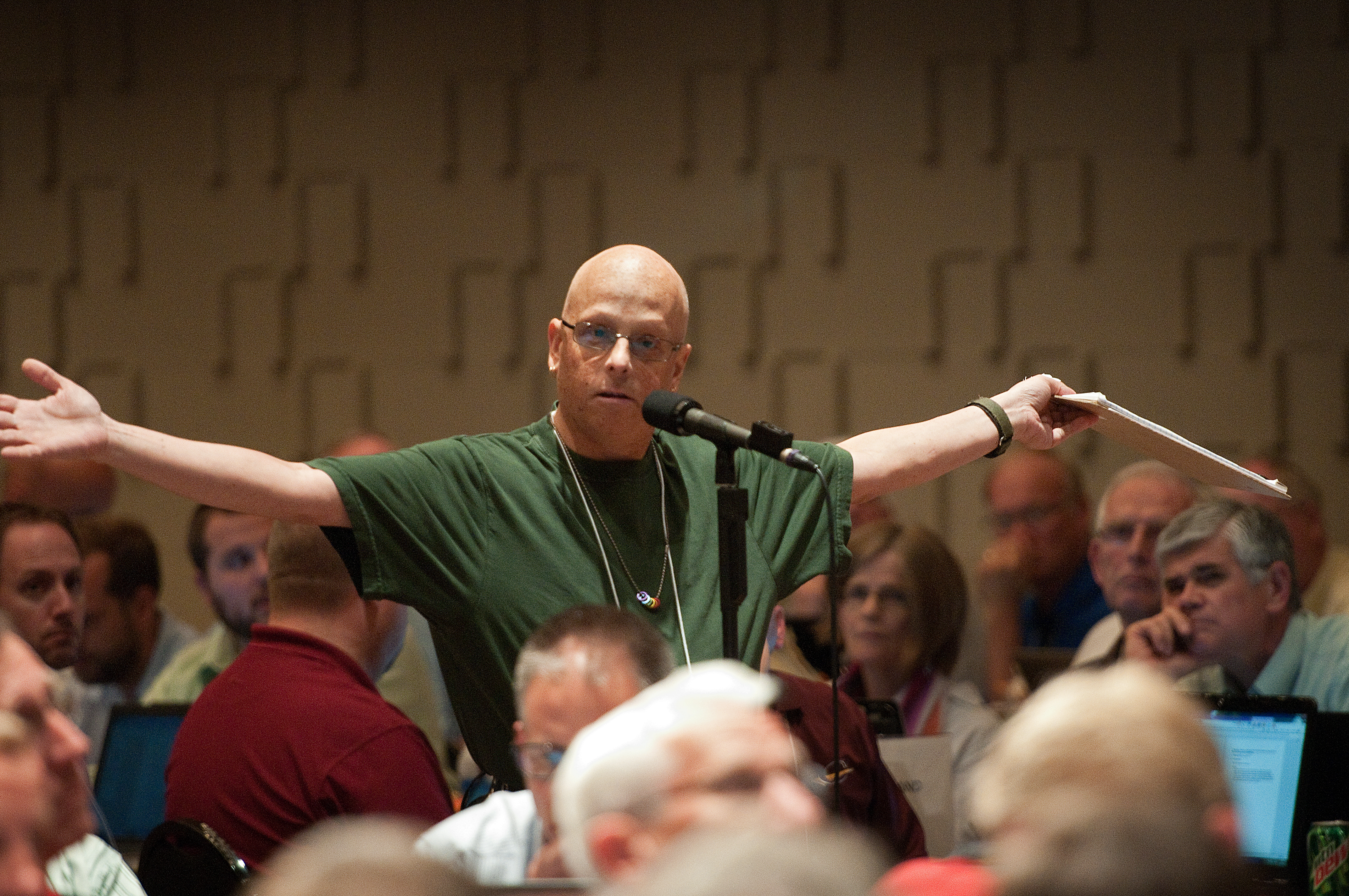 Elder Joseph Bowman, Classis Toronto: “I stand before you as a 40-year-old, single, celibate and chaste yet openly gay man … no longer willing to be silent.”

After exhaustive debate, Synod 2013 decided to appoint a study committee to provide guidance on applying the denomination’s policy on homosexuality to a rapidly changing culture.

The Christian Reformed Church’s position on homosexuality - that homosexual activity is sinful but the orientation is not - is contained in a report to Synod 1973, and reaffirmed in 2002 report on pastoral care.

But delegates decisively rejected proposals to re-examine the CRC’s 40-year-old stance. The new committee’s mandate does not include new biblical or sociological studies.

Instead, a study committee will work on how to communicate the current position in a loving way, given increasing public support for gay marriage and its legalization in Canada as well as in 11 U.S. states and Washington, D.C.,

Pastors said they need help in ministering to gays and responding to those asking to be married. While upholding the 1973 policy, and a 2002 report calling for more gracious outreach to gays, increased cultural pressure has created new challenges and legal issues, they said.

“This mandate is exactly what we need to speak in love towards people who are hurting on all sides of brokenness,” said Rev. Michael Bentley, Classis Northcentral Iowa.

“Obviously we need to understand the pastoral concerns,” said Rev. Chad Steenwyk, Classis Holland. “But when you have pressure ... it colors our ability to look clearly at Scripture.”

Others insisted the CRC should revisit the biblical grounds of the policy because of new psychological, biological, and biblical scholarship over the past 40 years.

“It is people from within our own tradition who are writing the books that I and my friends and many others are reading, that are challenging the assumptions of 1973,” Baker said.

Young adult representatives also made strong pleas for a wider study, saying this is a prime issue for their generation.

“I’m speaking on behalf of all your children and grandchildren when I say this is the issue we are struggling with,” said Laura de Jong, who will enroll in Calvin Theological Seminary this fall. “These are our best friends and housemates and family who are struggling with this.”

Chadd Huizenga, another young adult representative, said language in the 1973 report is “offensive” in calling for churches to help gays overcome their “disorder.”

“This is the women-in-office issue for my generation,” said Cedric Parcels, a young adult representative and candidate for ministry.

“I think we have to listen to our young people,” van Grootheest said. “They are leaving us in droves, and they are telling us this is our major issue.”

But others said that changing the 1973 policy could force them out of the church.

In the debate’s most dramatic moment, elder delegate Joseph Bowman of Classis Toronto said he spent 20 years in therapy trying to change his orientation, to no avail.

“I stand before you as a 40-year-old, single, celibate and chaste yet openly gay man … no longer willing to be silent,” Bowman told the hushed delegates.

Saying he had been excommunicated from another church, Bowman added, “I want to thank this denomination for being affirming of somebody like me.”

Delegates gave him a standing ovation.

The new committee is asked to report to Synod 2016. Its mandate includes using the shepherding model used by the Faith Formation committee, which means that it will engage with churches and classes (regional groups of churches) in an ongoing way, and report to synod yearly on its progress.