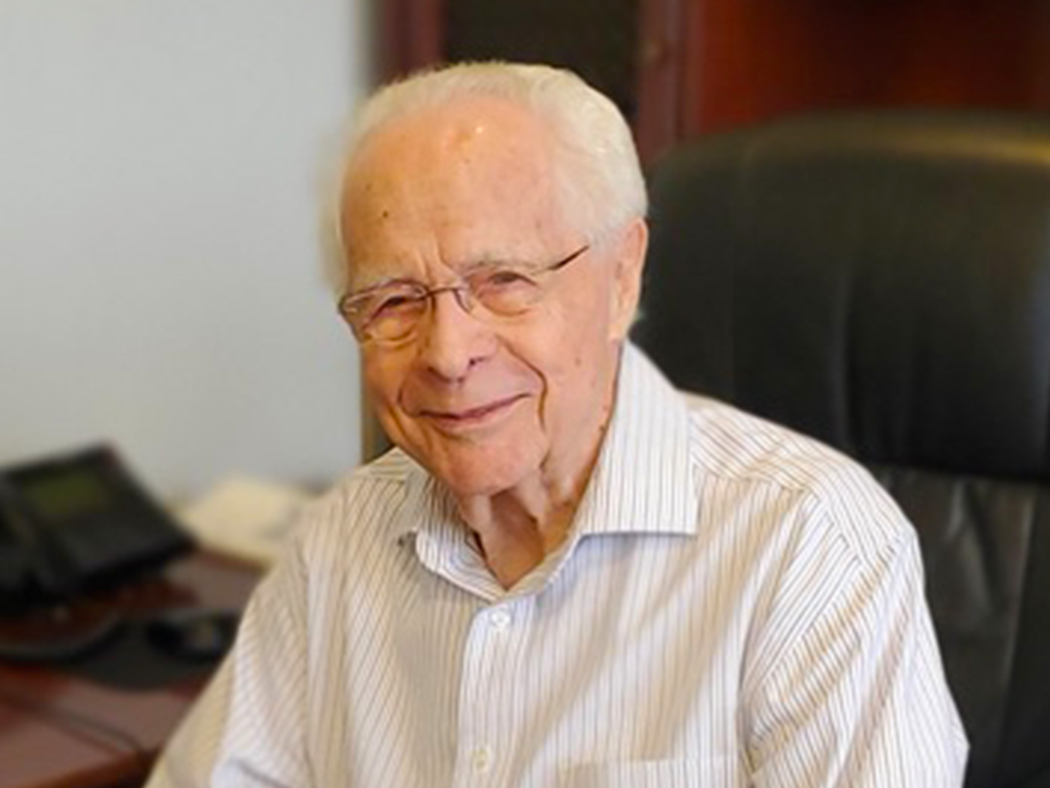 Leonard Hofman has a kind manner, a soft voice, and a gaze that is humble and yet piercing at the same time.

Sitting with him in a comfortable meeting room at a Holland Home retirement facility in Grand Rapids, Mich., I had a chance to hear parts of the life story of this pastor who is celebrating the 70th anniversary of his ordination this year.

As Hofman recounted a few memories, I considered myself fortunate to hear his story. Even though as a news reporter I had covered several synods at which Hofman served as general secretary, I had never before had the chance to visit with him like this. Not one to speak much to the press, he tended to avoid interviews and headlines.

But now Hofman was talking about his life, offering an inside look at who he is and what he thinks about the church he has loved deeply and served in many ways.

When I wondered aloud how he decided on a career in ministry, he told me it came from an unexpected but crucial encounter.

“I was working in a grocery store in Burton Heights [a Grand Rapids neighborhood] when the pastor at Burton Heights CRC, who happened to be shopping in the store, stopped. As we were talking, he asked if I ever thought of becoming a pastor,” Hofman said.

Considering and praying about the suggestion, Hofman said he eventually set aside his earlier plans of becoming an architect and decided to enroll in Calvin Seminary.

After graduating and becoming a candidate for ministry of the Word, he was called to serve Wright CRC in Kanawha, Iowa. From there, he was called to a church in Kenosha, Wis., which he served for five years before moving to West Michigan to pastor three churches and later to begin full-time work for the denomination.

“Early on, after serving two or three churches, I realized I was attracted to administrative work,” he said.

So even while serving as a pastor, he took on various roles.

Hofman served on the Calvin College and Seminary Board of Trustees in the 1970s and became president of the Synodical Interim Committee (similar to today’s Council of Delegates) in 1978. He was appointed to be stated clerk of the denomination in 1982, and that role changed into the position of general secretary in 1990 as Hofman continued serving until 1994. “I was very involved in the life of the church,” he said.

Throughout that time, Hofman spoke often at events, marking one development or another in the church. When he did, he sought to include everyone in his audience in what he said. He also strove to make clear that the CRCNA was the church that had formed him, and that he loved serving it.

“I’ve always tried to be pastoral in my approach,” he said. “I’m not sure I always did a perfect job, but I tried to speak clearly and carefully.”

I recall that at several synods I attended in the 1980s Len Hofman deftly steered delegates through issue after issue.

In all, he was present in one capacity or another at 35 synods. Back when I was religion editor of the Grand Rapids Press in the 1980s, synod ran for two weeks. It was always a long haul. But through it all, day after day during synod, whether the issues were contentious or mundane, Hofman and others quietly but firmly guided the annual meeting.

As I recall, one of the issues causing conflict back then were arguments over the literal meaning of the six-day creation account in Genesis. Things got pretty heated at times when a prominent businessman posted full-page ads in the Grand Rapids Press about it. One night the discussion got particularly frenzied, and Hofman had to help firmly calm nerves.

Other topics at that time included the role Reformed churches were playing in either opposing or accepting the policy of apartheid — the official separation of races — in South Africa.

And one issue that particularly stood out had to do with the debate over the role of women — and whether or not they could be ordained as pastors — in the church.

That issue was the topic of several study committees, which kept reviewing the issue and reporting back to synod year after year — for the most part inching toward the current position of allowing churches to decide their own stance on ordaining women.

“I tried to be neutral and listen to both sides on this,” said Hofman.

He said he especially recalls leaving synod for lunch one day and returning to see the entire area where synod was meeting, including the seats where delegates sat, lit up by burning candles. Holding the candles, it was a way for women to show their desire for change, he explained. “It was really something. Everyone was holding a candle,” he said.

Because the church did open ecclesiastical offices to women in the mid-1990s, dozens of congregations left to join other denominations or to form their own.

“It hurt my heart to see that happen,” said Hofman, who retired from serving as general secretary in 1994.

After leaving that role, he took on other tasks in retirement, such as helping to lead the National Association of Evangelicals, an association of nearly 50 member denominations. As an officer of that group, he said, he was involved in conventions across the U.S.

He also served as the CRCNA’s secretary for the Interchurch Relations Committee for eight years.

“Overseas meetings with representatives of other church groups and denominations brought me to the Netherlands, twice to South Africa, and to Jakarta, Indonesia,” he said.

Hofman is also the recipient of many awards for his work in helping to knit and shape and guide the CRCNA through some tumultuous years.

Sitting across from us on the day we met was Laurie Harkema, Hofman’s daughter who lives in Okemos, Mich., and is currently a member of the CRCNA’s Council of Delegates.

When her father expressed regret that his busy life conducting the business of the church took time away from his wife, Elaine, who passed away several years ago, and his four children, Laurie disagreed.

“No, Dad, we never felt that way. We always knew we were preacher’s kids and that you loved us,” she said. “Actually, it was kind of good. Wherever we went, everyone knew our Dad, and they knew who we were.”

When I asked Hofman his thoughts on where the church is today, he said he has concerns that issues in today’s world could cause trouble for the church to which he has devoted much of his life.

It will hurt his heart again, he said, if churches leave. He asks churches to consider the importance of fidelity, of being committed to the Church Order and interpersonal relationships.