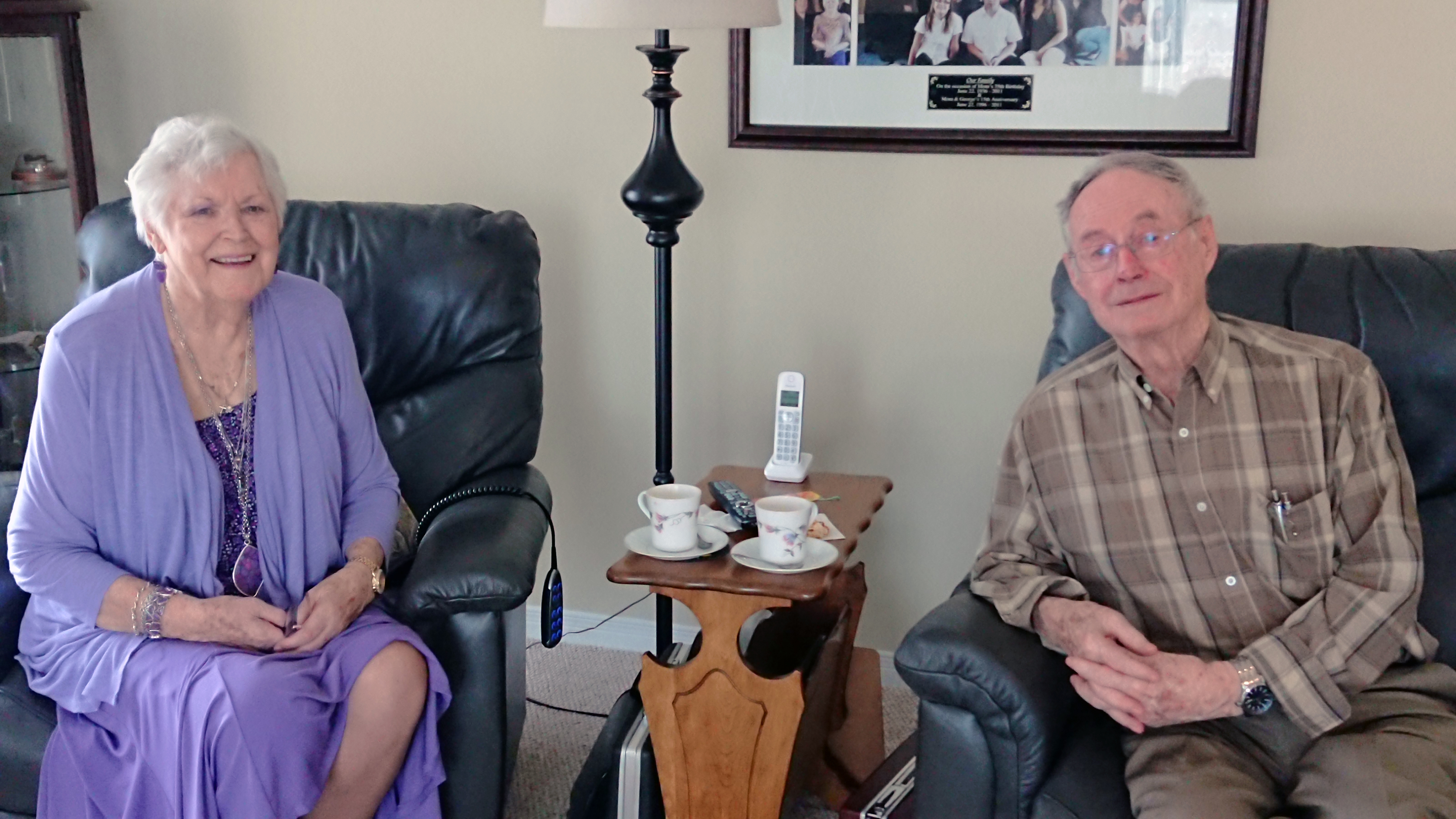 George St. Cyr didn’t talk about his World War II experiences for almost 50 years – not until he met his wife, Renee, and learned that his regiment was among those that liberated the small Dutch town she was from.

St. Cyr was only 17 years old when he went to the military recruiting office in his hometown of Montreal, Que.

“I found out that I was too young to join the army,” the now 94-year-old member of Heritage Christian Reformed Church in Brampton, Ont., recalled. “At 17, I could join the navy, but to join the army, you needed to be 18 or have your parents’ permission.”

Not eager to go to war by sea, St. Cyr convinced his parents to give him permission to join the army instead. He soon found himself in basic training in Quebec.

After this initial training, St. Cyr went to Camp Borden in Ontario to receive additional training, such as in how to drive a tank, shoot a gun, and operate wireless communications. This extra training boosted his salary from $1.50 to $1.75 per day.

After further training in England, St. Cyr was 19 by the time of the D-Day invasion, June 6, 1944. And prior to that, he said, he had not seen active duty.

“All the roads leading to the ports [in England] were packed on both sides of the road getting ready for the invasion,” he recalled about that day. “You knew something was going to happen. You’d listen to the radio, but there were no reports. They just kept [everything quiet while] moving us closer and closer to Portsmouth.”

Eventually the mission became clear. The army wanted to get as many people and materials landed on the beaches of Normandy as possible. To assist with that task, the English had created portable docking sites known as “Mulberry” harbors.

Parts of these harbors were carried across the English channel by tugboat and then assembled on the beach to assist with the efficient off-loading of troops and gear.

St. Cyr was part of the second wave of troops to hit the beaches.

“I went on a tugboat,” he explained. “There were no quarters. You just found a couple square feet and waited, waited, waited. As you got closer, you could hear guns going off. You started asking yourself what you were there for. It wasn’t fun and games anymore.”

After surviving the perils of landing on June 6, St. Cyr settled in to a small camp and was eventually assigned to the 12th Manitoba Dragoon regiment, army recognizance, as a tank gunner.

“All I knew was front-line work and recognizance,” he said. “Our job was to find out where the enemy was. When we found them, they got hostile.”

Sometimes they had access to military supply lines, where they could receive food, supplies, and even mail from home. St. Cyr recalled that one day an army jeep pulled up alongside his tank and asked if anyone there was named St. Cyr. The soldier in the jeep handed him an unusual package from home.

“My father had been walking along Ste. Catherine Street in Montreal. He passed a delicatessen and remembered that I liked salami,” he said. His father bought a salami, wrote St. Cyr’s name on the butcher paper and dropped it in the mail. He didn’t even use a stamp.

The package made it all the way to St. Cyr in his tank.

“I remember that I was really tired that day. My seat as a gunner was just a small circle, and I was in agony if I spent a lot of time on it. Receiving that package really cheered me up. I pulled out my knife and cut big hunks and passed them around. I was really popular that day,” he smiled.

Other times, though, St. Cyr and his regiment were cut off from the rest of the army.

“We never had a planned place to sleep at night. You never knew where you were going to be,” he said. They slept under their tanks, in abandoned homes, and in haylofts. “I didn’t sleep in a bed for six months, and I had only one hot shower the whole time I was there.”

When supply lines couldn’t reach them, the regiment had to make do with the canned food they carried. If that ran low, they scrounged up what they could find.

One particularly strong memory for St. Cyr was that after the army had liberated a concentration camp, he and his regiment stayed behind to protect it until the prisoners could be properly evacuated.

“The people in the camp were just skin and bones,” he recalled with tears in his eyes. His regiment remained there for a week with only the supplies they had carried in. “We shared what we could, but we couldn’t do an awful lot,” he said.

Another time, St. Cyr was sent to help out at a field hospital for a day.

“I watched the people come in and the stretchers pile up,” he recalled, his voice cracking as he thought about the sheer volume of dead and injured people. “That’s the problem with war. People get hurt.”

The closest St. Cyr came to getting seriously hurt himself, happened while he was in Belgium. His commanding officer had asked him to operate a field telephone in the hayloft of a barn while the rest of the troops advanced. On his own, St. Cyr was tasked with keeping an eye out for the enemy.

When the enemy arrived, St. Cyr alerted his army’s artillery, and the shelling began. The Germans must have realized that someone was in the hayloft giving away their location, because they began firing on the barn.

“I prayed a lot,” St. Cyr said about that experience. Bullets whizzed by him through the hay, but they all missed.

“I decided to head to the abandoned farmhouse on the property, but then I missed the first rung on the ladder.”

He landed with a thud, but got to his feet and ran to the house. The doors were all locked. Fortunately one was made of glass.

“I ran through that glass door, slid across the floor, and went into the basement,” he said.

Climbing down the basement stairs, he discovered it was partially flooded with a few feet of water. St. Cyr sat on one of the lower steps above the water line. Bloodied and covered with shards of glass from the broken door, he waited for the shelling to stop.

“The whole house came down on top of me,” he said next. He waited until it was quiet. Hours later, he worked his way out and then set off to find the rest of his regiment. He knew which way they had headed, so he set out on foot and eventually found them in the home of a Belgian doctor.

St. Cyr says that he and his regiment were blessed. There were 12 of them all together, and each one made it safely to the end of the war.

After returning home, St. Cyr fell in love, got married, and received several medals for his service during the war. These included medals from France and Holland. Yet St. Cyr didn’t like to talk about his war experiences.

“Being a front-line soldier, you witness a lot of horrible things,” he explained, saying that he wanted to put most of those memories behind him. He added that when he returned from Europe, many of the other people around him had also served in the war, so they too had been through terrible experiences. You soon realized that what you had done yourself “wasn’t so important,” he said.

In the next several decades after the war, St. Cyr was married and widowed twice, with each marriage lasting 23 years. Then in 1995 he met Renee. Their first date was on a Saturday night, where they talked over coffee for hours.

“At the end of the evening, he asked when he could see me again,” said Renee, who was 59 when she met George, who was then 70. “He wanted to get together on the next day. I told him that I couldn’t because I had church first thing in the morning and then I always went to visit my mother.”

The next morning, Renee’s phone rang bright and early. “George wanted to know if he could come to church with me, and meet my mother afterwards,” she said.

George went with Renee to her Christian Reformed church, and the couple haven’t missed a Sunday of church together since.

As George and Renee got to know each other, she asked him about his wartime stories. She had been a young girl in Holland during the war and had moved with her sisters and mother to Canada in 1953.

George dug out a box of war medals and photos and began to talk about his experiences. One photo in particular stood out to them both. It was an image of his squadron standing in front of the city hall in Leeuwarden, where Renee had grown up. Renee was only nine years old at the end of the war, and she recalled troops handing out chocolate bars as they liberated her town.

George likes to joke that he had handed her one and had told her to come and find him when the war was over.

This year marks the 75th anniversary of D-Day. Renee remains grateful for George and all the other personnel who served to help liberate her country and bring an end to the Second World War. And George has a bit of advice for the many Canadians and Americans who have never lived through experiences like his: “Pray every day that you aren’t involved in a war.”