The Reformation Gave a Musical Voice to Everyone 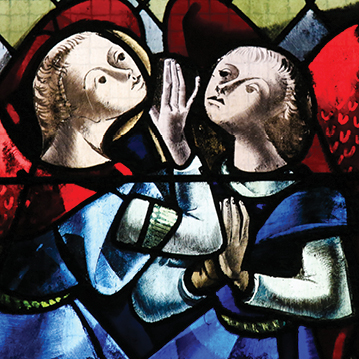 As a result of the Reformation, which began 500 years ago, the common people were able for the first time to sing during worship services.

Before the Reformation, music during worship was mainly performed in the form of Latin chants by cantors, monks, and other designated persons in the Roman Catholic Church.

“An amazing thing happened because of the Reformation. The voice of the people was restored to them in worship,” said Emily Brink, a senior research fellow at the Calvin Institute for Christian Worship.

“There was a lot of rich, beautiful music that took place during the Mass in medieval times, but the people didn’t sing it.”

Once the Reformation took place, the Bible was translated into various languages, making Scripture more accessible to people, while Reformers such as Martin Luther and John Calvin began to write music and put it to words.

“Luther was a trained musician and started to make music available to everyone because he believed everyone should have the chance to participate in the liturgy,” said Brink, who is helping to coordinate two ecumenical worship services celebrating the growth of sacred music over the past 500 years.

“We will be celebrating the 500th anniversary of the Reformation on that day and all of the music that has come out of it,” said Brink.

“The services (each will be the same)  will be a chance to learn from one another and to enjoy the music from many sources. There also will be a premiere of a bilingual psalm setting by Tony Alonso and Adam Tice.”

At the heart of the service will be the Reformation and how it transformed and greatly expanded the use of music as part of worshiping God in liturgies and how it influenced both the sacred and even secular realms, said Brink.

Speaking about one of his greatest loves, Luther once said: “Music is God’s greatest gift. It has often so stimulated and stirred me that I felt the desire to preach.”

For his part, Luther worked mainly with creating hymns and chorales, or melodies, to accompany them. “He hired the best qualified poets and composers to help him,” said Brink.

Similarly, many Lutheran pastors “discovered their poetic gifts, providing for the people biblical songs to sing,” she said.

Lutheran music, which began to grow in popularity in the 16th century, inspired such composers as Johann Sebastian Bach, the 18th-century Baroque-era composer “who stood on the shoulders of that heritage beginning with Luther,” said Brink.

Bach knew hundreds of hymns and used them in such works as his Passion According to Saint Matthew.

John Calvin, who was based in Geneva, also sought to bring music, sung and played by the people, into worship. For his part, he focused on the Psalms, finding noted writers and composers to adapt the Psalms and put them into settings for people to sing.

“In the Catholic Church, they had chanted the psalms straight from Scripture; they weren’t organized in a way in which ordinary people could do it very well,” said Brink.

“Since both Luther and Calvin wanted people to sing, they chose melodies in frameworks that people could handle.”

People loved to sing folk songs in the general culture, and many folk melodies, along with some song texts, were adapted for church music.

Calvin, for example, had people put the Psalms into patterns with rhymes that made them easier to sing during worship.

These psalms made their way into books called psalters for Reformed churches in Switzerland, France, Hungary, the Netherlands, and elsewhere.

“They became very popular,” said Brink. “But as beautiful as these psalters were, they were a product of particular times,” and eventually many psalters were published together with collections of hymns.

Then in 1987, the gray Psalter Hymnal, of which Brink was the editor, was published. And in 2013, more than 25 years later, the denomination published Lift Up Your Hearts, its first bi-denominational hymnal, compiled in cooperation with the Reformed Church in America; this volume contains psalms, hymns, worship songs, and many liturgical prayers and readings based on Scripture and the creeds and confessions.

In this history, you see the development of a denomination that has grown in its taste for and acceptance of a wide range of sacred music, said Brink.

“As time has gone on, churches with deep historical roots [in various countries] have been transferred into new places and cultures and, as a result, the diversity in music has grown,” Brink added.

The 500th-anniversary service of Scripture, prayer, and song at LaGrave Avenue CRC will take place at 3 p.m. and 6 p.m. (with the same program at each service) on Oct. 29, which is being celebrated as Reformation Sunday in the CRC.

This service will include participation by ministers and leaders from both Protestant and Catholic traditions, as well as

These services are cosponsored by the Calvin Institute of Christian Worship, the Grand Rapids Chapter of the American Guild of Organists, and LaGrave Avenue Christian Reformed Church.

The CRC has made available a wide range of resources to help churches mark the 500th Anniversary of the Reformation.