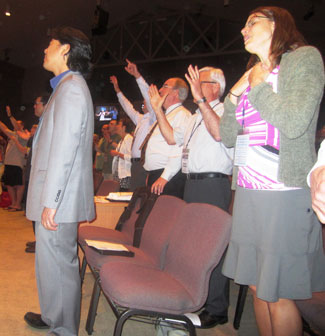 The Christian Reformed Church’s first-ever Prayer Summit came to a close on Wednesday morning after people participated in the Lord’s Supper and then heard a final prayer of blessing and encouragement.

Arms raised,  Rev. Joel Boot, executive director of the CRC, gave the prayer, starting out by thanking “our Korean brothers and sisters for the privilege” of being asked to participate in the Summit.

It was the idea of the Korean Council of Christian Reformed Churches to invite the denomination to take part in three days of prayer and praise.

The denomination accepted and more than 400 members of the CRC from all over North America took part in the event.

In the final prayer, Boot also said he hoped people left the Summit feeling the comfort of God’s grace and remained aware of the blessings that come from prayer.

He ended with this request: “As you return to your churches, don’t give up on prayer, but pray more fervently so we can get together again next year.”

Coffee Break focuses on prayer and Bible study in small groups and is currently at work in several countries around the world.

VanderGriend also spoke about the significance of the Summit as being an event that in many ways culminates and starts a fresh life for prayer efforts in the CRC.

“God’s grace through prayer is reaching more and more people, causing thanksgiving to overflow for the gospel,” said VanderGriend, who currently serves with Harvest Prayer Ministries in Terre Haute, Indiana.

“We need to keep praying, especially for God’s lost sheep,” he said. “I see this Summit as being the threshhold of a new beginnning of prayer that will spread through the churches and around the world.”

The notion of holding a large event like the Summit came from a small group of Korean CRC pastors who started praying together two years ago on Saturdays, seeking God’s blessing and guidance on how they could renew their churches.

As they prayed, they received answers to some of their specific challenges, but also discerned, they said, God asking them to do something bigger -- such as holding a denomination-wide Prayer Summit. That was late last year.

Along with the Korean Council of Christian Reformed Churches, they also determined God wanted them to have the Prayer Summit this Spring, preferably in April.

As a result, many things had to happen in a fairly short period of time if the Summit was going to occur.

But all of it got done and the Prayer Summit, whose theme was “Seeking God’s Face,” became a reality

The Summit started on Monday with song and praise and a presentation by Rev. John Witvliet, director of the Calvin Institute of Christian Worship in Grand Rapids, Mich.

In his talk, Witvliet said it is essential to pray to “the one God who is good and great, our God who is the fountain of all goodness.”

It is crucial, he said, to know that this God “is at work in us and among us. God is beside us at all times.”

Richard Mouw, president of Fuller Theological Seminary, also spoke, reminding people of the need to pray for those who are being treated unjustly, as well as to act prayerfully on behalf of these people, whether they are overseas or closer to home.

Between speakers and workshops, people had chances to gather in groups to pray. Participants also had the opportunity to join members of All Nations Church for dawn prayer on Tuesday and Wednesday.

Rev. Tae Kim, one of the main pastors at All Nations Church, said over coffee in the church’s cafeteria on Wednesday morning that he believed that “God has showed up here over the last two-and-a-half days.”

All Nations CRC has about 2,500 adult members and joined the CRC about 10 years ago.

Being the host church for the Prayer Summit was a great honor and opportunity to showcase their church as well as to serve members of the denomination, said Tae Kim.

But, above all, it was a time of being able to pray together. “There is so much power when you come together and pray in one voice.”

Because people from so many different places and ethnic groups showed up for the Summit, said Tae Kim, “I think we’ve seen a reflection of heaven here this week.”

About a half hour after the Summit ended, Steve Yoon took a break and sat in a chair in the nearly empty sanctuary.

Yoon coordinated the small army of more than 200 church members who served as volunteers at the Summit.

A deacon at the church, he looked at the rows of seats in which people had sat, taking part in the Lord’s Supper, just a little while before.

Yoon, an engineer by training, smiled and shook his head as he took in the scene.

Yoon said it was hard to believe all of the work that he and his crew of volunteers carried out, doing everything from cleaning and providing food to shuttling Summit participants from their hotels to and from All Nations.

But the biggest thing that stands out, amidst all of the work, is the realization that he has so many non-Korean brothers and sisters in Christ.

The Prayer Summit brought home to him the reality that the Korean church that he cares about so much is part of this much larger body, the Christian Reformed Church.

He knew that All Nations was part of the CRC. But meeting these members from so many other places and praying with them, as well as serving them as a volunteer, truly touched  him.

“I didn’t really know much about the denomination,” he said. “This was really eye-opening for me. I’m part of a family that I didn’t even know I had.”