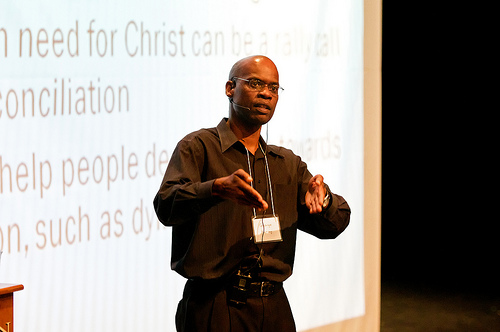 Bing Goei cut short his acceptance speech on Friday night after the Christian Reformed Church's Office of Race Relations gave him one of its two inaugural awards for being "a champion of ethnic diversity" in the CRC.

A former director of the CRC’s race relations council, Goei helped to craft a report on diversity in leadership that is being discussed at Synod 2011.

Goei, a Grand Rapids, Mich., businessman and race relations advocate, had to leave the Multiethnic Conference to speak to a synodical committee that is reviewing the report.

The Multiethnic Conference is meeting on the campus of Calvin College in Grand Rapids, Mich., as is Synod 2011.

Among other things, the diversity report, adopted by the Board of Trustees of the CRC in February, calls for hiring to be done in accordance with the church’s diversity objectives, including a goal of having 25 percent of the denomination’s top leadership positions filled by racial minority leaders.

Critics of the report say that the church should study this issue further before adopting the hiring plan.

"Christ shed his blood for everyone, not just white, black or brown people…This synod is being asked to make some very important decisions," Goei said just before he left.

Rev. Emmett Harrison, a CRC pastor in Cleveland and one of the organizers of the Multiethnic Conference, handed out a second award to Jackie Venegas, widow of Rev. Dante Venegas, a former co-pastor at Madison Square CRC, the Grand Rapids church hosting this year's synod.

Dante Venegas passed away in 2007 after a long struggle with cancer.

"Pastor Dante was a dynamic servant of the Lord," said Harrison. "He was a trainer, a mentor to many people, including myself. His ministry started on the streets of New York City. He went through the hard trials of the street life and he was in jail, facing 40 years of hard time, when the Lord lifted him up and dropped him in the blood of Jesus Christ."

"Pastor Dante preached the power of God. He was a great and pioneering force in the CRC," said Harrison.

Jackie Venegas, Dante's wife, accepted the award for him. "Thank you for this award," she said. In many ways, she said during her short acceptance speech, the CRC wasn't sure what to do with her husband – a black Puerto Rican from Spanish Harlem.

"He shook things up in the denomination and paved the way for many others," she said.

Members of the conference then spent time in prayer, asking God to give delegates to this years' synod wisdom to make the right decisions on the matters, including the diversity report, placed before them.

The awards were handed out before the keynote address on the current state of race relations given by George Yancey, professor of sociology at the University of North Texas.

Yancey focused on the positive changes that the United States has made in race relations since the mid 1990s. But, he said, the struggle for equality is far from over.

In the mid 1990s, rioting erupted in Los Angeles, Calif., and other communities over the videotaped incident of the police beating a black man named Rodney King.

"Until those riots, people thought there no longer were any racial problems," Yancey said. "The Rodney King riots showed us" how much racial hatred still existed in the seemingly calm and racially accepting lives of many people.

Since then, discussions have occurred and changes have happened, he said. Nonetheless, people of all races, unless they really get to know one another as friends and colleagues, still harbor misguided notions about people of races different than their own.

"Race remains a big gap for many people here in the U.S. today,” Yancey said. “The issue is out there."

He said that the solution to racism and disunity has to come from the Christian church – that is, if its members take the words of Christ, who called people to love one another, as seriously as they say that they do.

"Racism is first and foremost a spiritual problem, and not a social problem," he said, adding that people need to truly search their hearts and motives to see if what they believe and what they do matches the teachings of Christ.

"We talk so often about how we are different, but let's talk about what ties us together. We have more in common than differences. As Christians we need to 'die to ourselves' and to think about others. We need to try to see things from another person's perspective."

Just because there are multi-racial churches does not mean that the problem of racism is solved, he said. "We really have not seriously dealt with it in the church …The part of loving one another is to truly understand one another."