A Ministry of Stories 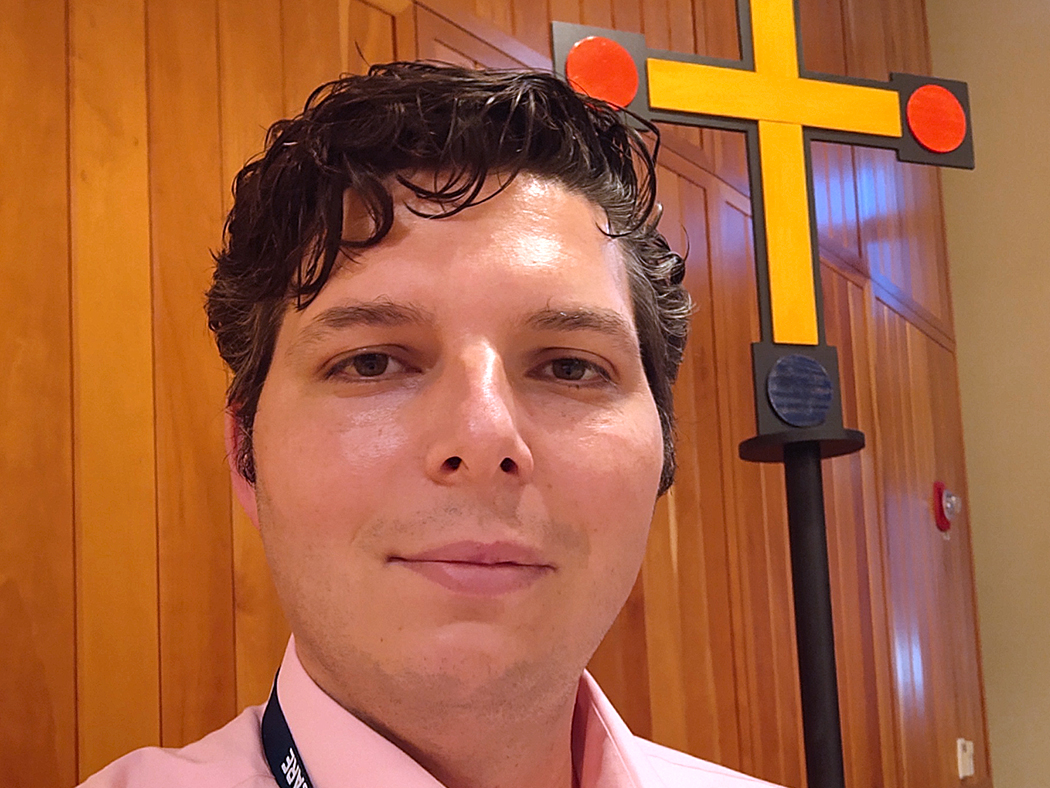 During Hispanic Heritage Month, which runs from Sept. 15 to Oct. 13 in the United States, CRC News is presenting weekly stories on Hispanic leaders in the Christian Reformed Church in North America. This is the fourth in the series.

Growing up in Chicago, Christian Reformed Church hospital chaplain Marc Zumhagen loved to hear stories from both sides of his family.

His love for stories developed into a hunger that was hard to satisfy, he said, and to an extent he became the keeper of family lore -- even his parents would go to him to hear aspects of one family tale or another.

“No one knew for quite a while that I had picked up on Spanish, so I could listen in on the fights and conversations,” said Zumhagen, who now serves as a night chaplain at the Cincinnati (Ohio) Children’s Hospital Medical Center.

Listening in to both sides, he said, offered him glimpses into two different worlds -- a more outgoing and colorful Mexican side with lots of parties and get togethers and a more reserved German side, where the love was present in a quiet way.

One day, for example, his grandfather was making coffee with an unusual device called a Chemex, so Zumhagen asked about it, only to learn that the hourglass-shaped coffee maker was given to him by his family -- and they talked about the story behind the gift.

“I was able to develop a deep understanding of what people were saying according to their cultural context. These were two totally different worlds,” he said.

On the Mexican side, his grandmother was an inspiring example of radical hospitality. She was forever sending her grandchildren with plates of food to feed people in the neighborhood, or workers in the area, or even the guy at the convenience store. “She had, like, a community ministry. Everyone knew her and she knew everybody,” he said.

Zumhagen said he never even dreamed of one day being a pastor until his grandfather asked him, after a deep conversation, if he’d ever thought of it.

And then there was the time he and his family were at a homeschool convention.

“I was homeschooled,” he explained. “I remember that this very tall African American man sat next to us. He looked at me and said, ‘You are going to do great kingdom work. You will be able to understand people’ -- and he put his hand on my head and prayed over me.”

However, said Zumhagen, being a preacher -- as in wearing a black robe and “talking about Bible stories every week” -- didn’t sound like much fun to him at the time.

Growing up, he said, he had the opportunity to experience a variety of churches. On the German side of the family was the local Missouri Synod Lutheran Church, and on the Mexican side there was a Catholic, a Hispanic Mennonite, and also a nondenominational fundamentalist congregation, in which he became involved with diaconal ministries through his teen years.

Zumhagen and his family got connected to the CRC when Rev. Henry Reyenga, a patient in his father’s medical practice, invited them to a church plant that was just beginning. Learning about Reformed theology and how faith is active in all parts of life energized him and deepened his curiosity about entering ministry.

It was during a time of mentorship with Rev. David Feddes and Rev. Henry Reyenga that he discerned his call to ministry, said Zumhagen.

In those years, he earned a bachelor’s degree at a college in Chicago and then took courses at Calvin Theological Seminary.

Later, for a time, he served at a church plant in Grand Rapids, Mich., and then worked in advancement for Christian Reformed Home Missions, now part of Resonate Global Mission.

But the job didn’t turn out very well, he said. Every time he met with a potential donor and they got to talking, Zumhagen was far more interested in learning about the person’s story than raising money.

“I was a terrible fundraiser,” he said. “I ended up hearing about their spiritual struggles, and it turned into a pastoral care visit. How could you hear such deep sharing and vulnerability and then ask people for a large sum of money?”

One day Zumhagen shared his struggle with Mark Stephenson (then interim director of Chaplaincy and Care), and he suggested checking into becoming a chaplain and arranged for Zumhagen to attend an upcoming conference.

“[The event] was in the seminary bookstore basement, and from the first moment I walked in, I felt at home,” he said. He met mentors and found that chaplains like to tell stories about their own lives and their work.

“I stumbled into it,” he said. “I left Home Missions and moved to northern Kentucky, hoping to do my Clinical Pastoral Education work at a children’s hospital there, but they were full.”

During that year, he was able to start his Clinical Pastoral Education at a local nursing home. Then he served on a unit at the local VA hospital, and finally he did land a job at the children’s hospital. That was a decade ago -- and he has loved the work, he said, especially because serving in a medical setting is a vocation rich in storytelling.

But these are not necessarily happy stories you tell around the campfire, he added; these are often heartfelt, grief-ridden emergency room and intensive care unit stories.

“I find myself, as the overnight chaplain, dealing with a lot of end-of-life and trauma work,” he said. “I’m really able, even though these are tough stories, to help the staff and patients engage in the radical hospitality of sharing one’s real stories, like those that I learned when I was growing up.”

A story from last spring comes to mind, he said. A family from Guatemala had a child with a heart and  kidney condition staying at the hospital. “These were grief-stricken people in a crisis,” he said. “But I got to know them. I asked them to tell me their story. I asked questions about their child when she was well. We talked about the hopes they had for their child.”

Meanwhile, as he slowly got to know the family, the medical staff informed him that they had started to employ heroic measures to keep the child alive. Her condition was deteriorating. The staff knew the outcome would not change but kept implementing more involved and complicated measures, feeling that was what the family wanted.

But Zumghagen also gently asked the family about how they would know when it was time to let go of their daughter. They shared that they knew she was very sick, and they didn’t want her to suffer; they also trusted that she was in God’s hands and that God was giving the doctors new ideas that might help to cure her. They shared that they would know it was her time when the doctors said there was nothing more they could do.”

Zumhagen relayed this to the medical staff, and that was a relief to them, he said. They were able to dial back on extra measures and to gather the family in the room -- again to tell stories.

“The actual end was peaceful, calm,” he said. “That has changed how the staff offer interventions. Once they knew the story and how the family felt, it allowed for a very good death.”

Deaths have, however, been too common in the past couple of years, and situations have not always been so good when Zumhagen has had to work in an emergency room overcrowded with children who have COVID-19, he said.
“There have been many deaths,” said the chaplain. “You go into the emergency room and into the trauma bay, and it is a mess to see kids so sick with COVID.”

But as difficult as that has been, he said, he has also found himself needing to respond frequently to staff who are distraught and overwhelmed with their work.

With the support of other chaplains, with whom he can share his own struggles, Zumhagen said, he has been able to help staff and appreciates it when a nurse or doctor comes into his office, sits down, and unloads their pain.

Many challenges remain, and the emotional toll can be rough on everyone, but being a chaplain -- from a family that told so many stories -- is deeply gratifying, he said.

“The chaplaincy has provided a context to use my gifts fully and to do the ministry I was called to do,” said Zumhagen.

God is pleased to see the use of his gifts when we serve others, he said. “In my case, I know that God has given me the task and grace to hear some awesome and inspirational stories.”