Makings of a Microchurch 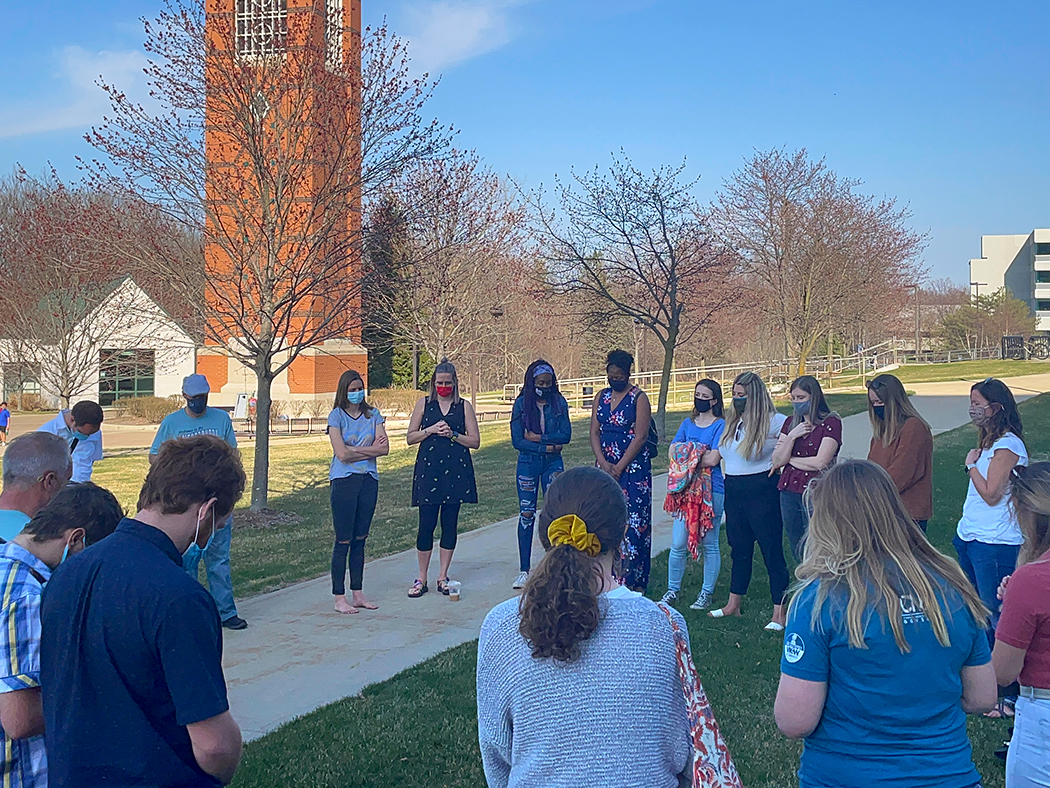 Brock Rubin recently graduated with a major in finance and Spanish from Grand Valley State University in West Michigan and plans to take a job at the headquarters of a grocery chain.

When he starts work, he also will have a background in sharing his Christian faith in subtle ways with others.

During his four years at Grand Valley, Rubin was involved in a variety of roles with the Christian Reformed Reformed Church campus ministry there. He also learned about a new church planting movement of starting “microchurches.”

“I will be wondering, ‘How do you form a community in a corporate setting?’” he said. “I think of the Bible verse, ‘Whoever has ears let them hear’ (Matthew 11:15).”

It may seem a bit odd that the graduate of a secular university will step into a corporate job as a business analyst with evangelization on his mind. But Rubin is among many GVSU students who have been touched and shaped by the campus ministry in their years at the university — and have learned new methods of evangelization.

Rubin has been trained — through supervision of small groups and through one-on-one discipleship with a campus ministry leader — to look for and take advantage of ways to encourage the formation of a faith community in the world beyond college and even outside traditional forms of the church.

“I have a call to work in finance, but I’ll go into the job along with all that I have learned and received from campus ministry,” said Rubin. He will essentially be thinking of forming a “microchurch.”

Whether that happens at work or not, he is also equipped to form a microchurch in his neighborhood or as a ministry out of a church he decides to attend.

“Long ago, God called people into smaller communities,” he said. “I think microchurches are a reversal to get back into a community where people know your name and can be called out to use the gifts that they have.”

A movement currently under way in various denominations, microchurches can take on many forms, both inside and outside of a formal church setting. They are creative attempts at connecting with people and forming small groups in whatever places people find themselves — and this can include a corporate office.

“Microchurches are intentionally simple, and we are helping students to learn to embody faith wherever they are,” said Scott Stark, director of campus ministry at GVSU. “There is a special focus on unchurched people.”

Although they are leading students such as Rubin along the road of creating small faith communities, they haven’t started a formal microchurch program yet, added Stark.

The plan is to launch a formal microchurch leadership training process that includes a connection with Calvin Theological Seminary in fall 2022.

“Our goal is for students to be able to take this wherever they are — in health care, art galleries, clothing stores, almost anywhere,” added Cody Zuiderveen, a GVSU campus pastor in downtown Grand Rapids who is in charge of getting the microchurch initiative off the ground.

Rubin already, who has the idea of beginning a microchurch on his mind, learned of this movement by working closely over the past year or so with Zuiderveen, who has talked with him at length about this hands-on, worship-where-you-find-yourself movement.

“We talked about this quite a bit, especially during the pandemic, in which we had to find new and creative ways to connect with students,” said Rubin.

Zuiderveen said the plan is to work with campus ministry interns, such as Rubin, and to involve them in modules that will help to train them in the model of the microchurch. As part of this effort, the goal is to connect with Calvin Seminary as well as to link an intern with a local church. Students in their third year of school are the ones most likely to have the chance to become interns in the new program.

“We don’t see these students going into a full-fledged ministry right away,” he said. “But we’ll wait to see what comes out of this first cohort of interns. There are things we won’t know until we send out our first graduating group and see how they do.”

Aaron Einfeld, director of admissions at Calvin Theological Seminary, said the seminary sees itself — once all of the particulars of the partnership are worked out — as coming alongside GVSU students.

“We will be looking at how we can provide training while at the same time learning from the students,” he said.

Amy Schenkel, Resonate Global Mission’s Great Lakes missional leader, said microchurches are a new model of church planting that Resonate is exploring. The model has been used for some time in Europe, where, she said, “the church was finding ways to address a post-Christian culture long before North America had to come to terms with an increasingly post-Christian culture.”

The CRC’s Council of delegates has approved microchurches and microchurch networks as a model of church planting.“Right now,” said Schenkel, “they are so experimental in the CRC that I almost feel like it is better for them to develop organically, somewhat under the radar, before they are ready to be evaluated or seen as models for how these churches work.”

In terms of the microchurch experiment with GVSU, she said, “I'm excited that we're exploring ways that the well-equipped student ministry leaders at the campus ministry can be prepared to serve the church post-graduation.

“The ability to gather a faith community for worship, discipleship, and service once they are putting down roots in a new community or vocation will continue to nurture their faith and be an avenue for God's kingdom to expand here on earth.”