Inspired by God, "Go Out and Love!" 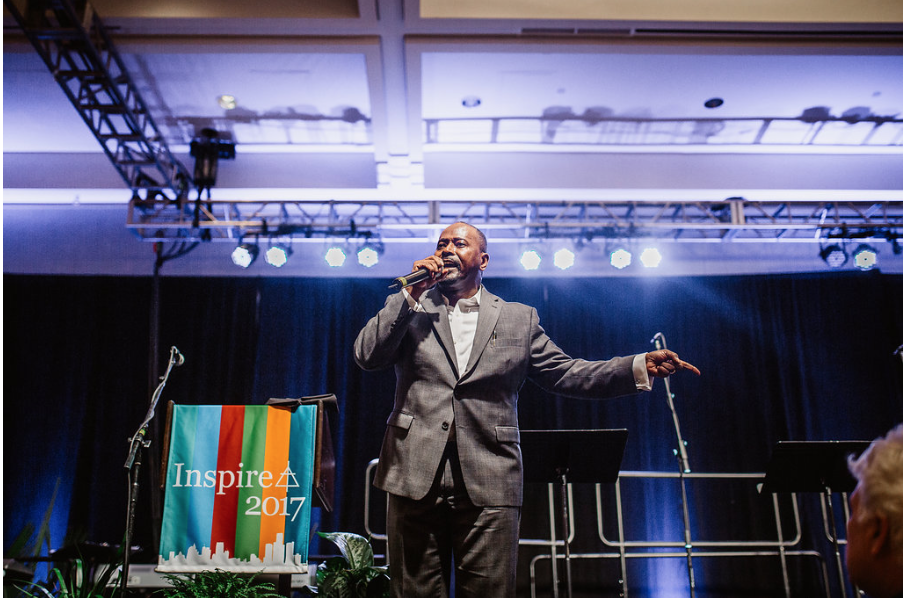 Harvey Carey shared his story with passionate words at Inspire 2017

Harvey Carey stirred the crowd at Inspire 2017 on Friday evening, Aug. 4, with passionate words that offered more preaching than presentation, telling listeners that gathering as they did for seminars and speeches and worship was a valuable thing.

But the inner-city Detroit pastor encouraged people not to waste time when they returned home to ponder too long on all of the wonderful experiences they had and the lessons they learned during the event.

“There is a holy moment happening here with powerful music and great fellowship,” said Carey, pastor of Citadel of Faith Covenant Church.

“I wonder if God, who is in this room, in this gathering, could use this moment, could use you in this movement of people, in this hour in our nations’ history . . . to go from here and be his body. He emboldens us to be his representatives in the world.”

The Friday-night session opened with a short video featuring a range of local Detroit leaders talking about the Detroit riot that erupted in the early-morning hours of Sunday, July 23, 1967, after police raided an after-hours bar. During the next five days, stores were burned and looted, 43 people were killed, more than 1,800 people were injured, and nearly 7,300 people were arrested.

After the riot, the city of Detroit continued to spiral down, but in recent years, with the help of many people, the city has rebounded. Out of the riot came improvements to the city, including construction of the Renaissance Center at which Inspire 2017 took place.

During this summer, which marks the 50th anniversary of the uprising, Carey said, we have a time to reflect on the trauma caused by the riot and yet also consider the hope that can be born out of difficulties.

“We have seen our city ravaged with so much conflict — this is a symbol of our nation and our world,” he said. “Tonight let’s let the Holy Spirit anoint our eyes,” helping us to realize that “God turns tragedy into triumph.”

Yet, he added, this triumph can be hard to see, given the many abandoned homes still sitting along weed-choked streets, the poverty, drug addiction, and crime that continue to beset the city of Detroit. For that matter, he said, look at the horrible wars going on — in Syria, Yemen, and elsewhere. Think about the political strife in the U.S. over such issues as immigration.

“How can I be inspired when so much unbelievable suffering and conflict is going on in the world?” Carey asked. “But we Christians need, with God’s grace, to be different than this world.”

To this he added, however, “Could it be that the church is silent and unwilling to enter the difficult conversations? Why don’t we cry out and march? Why aren’t we doing what we are supposed to be doing [to change the world]?”

Born in Chicago and raised in dire poverty by his single mother, Carey was able to achieve in school and attend college. But it was hard, he said, and he considered suicide. In fact, he was in college and standing on a bridge one night, ready to jump to his death, when he cried to God, “If you are real, save me!”

And God, like a bolt of lightning, flashed into his life, confirming to him that the Lord is real and turning him from jumping onto a pile of rocks below. He continued with school and eventually entered the ministry.

“Today I am free, and this comes from God and from remembering my affliction. Today I’m free to stay in the ghetto and redeem the ghetto God has placed me in,” he said.

His voice rising with emotion, Carey pulled off and flung away his tie and challenged people to remember their own afflictions, their own struggles and pain, to remember their stories and especially how God came to them and is sustaining them as they move ahead in this world filled with so many challenges that only Someone holy can help us face them.

“Be inspired by your own story. Think of God’s grace that makes you who you are — and that should be inspiring,” he said.

With God, the eternal Creator whom far too many people ignore or know nothing about, said Carey, we can look “at poverty and injustice, and, although we become downcast, we can bless God.”

Even as we see so much that doesn’t seem right, even when we consider the conflicts both we and our communities face, we can “give our soul to God,” said Carey. “I can choose to call to mind God, and therefore I have hope.”

Inspired by God, people attending Inspire 2017, some 840 strong, Carey added, can return to their normal worlds and do so with the knowledge that God is in control and that God has a great calling for us to answer, in grand and simple ways.

“Because of the Lord’s great love, we are not consumed by what faces us,” he said. “We must know that his compassion never fails — and we are all products of God’s compassion. . . .

“Let’s go out from here and be God’s feet, his hands, his eyes, and his heart. God is calling us to stop over-processing and to be the church. When you go home, don’t be the same. That will be sin. Simply know who you are and who you can be in him [God]. Go out and love!”