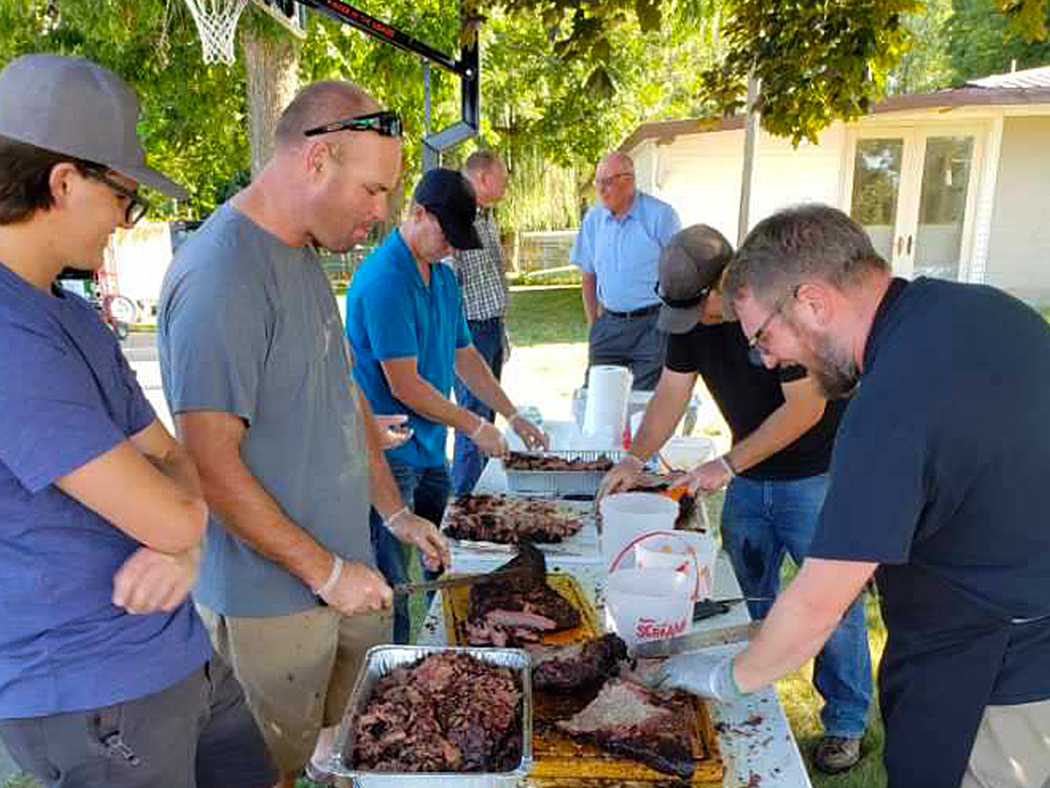 Smoke billowed as the smell of pork and beef filled the parking lot of First CRC in Oskaloosa, Iowa, last Sunday as part of a prayer and praise celebration marking the start of fall programs at the church.

Flipping and grilling the meat was Jonathan Spronk, the church’s pastor. Besides being an M.Div. graduate of Calvin Theological Seminary, he is a trained specialist in grades and types of meat, especially those that can be smoked and grilled. He learned the technology of selecting and cooking meat when he earned a master’s degree in meat science from South Dakota State University.

So as a pastor, he said, he likes to spread hospitality to people by providing delicious meals.

Comfortable making the best of different cuts of meat, Spronk explained that he had a background in meat from growing up in Edgerton, Minn.

“I am part of 13 generations of animal farmers,” he said in an interview before the evening service and dinner that followed. “There is a long family tradition of working with cattle and hogs. My dad was a cattle buyer for a packing house. He went out to farms and feedlots to evaluate the animals and to make offers for them.”

Along with providing meals for church members and visitors with the help of his wife and four children, Spronk loves talking to and teaching people about meat.

For instance, he puts on seminars for people interested in learning about types of meat to grill, using a smoker, using a thermometer to check the temperature of the meat being cooked, and tips on buying the best cuts of meat — and whether they should be placed in a slow cooker or on a grill.

His seminars usually are attended by friends, members of his church, and occasionally neighbors interested in grilling. But sometimes they draw unexpected students.

For example, Dave Den Haan, a ministry consultant for the CRC’s Pastor Church Resources, was visiting his wife’s parents in Oskaloosa recently when his in-laws told him of a Spronk seminar. Hoping to learn more about selecting, preparing, and cooking meat, Den Haan signed up and attended the three-hour event, which was held at First CRC.

“Jonathan led us into the world of beef, pork, and lamb, describing particular cuts of meat, how to buy them, and how best to prepare them,” Den Haan said. “He even provided samples — asking us to rate them on a 1-8 scale for tenderness.”

Since Den Haan uses a meat smoker at home, he said, “It was great to learn ways to put my smoker to new and better use. Jonathan tells great meat stories, and he even gave us a ‘10 Commandments of Grilling’!”

Among other things, those commandments say: “Thou shalt not use lighter fluid;” “Thou shalt know when to use high heat and when to use low heat;” and “Thou shouldst keep the lid on as much as possible.” These are adapted from the book Real Grilling by Jamie Purviance.

“It has been a joy doing these things. People love learning about it,” said Spronk.

While serving as an evangelist for the Lord, Spronk also spreads the message of paying attention to the meat you eat and how to cook it.

“Knowledge of meat and butchering is disappearing,” he said. “Butcher shops keep dwindling. Now people go to the big stores to buy their meat.”

Similarly, people don’t really know where their meat is coming from. They don’t know what it looks like to butcher an animal.

“It is not a pretty thing to see, but there is an art to it,” said Spronk.

When he was at South Dakota State University, Spronk explained, he was a member and later became a coach of the school’s meat-judging team that traveled across the U.S. to compete against other schools.

“It’s a niche thing that large universities do,” he said. “In 2005 we came in second place to the University of Illinois. We were the smallest school that had a team and competed against much bigger schools for a national championship.”

After he graduated, he said, he could have gotten a job grading and inspecting meat for the U.S. agriculture department, or he could have gone on to earn a Ph.D. in animal research.

But by then he was worshiping at a CRC congregation near his home at the time in Brookings, S.D.

“I found that I loved it,” he said. “I got involved in ministry and decided to go to seminary. Fifteen years later here I am.”

Spronk offers the meat seminar occasionally, and he gets plenty of requests to take it on the road. Preferring to keep it low-key and manageable, he said, for the time being at least, he offers the seminar mainly at the church.

“I’ve had a ball doing this,” he said — and jokingly added, “I’m thinking the next addition to our church ought to be a walk-in meat locker.”