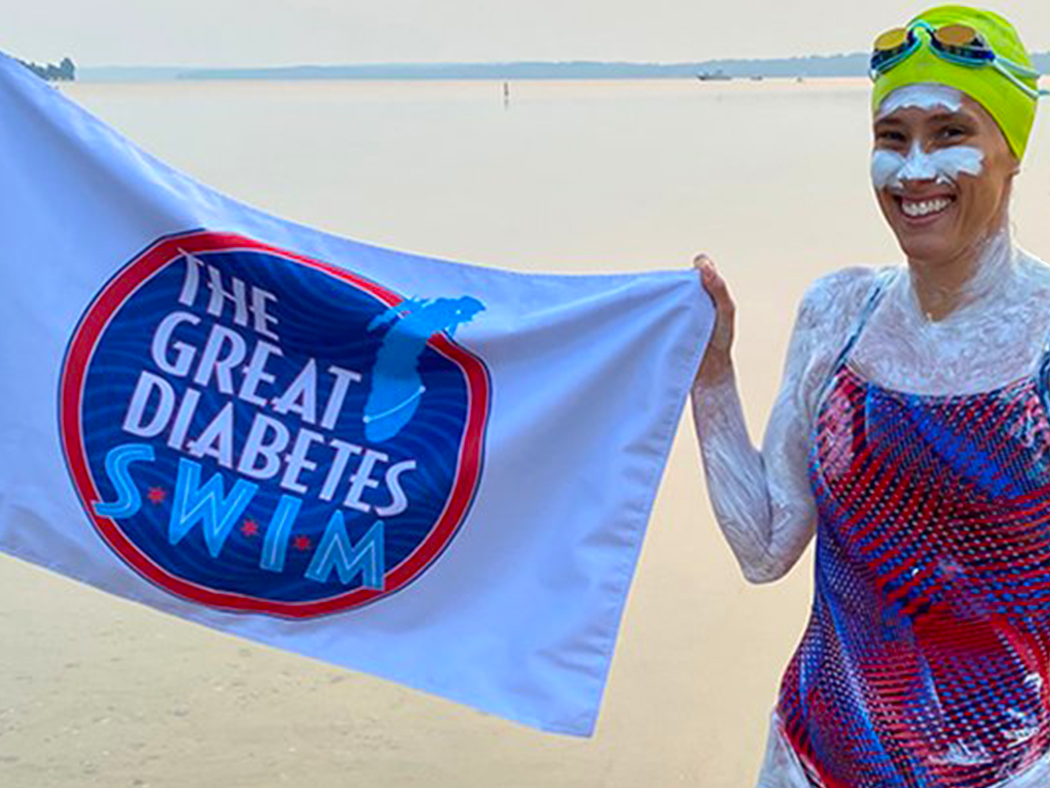 For most people the prospect of swimming across even a small inland lake is intimidating.

But for Marian Cardwell, it’s necessary.

“My uncle was diagnosed with type 1 diabetes in 1955 and observing his perseverance and zest for life while living with the disease was continually inspiring,” said Marian Cardwell. “My uncle was a great supporter of the Chicago Diabetes Project, and after his passing I have tried to continue to raise support to further their great cause of finding a cure to type 1 diabetes.”

Over the years, Cardwell’s uncle “Wally” has inspired her to take on mountains. Well, more accurately, seas. His perseverance has spurred on hers.

The 2011 graduate of Calvin (biochemistry, French double major) who competed in the longest distance race offered at the university, the 1650-meter (which spans about one mile), has since moved into the open water. In 2012, Cardwell, while spending a year as an English Teaching Assistant in Lille, France, trained for and then completed a 12-hour consecutive swim to raise awareness for diabetes research. The “pool” she would swim across: The English Channel.

Fast forward nearly a decade, and Cardwell is still using her gift and grit to catch people’s attention and raise money in honor of her now late uncle.

The plan was to swim across a portion of Lake Michigan. But, when logistics for that swim seemed to fall apart, Cardwell refused to give up—a lesson she learned from her uncle. Then, another door opened.

“One of her friends has a house up here (near Traverse City), and asked how about we do Torch Lake?,” said Matt Cardwell, Marian’s older brother.

So, Cardwell and her crew pivoted quickly and at 7:14 a.m. on Wednesday, August 4, 2021, Cardwell entered Torch Lake in northern Michigan with the ambitious goal of swimming the length of the lake six times.

While a pool length at Calvin was 25 meters (0.016 miles) and came with a chance to push off after each length, a length in Torch Lake is 17.8 miles and estimated to take 10 hours one-way with no pushing off. For context, think about swimming the length of a 25-meter pool 1,112.5 times without being able to hold onto anything. And that’s just one “length.”

“I was getting tired just thinking about being on the boat for overnight shifts,” said Matt Cardwell, who took turns with other crew members, including Marian’s husband Greg riding in a boat alongside Marian. “This would be pretty momentous in the open-water swimming community,” said Matt Cardwell. If completed, it would be the record for the longest continuous open-water swim ever.

Driven by Her Faith

Cardwell completed the first length of Torch Lake in about 8 ½ hours, almost 90 minutes ahead of schedule. She then made the “turn” and headed back south, swimming through the night and completing the second 17.8 miles by 2 a.m. Thursday morning.

“Any mega-endurance athlete, you hear about them going into the zone, putting their mind into another place,” said Matt Cardwell of his sister’s drive, “and she definitely has that mental fortitude to do that.”

But, Cardwell made it clear it’s cemented in her deep-rooted faith.

“It’s that grounding in her faith that makes her as selfless to go and do something like this, both that aspect of selflessness and the ability to find strength and power to do some really extreme things.”

A Marathon, Not a Sprint

After successfully traveling the length of the lake two times, covering 35.6 miles in an 18-plus hour continuous swim, Cardwell ended her swim due to safety concerns from her support crew.

While Cardwell wasn’t able to meet her ambitious distance swimming goal, she did meet the more important goal—continue to raise awareness and funding for diabetes research.

“It’s tough, knowing that I had trained for so much more, but with marathon swimming you’re often on a razor’s edge,” said Marian Cardwell, reflecting on the collective decision with her crew to cut the effort short of the original 106-mile goal. “As I continue to learn from the amazing type 1 [diabetes] community over the last years, I know that no amount of planning or preparation means perfection. This disease is often unpredictable, and I will continue fighting on behalf of this community.”

Even after ending the “official” swim early, Cardwell didn’t quit what she came to northern Michigan to do. In fact, she returned to the water later on Thursday and swam a five-mile stretch of Torch Lake to continue to raise awareness, finishing her swim past a crowd of supporters near Dockside restaurant in Bellaire, Michigan.

“We’re hoping that the energy people see she has for this cause will get them passionate about what she’s doing and they’ll want to support the great work the Chicago Diabetes Project is doing.”