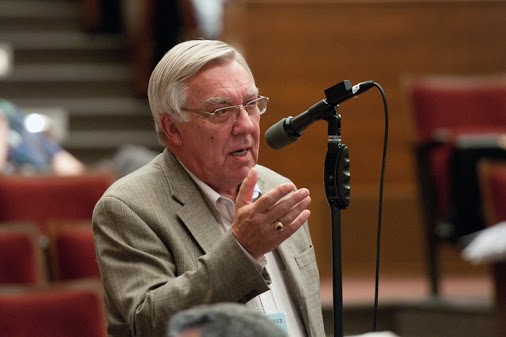 Serving in many capacities in the CRCNA, from being the pastor of a church in Salt Lake City, Utah, to becoming the denomination’s first executive director, Borgdorff devoted much of his ministry to trying to break down barriers that separate God’s people from one another.

Steve Timmermans, current executive director of the CRCNA, said Borgdorff served the denomination and broader church with courage and conviction. In much of what he did, said Timmermans, it was Borgdorff’s hope for the future, reflected in the resurrection of Christ, that drove him.

“Peter served faithfully in CRC leadership, always holding before us the needs of the world, the task of the church, and the gifts with which the denomination has been blessed — with both balance and boldness," said Timmermans.

A leader who helped to form the World Communion of Reformed Churches in 2010, Borgdorff understood his calling to serve as a pastor and administrator in whatever ways he could to help the world reflect the reality of what God wants for it.

“In my heart and calling I believe what binds us together as followers of Jesus Christ is commitment to the Reformed faith, which is much greater than anything that divides us,” Borgdorff said in an interview with a South African journalist in 2011.

In a devotional reading he wrote for Today, he further explained this core value in his ministry.

“The unity that the church seeks is found not in the church’s outward behaviors. It’s found in the biblical reality that reflects God’s desire for the church in the world: ‘There is one body and one Spirit, just as you were called to one hope when you were called; one Lord, one faith, one baptism; one God and Father of all’ (Ephesians 4:4-6).

“The unity we seek is not to be of our own making, no matter how hard we seek it. The unity of the church globally and for all ages is rooted in the fact that together all Christians form one body and confess the same Lord.”

One friend said Borgdorff was the type of church executive who respected everyone. He stopped to greet and learn the names of  staff at all levels during high-profile functions. At the same time, he could be tough and forceful, especially in church meetings, defending those who needed defending and rebuking those who needed to be rebuked.

He was an able administrator who was aware of challenges facing the church. He did his best to help the CRCNA face those challenges, often in tumultuous times, say friends and family.

Borgdorff was a man of strong faith and, when asked, willing to accept a task to serve the church “even when it took a toll on him” — and “emotionally at least, it frequently did,” said Rev. Joel Boot, who asked Borgdorff to serve as the CRCNA’s deputy executive director when he, Boot, unexpectedly was named interim executive director.

“Peter was a man of God and a servant of the church. . . . His philosophy, his faith, was ‘I can do all things through him who gives me strength.’ To the very end, which Peter in his faith believed was just the beginning, he lived with that conviction,” said Boot.

In his passing, the CRCNA and churches across the world have lost “a giant,” said Rev. Wesley Granberg-Michaelson, general secretary emeritus of the Reformed Church in America.

The two were good friends and worked together often to support and push forward the cause of unity in the church.

“Peter was a global church statesman, representing the best of the Reformed tradition, and always seeking new bridges for unity and mission in the body of Christ,” he said.

As a church leader of humility and integrity, Granberg-Michaelson said, Borgdorff’s commitment to unity started close to home by advocating “for healing the wounds and building a closer relationship between the Christian Reformed Church and the Reformed Church in America.”

Both he and Borgdorff would meet regularly for breakfast to sort through issues dividing the churches in the lead-up to the joint meeting of the CRC synod and the RCA’s general synod on the campus of Central College in Pella, Iowa, in June 2014.

At that meeting, the church passed a joint resolution, affectionately called the “Pella Accord,” in which the churches pledged to work together in ministry whenever and wherever possible.

That accord has helped to build the framework and connections that will lead to another joint meeting of the denominational synods this coming June at Calvin College in Grand Rapids.

“The promising possibilities that will be explored when our two synods meet together in early June would have been impossible without Peter’s pioneering work begun years ago,” said Granberg-Michaelson.

Borgdorff was president of the Reformed Ecumenical Synod when it merged in 2010 with the World Alliance of Reformed Churches in a week-long meeting at Calvin College.

“Peter worked tirelessly for unity and shared mission in the worldwide Reformed family, and beyond. . . . Few know how indispensable Peter was in the process which then gave birth to the new, unified World Communion of Reformed Churches,” said Granberg-Michaelson.

Borgdorff served on many boards, including that of the social justice ministry Sojourners, in Washington, D.C.

“He and I served together supporting the ministry of Sojourners for years,” said Granberg-Michaelson. “Peter loved this engagement, never tiring of his desire to express a courageous witness expressing God’s love for the poor and marginalized, and the gospel’s imperative for racial healing and reconciliation.”

In late March of this year, Borgdorff joined other evangelical leaders in signing a letter asking fellow evangelicals in the U.S. to become part of a movement titled “Reclaiming Jesus: A Confession of Faith in a Time of Crisis.”

This letter starts out: “We are living through perilous and polarizing times as a nation, with a dangerous crisis of moral and political leadership at the highest levels of our government and in our churches. We believe the soul of the nation and the integrity of faith are now at stake.

“It is time to be followers of Jesus before anything else—nationality, political party, race, ethnicity, gender, geography—our identity in Christ precedes every other identity. We pray that our nation will see Jesus’ words in us. ‘By this everyone will know that you are my disciples, if you have love for one another’ (John 13:35).”

Borgdorff was born on Nov. 14, 1939, to Leonard and Arina Borgdorff in Overschie, the Netherlands, the third of their five children. The family immigrated to Hamilton, Ont., where Borgdorff lived until moving to Grand Rapids to attend Calvin Seminary.

In 1963, Borgdorff married Janet (Kuperus). He worked for a time as a tool and die maker, and he served churches in Salt Lake City and in Holland, Mich., after graduating from Calvin Seminary.

He began his administrative and leadership work in the area of missions with the CRCNA.

Trish Borgdorff, one of Peter and Janet’s daughters, recently posted a blog in which she described the past several weeks after her father was diagnosed with cancer.

“In the days when my dad went from the ER to the neuro unit to Mary Free Bed [a rehabilitation facility], we couldn’t help wondering what life would hold now, in this new space,” she wrote.

Thinking about significant changes and how they fit into the family story, Trish noted the importance of remembering things about her parents.

“These two people were both born in the Netherlands and immigrated with their families of origin, my dad to Canada and my mom to New Jersey.

“They met as young adults, married, and pursued ministry, and in a short time, there were four kids in tow and then a fifth. My mom launched a very successful career in her mid 40s, and they are now Papa and Beppe to 16 grandchildren and have a great-grandchild arriving in September.

“They have buried their oldest son. They are no strangers to navigating change. Thank you, Dad and Mom. . . .”

In an article published in the January 2011 issue of The Banner, Borgdorff wrote about what it means to be a healthy church, how unity plays into that, and what he has seen in his years seeking to be a part of that process:

“During my years of service I have sometimes seen our denominational church family live as God intended. At other times, we have appeared too fractured. To have a future as a ‘healthy church,’ we need to be more of the former and less of the latter. We need to be clear about our identity and the rich heritage that has shaped us; we need to be discerning about what God intends us to be; and we need to live interdependently.”