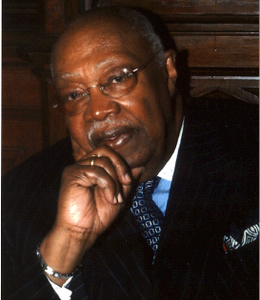 Rev. Eugene S. Callender, who was the first black pastor in the Christian Reformed Church, died Nov. 2 in Manhattan. He was 87.

He was recruited in the late 1940s by The Back to God Hour to plant a church in Harlem. The first black graduate of Westminster Theological Seminary, he started out in a storefront, but no one came for services.

So he started holding outdoor worship services, going from street to street. Eventually he attracted worshippers and opened a five-story worship center.

An article in the book, Learning to Count to One: The Joy and Pain of Becoming a Multiracial Church, says that Callender’s ministry grew in Harlem.

“Over time God honored Callender’s boldness with many African-Americans coming to faith in Jesus Christ, and many CRC leaders and members supporting the ministry.

“Callender worked hard and prayed hard to present a relevant Reformed faith that fit the challenging social and cultural conditions of African Americans in Harlem.”

During his 10 years with the CRC, he developed a community ministry alongside people such as Malcolm X and Alex Haley (he officiated at the funeral service for Billie Holiday), while maintaining cross-cultural ministry, says a 2011 story in The Banner.

After leaving the CRC in 1958, Callender joined the Presbyterian Church.

He went on to earn master’s degrees in business and law from Columbia University, and he became an advisor on race matters for five U.S. presidents.