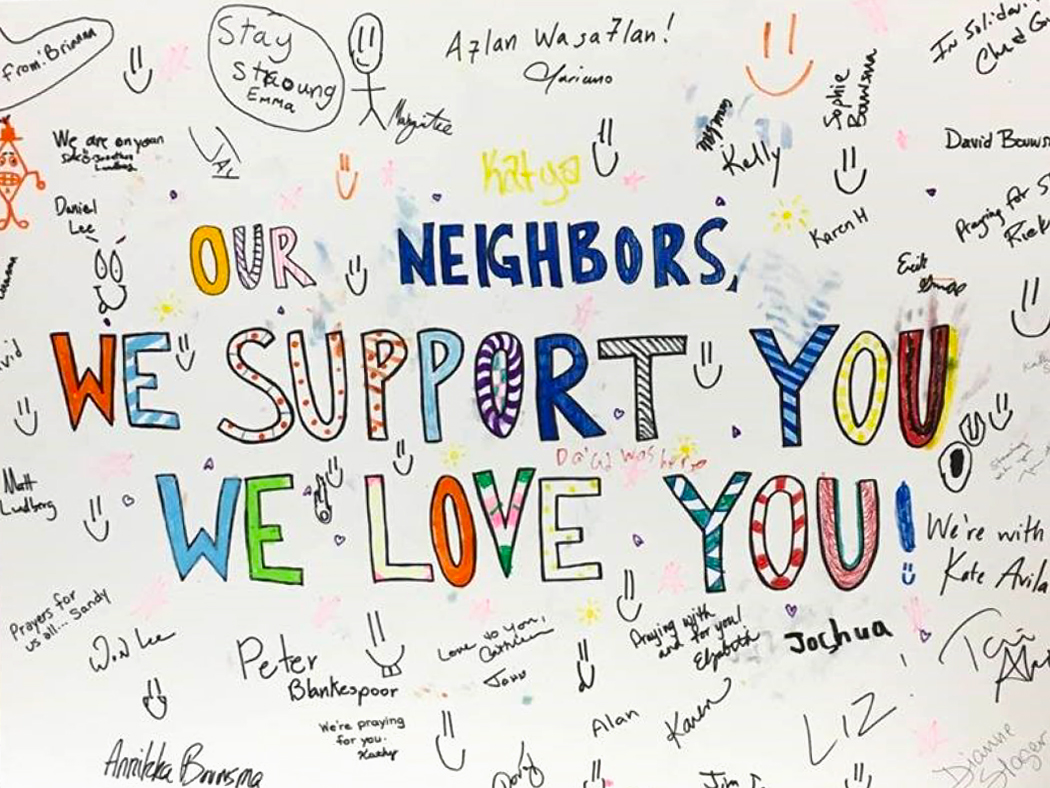 After the U.S. government in early 2017 blocked travel from many Muslim nations to the U.S., members of Boston Square Christian Reformed Church wondered what they could do to show solidarity with Muslims at the mosque located less than a mile from their church.

Having already participated in a months-long presentation at their church describing the basics of Islamic faith, some of the folks at Boston Square decided to do something practical to let the Islamic Center of Grand Rapids know it wasn’t alone as news headlines kept reporting on what was called the “Muslim Ban,” said Jay Blankespoor, who serves as a copastor at Boston Square along with his wife, Elizabeth Vander Haagen.

Blankespoor is a member of a newly formed implementation team with the goal of helping to link more CRC congregations to their Muslim neighbors. Working with a 10-year-old program called Shoulder to Shoulder, the team wants to gear up efforts across North America to encourage congregations to befriend Muslims in their midst — just as Boston Square did in early 2017.

“With all of the anti-Muslim rhetoric going on at that time, we wanted to do something without being too political,” said Blankespoor.

A church member suggested creating two posters — one for members of the mosque, as well one as for Latinos who were also under siege at the time, with a simple message that said, “We love you.”

“We put the posters in the back of the church sanctuary inviting anyone to sign them if they wanted to — and many people did,” said Blankespoor.

Mariano Avila, professor of New Testament at Calvin Theological Seminary and a member of Boston Square, took copies of the one poster to hand out to his students who were pastors of Hispanic churches in West Michigan. Meanwhile, Boston Square members, including Blankespoor, took the other poster to the Islamic Center on a Friday prior to the mosque’s weekly gathering for prayer.

“They welcomed us graciously,” said the pastor. “The imam took us into his office and explained what would be happening during Friday prayer and then invited us to attend during the prayer.”

Since then, Boston Square and the mosque have slowly built a connection, sharing meals and information about their different faith traditions. Basically, said Blankespoor, they have begun to stand “shoulder to shoulder” with the mosque, deciding to focus on friendship rather than evangelism for the time being.

“We have been able to step out of our comfort zone. We’d very much like to see them become Christians, but we want to build bridges toward peace and be able to see each other as human beings and children of God first,” he said.

It was a hot day in August 2010 when Richard Killmer, then executive director of the National Religious Campaign against Torture, walked into the Washington, D.C., office of his friend, Mohamed Elsanousi, who worked at that time for the Washington office of the Islamic Society of North America.

Both of them were deeply troubled about two incidents of anti-Muslim bigotry that were gripping the country, said Killmer, who later went on to work with the CRC’s Office of Social Justice in several capacities.

“A Muslim congregation was trying to build an Islamic Center across the street from Ground Zero in New York City. There was a huge outcry against it. At the same time, a pastor in Florida was threatening to burn the Qur’an, which he eventually did,” said Killmer.

Elsanousi, who is now executive director of the Network for Religious and Traditional Peacemakers, recalled that he and Killmer talked and batted around ideas, wondering  what they could do “to provide a moral voice to what was going on.”

They soon decided to go big and convene the heads of denominations to come to the National Press Club in Washington, D.C., for a press conference and to sign a statement pledging cooperation on fighting anti-Muslim bias. To their surprise and pleasure, 40 denominational leaders from across the U.S. participated and signed the statement.

“There were 38 TV cameras at the press conference,” said Killmer. “Participating were Protestants, Catholics, Jews, and key leaders of the Muslim community. . . . There were many reporters from the international press, so the event was broadcast throughout the Muslim world. The strong presence of the U.S. Conference of Catholic Bishops was very helpful.”

After the event, Elsanousi and Killmer worked with Jewish and Christian leaders to come together to form “Shoulder to Shoulder: Standing with American Muslims, Advancing American Ideals.” They hired staff, organized an office, raised funds, formed an executive committee and a steering committee, and began to work.

“We were successful in creating this organization, which is now active across the U.S.,” said Killmer.

Elsanousi added: “We have also been able to foster connections between anti-Muslim sentiment and persecution of Christians in the Middle East. Our work helps us to hold American values and to talk with the broader Muslim world and protect minorities in the Muslim world.”

In 2014 the CRCNA, through its Office of Social Justice, became a member of Shoulder to Shoulder. Killmer represents the CRC on the organization’s executive and steering committees.

Shoulder to Shoulder is currently creating an implementation team within the CRC and the Reformed Church in America, said Killmer, “to encourage the national office and congregations to engage in this work, including bringing a training conference — in 2021 — to Grand Rapids, Mich., called ‘Faith Over Fear.’”

“I have seen the CRC grow in its efforts to prioritize this issue as part of its emphasis on racial and immigration equity and its broader emphasis on inclusion and interreligious issues,” said Orsborn. “I am encouraged to see the CRC decide to put more energy in working on this with its new, robust implementation team.”

Laura Osborne, coordinator of interreligious relations for the RCA, also serves as a member of the implementation team and looks forward to connecting more congregations with Muslims in their communities.

“Shoulder to Shoulder works out of Washington, D.C.,” she said, “but it also has a very boots-on-the ground approach to make our communities and our country more welcoming to Muslims.”

Jeff Bos, assistant director of programming at the Al Amana Centre in Oman, is also a member of the implementation team. On a recent morning at 5 a.m., he spoke over Zoom about the value of the Al Amana Centre and the work it is doing in fostering relationships between Christians and Muslims.

For one thing, he said, the centre has hosted many people — including Pastor Jay Blankespoor from Boston Square CRC — who went there to learn more about the tensions and similarities between various faiths, particularly Islam and Christianity.

“We try to expose pastors to the varieties of Islam and to develop a Reformed approach to relating and engaging with others,” said Bos, a former CRC missionary in Bangladesh.

The work of Al Amana Centre is based on 125 years of collaboration between Christians and Muslims in the Sultanate of Oman. The Reformed Church in America began collaborating with the people in Oman in 1892. In schools and hospitals, they worked together with Omanis to educate and meet their health needs. Today the RCA is part of this ministry shared by a number of groups.

“What happens to the participants who come here is that many of them go home with new eyesight. They are able to see our commonalities and differences and connect locally with Muslims,” said Bos. “Friendship with others who are different from us is the overall issue.”

As with Boston Square, Bos said, it is a matter of “getting to know and to support your neighbors in this day and age.”

Emma Van Drie serves as an outreach and engagement volunteer for Al Amana Centre and Shoulder to Shoulder. She reaches out to faith and community leaders in northwestern Iowa to build a network of partners committed to learning and countering anti-Muslim bigotry in their spheres.

“One of the ways I hope to do this is by promoting and helping to organize Shoulder to Shoulder's ‘Faith Over Fear’ trainings in the community and by working to adapt this training for a college audience as well,” she said.

“I think it is important for people to recognize the reality of Islamophobia in America and to have the confidence to speak out against bigotry when they come across it.”

Blankespoor recalled that the mosque and Boston Square CRC planned to get together for pizza and to talk as a way to further their relationship on a Sunday just before Easter in 2019.

Given that it is a short distance, they decided to walk to the mosque after church. But they ran into a little problem with the weather.

“We ended up with 50 people signing up, and we walked over to the mosque in pouring rain. Until then, the weather had been fine. So we didn’t have umbrellas, and we arrived sopping wet, but they were incredibly kind and welcoming.”

As they dried out, he said, everyone ate pizza and talked and had a good time.

Then on Easter came a big surprise for church member Elizabeth Triezenberg when she walked into Boston Square CRC and saw a colorful array of flowers arranged in the front of the church. Some of the most beautiful flowers were a gift from the Islamic Center of Grand Rapids — perhaps as a way to say “thank you” for coming over for pizza.

“Those flowers completely blew me away. That kindness really got to us,” said Triezenberg, who has been active and interested in building relations with the mosque since 2017.

But the banks of flowers weren’t all. As the service began, Triezenberg heard a soft murmuring and looked toward the back of the church to see members of the nearby mosque standing in the last two rows to worship with them. This was a form of solidarity that she didn’t expect but deeply appreciated.

“There were maybe a half-dozen people from the mosque back there. What an amazing thing. It really did move me,” said Triezenberg.

Sharif Shahibzadal, imam of the mosque, said he is very grateful for all of the interaction they have had with Boston Square. He is sad that the COVID-19 pandemic has hindered opportunities for ongoing relationship between the mosque and Boston Square.

Nonetheless, he said, he is very hopeful their friendship can grow. And he suspects that it will — because people at the church have reached out, stretched themselves and have even braved a downpour to build bridges to be with them.