Denise Posie, a Mentor to Many, to Retire 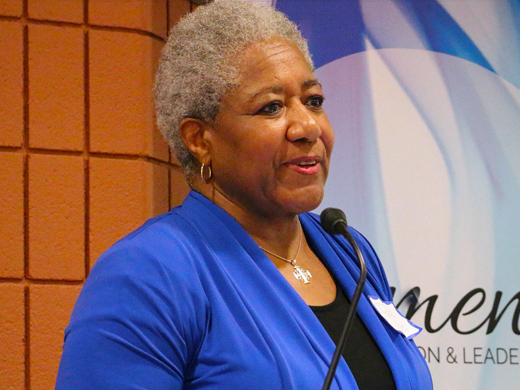 Denise Posie is eagerly waiting to see the directions into which the Lord will lead her once she retires later this month as director of Leadership Diversity for the Christian Reformed Church in North America.

From her early days of growing up in Detroit to working for such companies as IBM and from attending seminary at Columbia (S.C.) International University to becoming a minister in the CRC, said Posie, God has continued to bring her to places and into positions that have continued to surprise her.

“When I went to seminary in South Carolina, I had no idea where God would send me once I finished,” she said.

She added that she certainly had no plans to return to Michigan or, especially, to become a pastor in the Christian Reformed Church — a denomination she knew next to nothing about — upon graduation.

“Jesus has always kept surprising me,” said Posie. Besides landing in West Michigan to pastor a church in a denomination with Dutch roots, Posie added, “I was surprised that I would eventually end up being in this position (of leadership diversity development) and to see it grow.”

As she retires, said Posie, she is looking forward to having opportunities to preach in the Spirit-led, somewhat extemporaneous style of her Baptist and Pentecostal upbringing — and to give regular altar calls, inviting people forward for prayer.

That doesn’t necessarily mean that being a pastor of a church is in the offing, but she knows that Christ is the one who leads her in the directions in which God wants her to go.

“I love to celebrate what God is doing in my life,” said Posie. Looking ahead to retirement, she added, “I want to do God’s will, and I am so looking forward to that” — and to see where that goes.

As she reflects on her ministry in the CRC, Posie said she hopes she has been a leader like the biblical character Esther, the queen of Persia whose story is told in the book of Esther and whom Posie featured in her own book, Consider a Greater Purpose: Vashti, Esther, and the Women Who Followed.

In the biblical text, King Ahasuerus (Xerxes) chooses Esther among hundreds of candidates to be queen of Persia. Holding that position, Esther has the opportunity at a crucial point to seek the king’s mercy in saving the Jewish people from the murderous plans of the king’s high official Haman.

Esther petitions the king despite her concerns over how he might react. "This was a woman who showed great courage and obedience. God put her in that place for 'a time such as this,'" said Posie.

Woven through Posie’s book are stories of other powerful women such as Eleanor Roosevelt, Corrie ten Boom, and Rosa Parks, who in their own ways exemplified the courage and strength evident in the book of Esther.

Posie also writes about how God has been active in her life, helping her to see her own greater purpose and how to make a difference in the lives of others.

“We see in reading Esther that God wants to take us out of our comfort zones. We see how important it is to be where God wants us to be,” she said.

Posie finishes the book by imagining herself as Esther speaking to women of today.

"I am the face of many women desiring to be used by Him to make a difference in the world," Posie (as Esther) says. "More women like me are in the Body of Christ."

Posie also says that the "21st century needs women of God who speak truth about the failure of systems and structures that harm and even destroy people."

In her career in the CRC, Posie served for several years as solo pastor of Immanuel CRC in Kalamazoo, Mich., and then worked as a consultant for Pastor Church Resources. In both positions, she served as a guide to other women and learned how to hold hard conversations about sensitive topics.

She likes to think that in her work she has shown the honesty and courage of Esther as she has taught leadership, especially to women in the CRC.

“I am passionate about how I influence and grow leaders by creating space for identifying leadership challenges, sharing experiences, and personal transformation," said Posie.

Over the past four years, she has been a mentor to women and men attending Calvin Theological Seminary . In leading a faith formation group, Posie has sought to encourage men, but especially women to be open to the surprises that God has in store for them. She has supported women, helping them to stand strong like Esther.

In the process, she tells her story — certainly about the unexpected things, the elements of God’s amazing grace — that have shaped her as a pastor. She talks about coming into a denomination that hasn’t always been open to embracing the gifts women bring with them.

She also speaks of the challenges of being a woman of color in pastoring a church on the north side of Kalamazoo. “I have helped the women I mentor learn how to navigate the culture and theology of the CRC,” said Posie. “Even though I never had a woman formally advocate for me, I have been blessed by having those who have been there when I needed it.”

Women for whom Posie has been a mentor say it has been a privilege getting to know her as she helps them chart the course of their ministry.

Kristy Bootsma met Posie during the joint CRC/Reformed Church in America synod that took place in 2014 on the campus of Central College in Pella, Iowa.

“From the moment I met Denise, I knew she was a mover and a shaker. She exudes passion for the people she is surrounded with,” said Bootsma. “Denise and I kept in touch over the next few years. As I began seminary, I didn’t realize how much I needed female ministry leaders as mentors in my life and learning.”

Describing Posie as a leader with a kind heart and open mind, Bootsma added, “Denise is a mentor who models a life in movement with the Holy Spirit. Denise has a way of encouraging you as a coparticipant in the work God is doing in this world. You know she is investing in your life because of the way God has called her and the gifts God has given her.”

Denise mentors by prioritizing relationships over everything.

“As a single black woman who was ordained in the Baptist church, Denise does not fit the historical norm of a minister in the CRCNA. She has faced opposition, and she has faithfully followed where God has called her.”

Last year, Bootsma served as an intern with Posie in the leadership diversity office.

Lisa DeYoung, who graduated last year from the seminary, said Posie helped her a great deal, given that she was the only woman in the seminary when she enrolled in 2016.

She and others in her formation group met with Posie every Monday morning. Offering a powerful but gentle presence, Posie “has always been consistent in her advocacy for minorities and for women, and she has done so with joy, spiritual depth, and wisdom,” said DeYoung,

“During times when I needed to rebuild trust with church leaders and with my denomination,” said DeYoung, Posie has been her advocate and encourager. “She always had a calming influence on me and others — able to listen and speak truth in the midst of challenging and complex situations.”

DeYoung, who graduated from the seminary with a master’s degree in ministry leadership and pastoral care, now works for the Calvin Prison Initiative.

Besides mentoring young women, and standing on her own experiences as she does this, Posie has also quietly and in a low-key way worked on antiracism efforts in the CRC. When she first came to the CRC as a pastor in Kalamazoo, she had little idea of the challenges a black woman preacher would face.

“I learned that I needed to be slow, patient, and humble. I’m not sure that I understood that at first,” she said. “I began to see that the issue of racism goes deep, and it is about who has the power to create ministries. . . . I learned as a pastor that you have to ask, ‘How do you have integration and not assimilation’?”

As a pastor in Kalamazoo from 1999 to 2012, Posie learned a great deal about this, she said. One of the efforts she became involved in was a project that dealt with police profiling of young black men. She often would stop in her neighborhood when it looked as if a police officer had pulled over a black man to see what was going on.

Among the many surprises in her life, she said, has been how deeply involved she has become in working with women seeking to serve as ministers in the CRC: “I’ve found myself being a person who gives someone else a vision that God could be calling them to this work.”

As for the CRC, Posie added, “it is positioned to be a high-functioning, multiethnic denomination. But we need to make sure that an accountability structure is in place. We need a transparency plan in place so that through prayer and discernment we can be about doing the will of God.”

Posie served as a consultant with Pastor Church Resources, fostering healthy dialogue and engaging with churches and leaders. In the past few years Posie has served as director of Leadership Diversity, and in this role she has been “a catalyst for engaging women leaders and for encouraging leaders of color throughout the denomination,” said Watson.