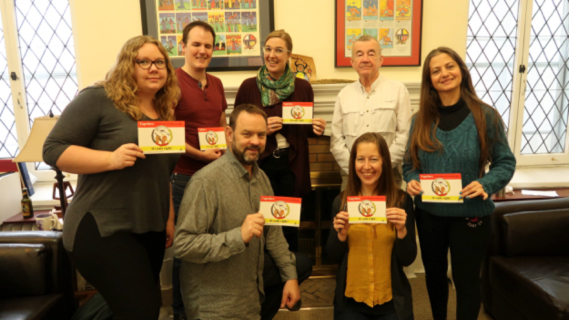 Refugees who are sponsored to come to Canada, either by the government or by churches and other organizations through the Private Sponsorship of Refugees (PSR) program, are expected to pay the federal government back for the travel costs incurred in bringing them here. These travel loans can amount to upwards of $10,000, particularly for large families traveling from remote locations.

Until earlier this year,  the Canadian government required not only that refugees begin to pay off these loans within 30 days of arriving in Canada but also charged refugees interest on the loans.

But, because of the advocacy of Christian groups, that changed and that has helped to ease the burden on refugees.

“Financial pressure is a reality for every single refugee I interact with, particularly in B.C.'s lower mainland, where the cost of living comes as a shock to many newcomers,”says Dena Nicolai, who works as a refugee chaplain for a network of CRC churches in British Columbia’s lower mainland.

Their growing understanding that they will need to factor in loan payments to an already tight budget can be overwhelming, particularly as many of them will need to spend several months learning English before they can jump fully into the job market.”

That’s why Nicolai, who is also a member of the supporting committee of the Christian Reformed Centre for Public Dialogue, was a key contact in the development of an online advocacy opportunity for CRC churches that asked the Canadian federal government to fully waive travel loans for refugees.

John Hiemstra, a professor at The King’s University in Edmonton, Alta., joined more than 300 other people in sending a message to their Members of Parliament through this online action opportunity. He noted that “to demand that refugees—people who are defined as people who are ‘forced to leave their country in order to escape war, persecution, or natural disaster’—repay travel loans at this vulnerable point in their lives is simply a violation of biblical justice.”

Mike Hogeterp, director of the Christian Reformed Centre for Public Dialogue, was one of the developers of the action opportunity. “It really took off. Within a week, 70 people had sent messages to their MPs, and by week two we were up to 235. It was abundantly clear that CRC people felt that refugee travel loans were a problem.”

The Centre for Public Dialogue partnered with World Renew on the action opportunity, along with the Mennonite Central Committee, Citizens for Public Justice, and the United Church of Canada.

Earlier this year the Canadian government responded to this advocacy and that of many other refugee-supporting organizations. The federal government, acknowledging that travel loans burden refugees, has moved to delay the start of loan repayment from 30 days to a year, said Deb Mebude of Citizens for Public Justice, a Christian advocacy organization that was a partner in the effort. “They also removed interest on these loans. For newcomers with thousands of dollars of debt, that really does make a big difference. That is progress. And that is worth celebrating.”

While these changes did not fully eliminate the burden of travel loans, Hogeterp agreed: “Justice so often comes in small steps. The small changes last April grew out of relationships and candid conversations made possible by those relationships. The changes to travel loans reduce hardships and are one of many steps to come toward justice and welcome for refugees.”

When churches sponsor refugees, as many CRC churches have done, these sponsors sometimes end up deciding to pay for all or part of the refugees’ travel loans, on top of costs they have already committed to pay to support refugees for one year after their arrival. While this is compassionate on the part of sponsors, Cameron Klapwyk of World Renew’s Refugee Office wishes that this financial burden on refugees and sponsors would be fully alleviated.

"Refugee sponsors want to direct their fundraising efforts toward the well-being and integration of the newcomers they welcome. But many choose to also cover the cost of the refugee travel loan, knowing the burden that it can place on a family trying to establish themselves in Canada. It is unfortunate that the generosity of sponsors has to be directed toward paying a loan that the Government of Canada should be covering."

This advocacy success filled Nicolai with pride in her denomination. “As newcomers described the financial stress they were feeling, I was grateful to be able to say that the Christian community (and others, of course!) had heard and acknowledged the pressures of travel loans and were advocating to the government on behalf of refugees.

The ad hoc group of organizations is continuing to work together to support refugees and refugee sponsors through advocacy.

If you would like to advocate for the full waiving of refugee travel loans in Canada, you can send a message to your MP here.