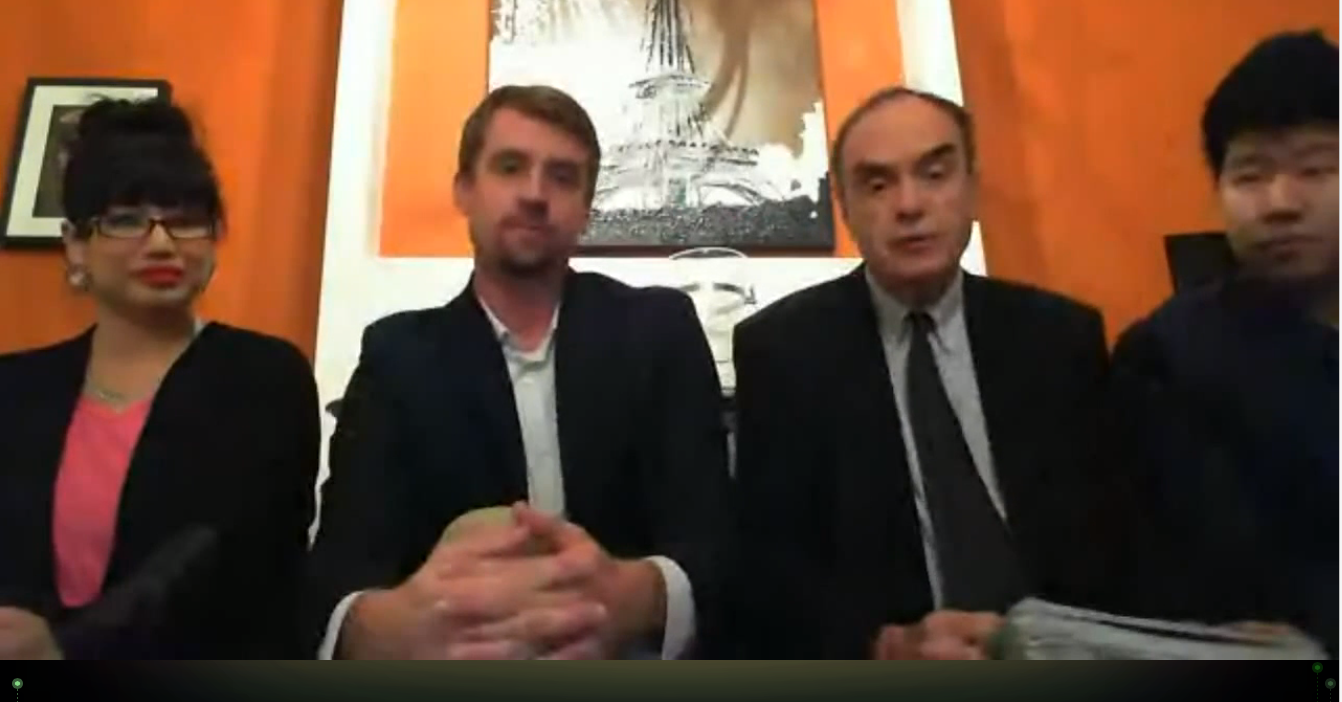 CRC representatives to the COP 21 conference are working to bring a Christian witness to delegates from around the world who are attending the climate talks in Paris, said Kyle Meyaard-Schaap.

As part of their effort, said Meyaard-Schaap, co-coordinator of the CRC’s Climate Witness Project, they are discussing the significance of following God’s call for his people to care for  creation.

“I believe the role of faithfully witnessing to what God has committed us to do is underrated,” he said in a teleconference broadcast on Monday evening.

“God is here and his spirit is moving at COP 21. It is our job to figure out how that is happening and then to tell others about it.”

About 200 people from an estimated 30 CRC congregations across North America watched the teleconference, said Rev. Richard Killmer, who is also co-coordinator of the Climate Witness Project. The teleconference aired at 9 p.m. EST and 3 a.m. in Paris.

Besides Meyaard-Schaap and Killmer, members of the CRC delegation are Michelle Nieviadomy, assistant director of the Edmonton Native Healing Center in Edmonton, Alberta, and Joe Moyhan Oh, a church relations associate for World Renew.

Organized by the Office of Social Justice, the group left more than a week ago and will be staying until the final accord is reached.

In Paris, they have been sending back daily emails to supporters, keeping them informed about progress at the conference. They reported in their most recent email that COP 21 delegates this weekend accepted a 48-page report detailing steps to take to limit climate change worldwide in coming years.

Delegates will discuss the report, which will be the basis of the final Paris Accord, this week and plan to vote on adopting it this Friday.

When CRC delegates return from France, said Killmer, they will work with churches in a network developed to share information about climate change and to lobby lawmakers in Canada and the U.S. to implement what will be contained in the Paris Accord.

“The CRC is learning quite a lot through this process and has been educating itself toward taking action,” said Killmer.

Meanwhile, at COP 21, the CRC delegation is meeting with as many people as possible to represent the Christian Reformed Church “and to talk about its position” on climate change, said Killmer.

The denomination’s stance on climate change was documented in a report to Synod 2012.

Among other things, synod called “upon churches, members, and denominational bodies to be voices for justice and public examples in the effort to live sustainably within our God-given resources, to promote stewardship in our communities and our nations, and to seek justice for the poor and vulnerable among us…”

Killmer said about 80 church representatives from the U.S. and Canada, several coming from Evangelical denominations, have been meeting with delegates to the climate talks. Muslim and Jewish groups are there as well.

“There is truly an interfaith effort of people seeking to save God’s creation for the next generation,” he said.

Nieviadomy said she is among a group of religious representatives who meet daily with the Canadian delegation to the talks.

“We believe it should be the faith community speaking out about care for creation,” said Nieviadomy. “We should be role models.”

Meyaard-Schaap said, in a meeting with U.S. State Department delegates to COP 21, they talked about how people of faith “have the ability to raise the moral aspects of this issue. We can communicate the moral imperative on creation care.”

In other activities, Joe Moyhon Oh said he has spent time in recent days at what is called the Green Zone, a building where people visiting the conference congregate.

He said he met a man from the small Pacific island of Kiribati who came to COP 21 to warn delegates of what climate change has in store. His island is facing rising water levels and inhabitants will have to move to the island of Fiji in 10 years or so.

“He came not to save the future. He felt it was too late for his island. He came to save the lives of people today” by asking delegates to COP 21 to make changes that can impact places where it isn’t too late, said Oh.

Nieviadomy, a Cree Indian, said she has heard many stories about the impact of climate change, especially in Arctic, in her meetings with Canadian delegates. But she has also learned of measures Canada wants to take to address the issue.

One thing she has been especially bothered by, though, is the lack of Indigenous voices — from North America and elsewhere — among those who will be voting on the Paris Accord.

“We need to be heard so people can see how climate change is affecting our people and communities,” she said. “How can we walk forward, especially since there aren’t many Indigenous voices here.”

In the recent email sent to supporters, the delegation highlighted the reasons and values that should drive Christians to be involved in issues such as this.

“It is not in the Christian’s self-interest to love his enemies and pray for those who persecute him, and yet this is precisely what Jesus calls him to do in the face of opposition (Matt. 5:44). The Kingdom of God doesn’t follow the logic of real politik; it follows the logic of the cross.”