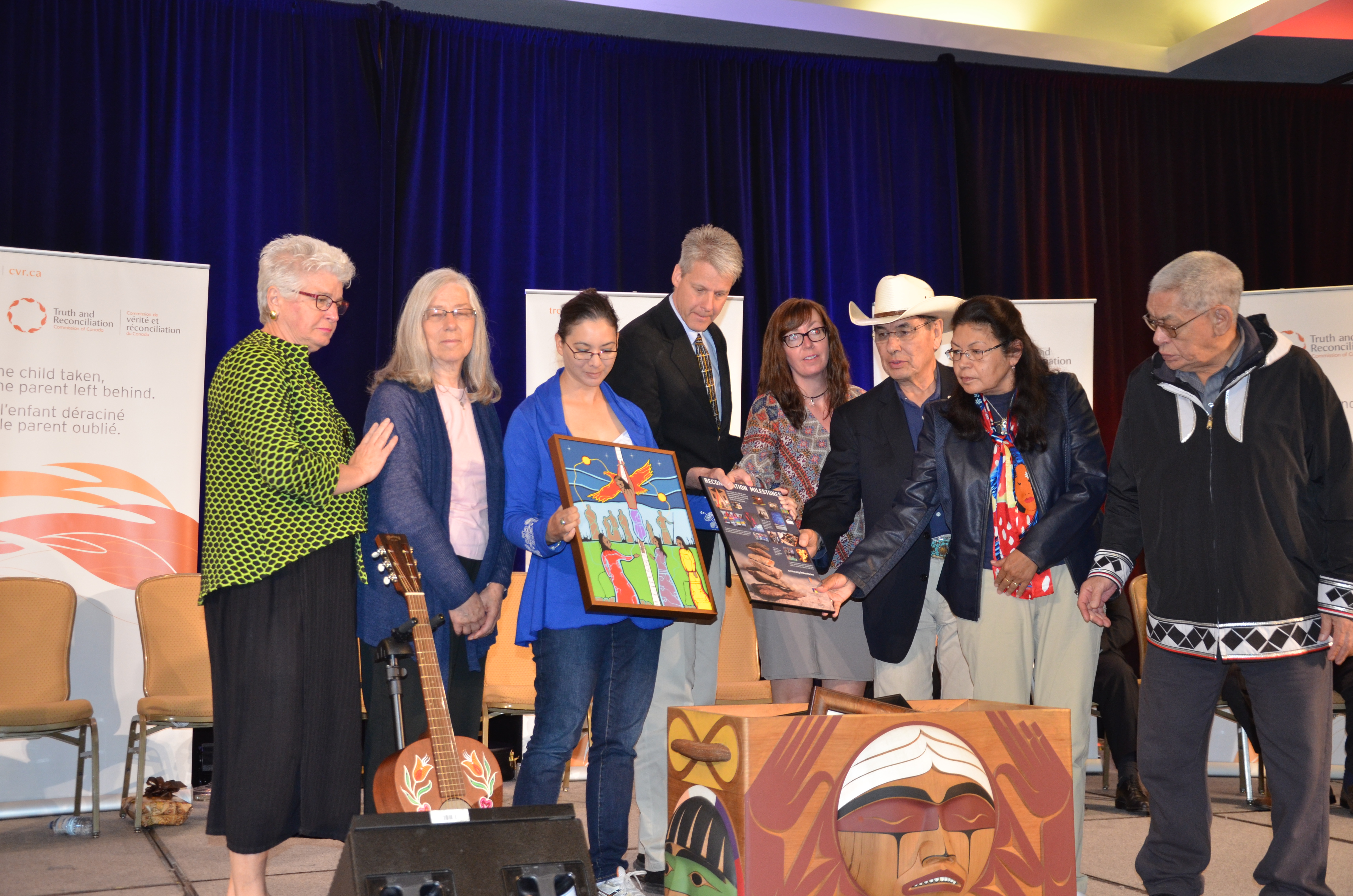 Shannon Perez, Darren Roorda, and Kathy Vandergrift presenting the CRC's gifts to the Commission with the commissioners and honorary witnesses.

On Monday, Canadian Ministries Director Darren Roorda and Board Chair Kathy Vandergrift took the stage at the Truth and Reconciliation Commission of Canada.

In front of a crowd of more than 1000, including survivors of Indian residential schools, other Indigenous people, and witnesses of various ethnicities, they committed to continuing to reconcile with Indigenous peoples, naming concrete steps that the denomination is taking and will take in the future.

In speaking, Roorda and Vandergrift emphasized the hope that the church and its people have in God. “We have been honoured to witness the expressions of truth in the TRC, and in them have seen a sacred momentum of reconciliation and hope. Because of this hope, and with the help of our Indigenous neighbours and Creator God, we are committed to turning from the systemic evils behind colonialism and living into a sacred call of unity and reconciliation.”

They were among those who appeared in Ottawa as part of an event in which various groups committed to publically continue to work for reconciliation even after the TRC finishes its work this week.

Read the "Action for Reconciliation" statement that the CRC submitted to the TRC.

The TRC is an independent commission set up to hear the stories of the survivors of the residential school system, educate Canadians about this recent history, make recommendations to the federal government, and found a national research centre.

For more than 100 years, Indigenous children in Canada were removed from their families and sent to residential schools, which were often run by churches and were meant to "kill the Indian in the child".

During the first half century that the schools operated, it's estimated that nearly half of the students died from abuse, malnutrition, neglect, and the spread of diseases in cramped, chronically underfunded living quarters.

The schools were a tool of assimilation to remove Indigenous children from their communities in order to make them more like the dominant Canadian culture, which meant Christian, English- or French-speaking, and having skills that were deemed civilized. The last residential school closed in 1996 and thousands of survivors are still alive.

This "Action for Reconciliation" statement follows a statement that the CRC made in 2012 at the opening of the TRC in Saskatoon, Saskatchewan, as well as a letter sent to all Canadian churches in April 2015 encouraging them to participate in the TRC.

On Monday, Roorda and Vandergrift also presented the commission with a painting from the reForming Relationships art tour and a plaque from the Milestones Project, representing the work of the Holy Spirit to bring the CRC towards reconciled relationships.