Coming into the CRC 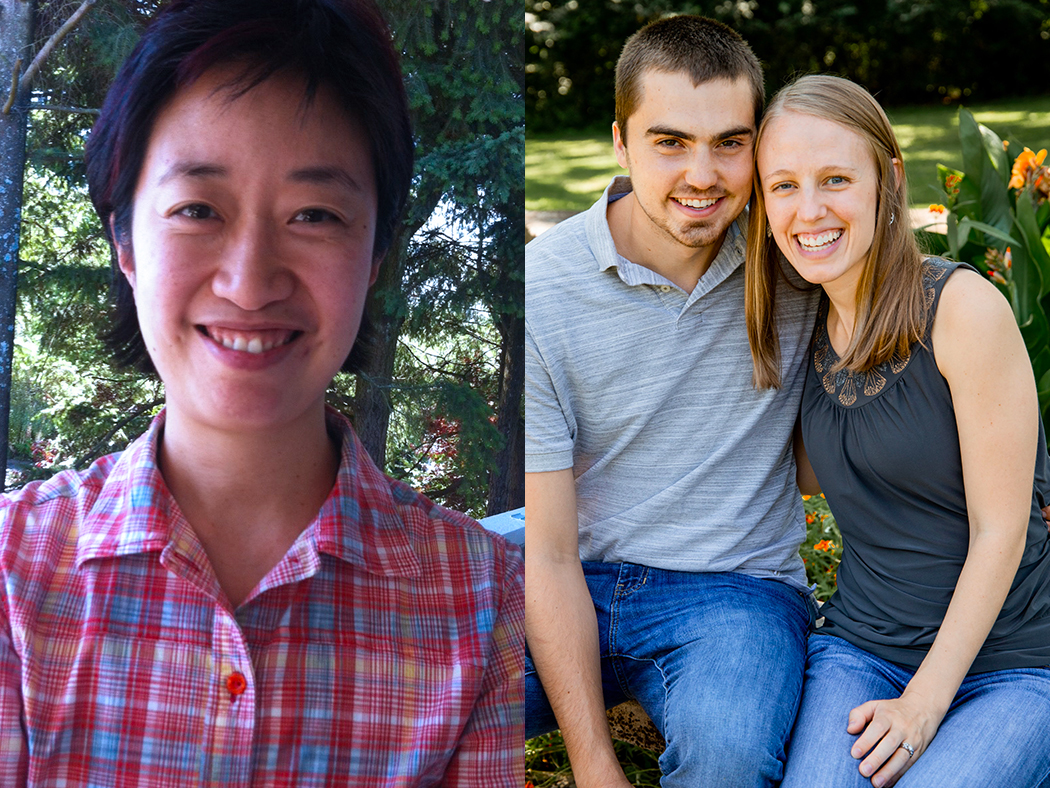 Drawn by Reformed theology and its strong sense of mission, an increasing number of pastors from other denominations are seeking to be ordained in the Christian Reformed Church in North America through its Ecclesiastical Program for Ministerial Candidacy (EPMC).

“For most aspiring pastors who have been raised in the CRC, it is an obvious choice to enroll in Calvin Seminary's excellent master of divinity program,” said Susan LaClear, director of the CRCNA’s Candidacy office.

“But there are many who find themselves drawn to Reformed theology or enfolded by a CRCNA church while they are already enrolled in or have completed an M.Div. from another seminary.”

Currently 47 pastors from other denominations, some of whom are already working in a CRC context in the U.S. or in Canada, are in various stages of the EPMC program, said LaClear. And since 2012 nearly 130 people have completed this program, which works to meet the growing need to accommodate and train people seeking to serve as pastors in the CRCNA.

Coming from a range of backgrounds, said LaClear, participants in EPMC are “trained in Reformed theology/ministry by Calvin Theological Seminary professors and denominational staff, and they form deep connections with supportive CRC pastors and mentors.”

For a more detailed picture of the various participants in EPMC, here is a look at four people enrolled in the program.

A Covenant with God

Josephine Wong was leading worship in the chapel at her college in the University of British Columbia several years ago when she and the congregation began singing the popular and powerful song “All of My Days.”

“As I sang about worshiping God ‘all of my days,’ I felt the Spirit really home in on me,” she said. “I felt it in my heart.” She said she felt that the Spirit wanted her to serve God as a pastor.

After that startling experience, she said, she took more religion classes at the university and graduated with honors in religion and a major in psychology. And soon afterward she began working on and completed a master of divinity degree at Regent College in Vancouver.

In her mind she had the intention to become ordained as a pastor, she said, but thought that would be impossible — until she spoke with some men who were enrolled with her in a preaching class at Regent.

“I told them that the nondenominational church I had been going to for years wouldn’t ordain women, and they said I should come over to the CRC, which had started to ordain women,” she said.

She liked the idea, but instead — after she finished at Regent — her church sent her as a teacher to Taiwan for several years. Then, when her home church outside Vancouver split over a dispute, the church asked her to return to serve, as she had in the past, as a  youth leader.

“I served in that way to help heal that church,” she said. “I got the youth ministry up and running again.”

From there, she moved on.

After earning a degree in counseling, Wong began work in 2014 at the Union Gospel Mission in Vancouver. In her experience there, which has continued for the past seven years, she said, “I have learned how to provide better pastoral care and have worked with women who have been abused and are in transition.”

Ministry at the gospel mission has given her the chance to meld her passion for ministry with counseling.

“God opened the door, and I leaned in . . . helping the homeless, people who are fighting substance abuse, and many others experiencing pain and trauma.”

Then, more recently, she received a call from Tapestry Church in nearby Richmond to work with young adults at one of the church’s campuses. Tapestry is a CRC congregation. Seeking now to be ordained, she said, she finally took up the suggestion of the men in her preaching class at Regent.

She is participating in EPMC and hopes to be ordained to work at Tapestry next year.

“Even though it has taken me 20 years, I have no regrets,” said Wong. “I’m taking EPMC after 20 years of lived experiences.”

In addition, she said, she thinks back to that time when she was singing “All of My Days” and felt that the Spirit was asking her to make a covenant with God to become an ordained minister: “Though it may have taken many years, I’m renewing my covenant with God. He’s with me, and I’m with him.”

Making a Place for Worship in the City

The overhead “L” train rumbles by, traffic rushes along, horns honk, and people outside shout and laugh as Erin Pacheco and her husband, Moises, lead singing and prayer for a handful of worshipers gathered at a church-plant service on the West Side of Chicago.

Called Grace in Garfield, the church plant is fairly new, and Erin Pacheco is taking the EPMC program so that she can become an ordained minister and formally lead Grace with her husband in that capacity.

“All of us in our church plant have a sense of the neighborhood and its place in the city,” she said. “I think we are able to bring a theology and practice that can be valuable to the West Side of Chicago.”

Her path into ministry work began, she said, when she played the piano and sang for services at Clearview CRC in Oakville, Ont., which she attended as a child and into her teens. She also attended a Christian school, she said.

“I was in high school when my church opened up different roles for women, and they called Joan deVries as our senior pastor. All of that helped to normalize the role of women in ministry for me,” she added.

Then, attending Trinity Christian College in Palos Heights, Ill., said Pacheco, she found herself attracted to the diversity and atmosphere of Chicago. At Trinity, she had studied music, philosophy, and theology.

So, after graduation, she said, she took a position — “and they were brave to hire me” — as worship director at Grace and Peace CRC, located in a diverse but poor neighborhood on the West Side of Chicago.

“I learned about cross-cultural ministry there, and I met my husband, who is a commissioned pastor in the CRC,” she said.

She then worked on a master of divinity degree at Trinity Evangelical Seminary for seven years as she raised her two children and was involved in other things, she explained. She now also teaches and works at Trinity Christian College, as well as leading worship when asked by other churches to do so.

Pacheco said she especially looks ahead to becoming an ordained pastor. But her focus will likely remain on the church plant, she said, which she believes has a rich and vital life that might inspire other faith communities.

“A lot of what we do is to have honest conversations,” she said. “We ask real questions. I think more people need what we have to offer.”

Caleb Bergmann grew up in Colorado and attended an evangelical church. Even though it was something of a “hippie” church, he said, it helped to nourish his desire to serve in ministry.

“My parents were part of a guitar-style, Jesus group. Somehow I knew growing up that I wanted to be in ministry,” he said.

After high school, he attended the Moody Bible Institute in Chicago. And he soon realized, he said, that the church back home had been short on teaching Scripture. “When I started taking classes, I realized I didn’t know a lot about theology,” he said.

Bergmann’s wife, Alyssa, grew up in a Baptist church, where she felt a calling to ministry, she said — and that led her to enroll at Moody, where she met Caleb.

“I really do love the Bible and wanted to learn Bible translation,” she said. “But I didn’t enjoy going to Moody.”

Together, she and Caleb decided to leave Chicago to study in the M.Div. program at Beeson Divinity School, a nondenominational seminary in Birmingham, Ala.

During that time, the married couple got involved in an Acts 29 church in the area. Adhering to a neo-Calvinist theology, Acts 29 has worked hard to plant churches all over the world.

“We joined the church in Birmingham and loved it,” said Caleb. “Acts 29 relly hit us. We liked the energy.”

However, after attending Beeson, Alyssa wanted to find a place where she could be ordained so she could preach and perform such functions as preside over the Lord’s table.

“I knew about the CRC and that it was a place where we could fit. Also, we craved the structure of it,”  said Caleb.

With the help of David Koll, former director of the CRC’s Candidacy office, they learned about EPMC and began to look for opportunities to do ministry.

They eventually landed at Lafayette (Ind.) CRC, where they have been able to learn more about ministry. Caleb preaches occasionally and leads one of the church’s small groups.

In order to fully support themselves, Caleb works in construction and Allysa teaches Bible at a nearby Christian school.

Both are participating in EPMC and looking forward to being welcomed into the CRC as pastors.

“We’re thankful that we can take classes online,” said Alyssa.

They have learned much about the CRC — its history, its commitment to theology and prayer, and the push to become more deeply involved in multicultural ministry.

“Not having grown up in the CRC is seen as a strength,” said Caleb. “I didn’t even know what a council meeting was until connecting with EPMC. I appreciate the flexibility of the program. I haven’t been discouraged at all. . . .”