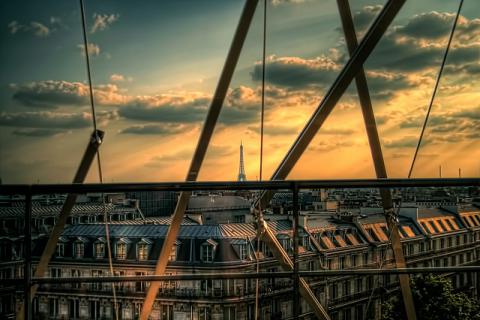 Phillip Leo and Julia Vanderveen are pleased by the responses they have received in their work as two of the 10 regional organizers for the Christian Reformed Church’s Climate Witness Project.

As pastor of Calvin CRC in Oak Lawn, Ill., Leo has been connecting with congregations across the Chicago area.

Vanderveen, a pastor at First CRC in Vancouver, B.C., has been sharing the project with churches in her region, along with church member Lindsay Vander Hoek.

“Many congregations agree that this is an essential part of their call to stewardship,” said Vanderveen, who graduated from The King’s University, Edmonton, Alta., with a degree in Environmental Studies.

“Churches are passionate about caring for God’s creation and have jumped right on board.”

Leo said the same is true of churches with whom he has met to discuss the project that is part of the lead-up to the 21st Conference of the Parties, or COP 21, taking place Nov. 30-Dec. 11 in Paris.

At COP 21, the nations of the world will be seeking to develop agreements about how to respond to the dangers of climate change.

“Many of the churches that I’m working with are delighted that the CRC has taken up this project,” said Leo, who holds a master’s degree in environmental studies and social justice from Loyola University. “For churches, it is a way for them to act on an important social justice issue like this.”

Rev. Richard Killmer, co-coordinator of the project for the CRC’s Office of Social Justice, which launched the effort earlier this year, said the effort has several components.

Along with learning about COP 21, said Killmer, the churches discuss issues related to climate care, especially by looking at Synod 2012’s statement urging all members of the denomination to work toward individual and public solutions to the challenges posed by climate change.

Also as part of the project, said Killmer, churches have the chance to view the CRC documentary Climate Conversations: Kenya chronicling the impact that climate change is already having among poor people in Kenya.

Looking forward, many churches in the project have committed to meeting with their lawmakers in the U.S. Congress and in the Canadian Parliament to make sure that recommendations coming out of COP 21 are implemented.

“The Climate Witness Project has turned out to be a significant ministry,” said Killmer.

“Though we aimed to find at least 100 people in thirty congregations, our regional organizers recruited many more. We now have about 150 people, who are called Climate Witness Partners.”

Killmer said it has become clear that many CRC members want to have a strong witness on this issue in their congregations, as well as at COP 21, “because they believe it is crucial that Christians work to protect God’s creation.”

The CRC, he said, has named a delegation of four people to attend the Paris meetings. They will serve as witnesses during COP 21 to the commitment the CRC has in addressing climate change in both Canada and the United States through strong public policy.

“They will also prepare a daily description of the progress being reached by the nations of the world. These updates will be sent to the 150 or so Climate Witness Partners in the U.S. and Canada,” he said.

The project also involves asking 10 CRC members to write an op-ed for a local newspaper on the results of the Paris meeting.

Killmer said plans are in the works for additional study and other activities in congregations after the first phase of the Climate Witness Project is completed on Jan. 31, 2016.

Both Leo and Vanderveen say they are grateful that the project will not end after COP 21. This effort, they say, has tapped into the strong desire churches have to address climate change.

“Many churches want to be faithful to the invitation by God to be earthkeepers, to tend the earth and not to just take from it,” said Vanderveen.

“When you think about this issue, it can be daunting, but there are things we can do to make a positive impact on the environment around us.”

Many members of her church, for instance, have committed to walk or bike to Sunday services instead of driving cars. The church supports community gardens. And as a way to save energy, the church decided not to buy a dishwasher; instead, members wash dishes by hand.

In Chicago, Leo says he has learned of conservation efforts that churches had already undertaken before they became part of this project. One church, for instance, did an energy audit to look at ways in which it could reduce carbon emissions and save energy.

Other churches already had groups in place that were studying the issue and discussing how as Christians they could address it.

“This project resonates with churches because it has to do with the restoration of the earth, being good stewards, and doing what the gospel requires,” said Leo.

In addition, the project highlights the reality that it is the poor, in places such as Kenya, who suffer the effects of climate change in ways that larger countries don’t, he said.

“Jesus was concerned for the ‘least of these,’ and it is often the poor who are the first to be affected by climate change,” he said.

“It is important to realize that we have a Savior God who teaches that the reconciliation we find in him starts with our own bodies and extends to all creation.”