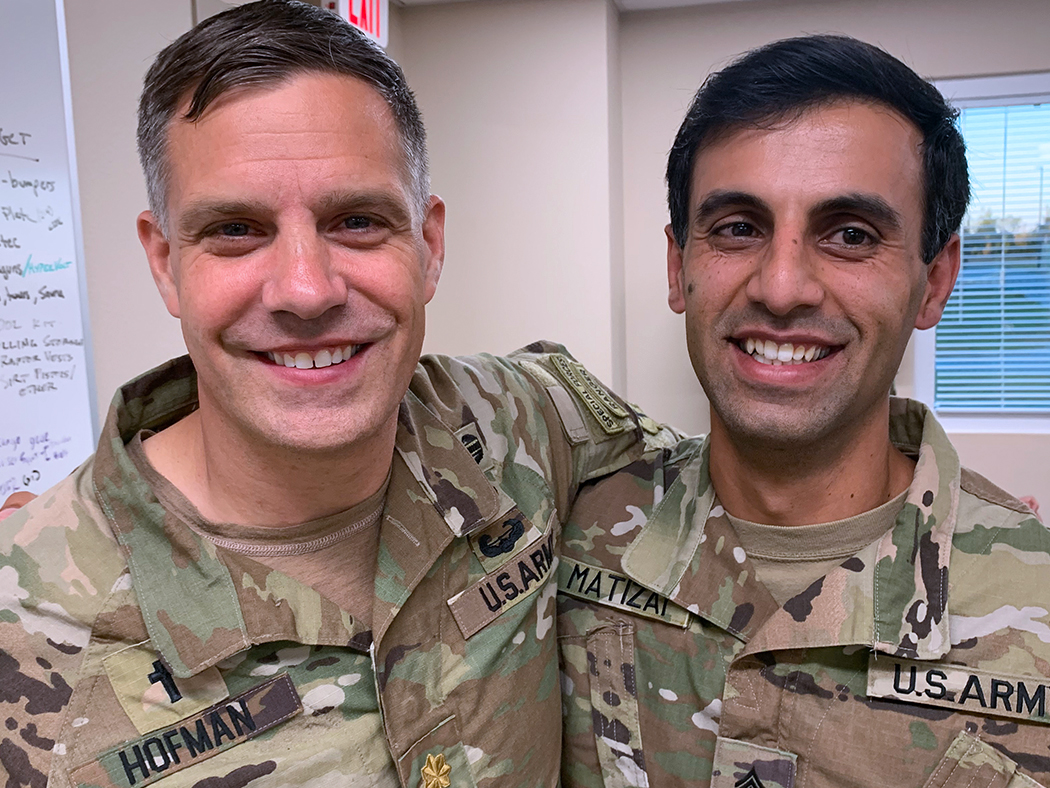 Peter Hofman, left, met with the man, now a U.S. soldier, who served as his interpreter in Afghanistan.
Photo: Peter Hofman

Four Christian Reformed Church  chaplains recently took time to reflect on experiences they had when they were stationed in Afghanistan. They also spoke about the turmoil now occurring at the airport in Kabul as the United States and its allies work to airlift Afghans, who supported and in many cases worked for them, out of the country. (All of these chaplains made clear that they were speaking only on behalf of themselves.)

Chaplain (Major) Peter Hofman served two tours of duty in Afghanistan, from July 2010 to March 2011 and January 2012 to August 2012, each time with the 3rd Special Forces Group.

He said many sharp memories have come back to him as the U.S. and other international partners pull out of Afghanistan and as chaos unfolds both within and outside the airport in Kabul.

He recalls visiting, praying, and talking with Navy Seals and Green Berets stationed in small groups in far-flung towns in the hopes of building friendships with residents of communities in Afghanistan. But they were in the midst of war, and several of the soldiers were killed by  Taliban fighters, meaning that Hofman needed to conduct funerals and counsel grieving soldiers in-country and then speak to their families when he returned to the U.S.

Given the toll the war has taken, Hofman said, he knows questions are rising even as the American pullout has yet to be completed by way of the ongoing evacuation at the airport.

“Maybe the future can hold some positive things, but right now there are so many vets and other people who are watching what is happening and dealing with a lot of emotions,” he said.

“I know some of them are asking, ‘Was the war and its cost worth it?’ I think this will ring in people’s minds for years to come.”

“As I watch what is unfolding in Afghanistan, I find myself thinking about what I gave, for a year and a half away from my family ….

“Then, naturally, I think of those who paid a much steeper price with their bodies or those who gave the ultimate sacrifice with their lives. I honestly waffle back and forth between anger, sadness, and grief.”

However, the strong bonds he forged with the service people with whom he served, including Afghans, endure, he said.

Once, he said, while he was at a meeting after he had returned to the U.S., a soldier came up and greeted him. Dressed in his uniform and with a smile on his face, the soldier asked, “You don’t remember me, do you?”

It turns out the man had been Hofman’s interpreter in Afghanistan. He had come to the U.S., became a U.S. citizen, and then joined the Army.

“I didn’t recognize him because he was out of place,” said Hofman. “But it gave me great joy to learn what had happened to him.”

Chaplain (Lieutenant Colonel) Tim Won served in Afghanistan from March 2010 to March 2011, traveling all over the country as a chaplain with a heavy-construction engineer battalion. The battalion built roads, police stations, and combat outposts for soldiers.

Going from place to place, Won met many Afghans and often had open discussions with them about religion and other topics. And now many faces come to mind, he said, as he serves at Womack Medical Center at Fort Bragg, N.C.

“I developed friendships with many of the people we met,” he said. “Right now, it makes me very sad, and my heart goes out to them. To see the fall of the government and the people who are in danger is hard.”

Won serves with the 82nd Airborne, the group recently deployed to the  airport in Kabul. He was on hand as many of the soldiers prepared quickly and flew off for duty in Afghanistan. He continues to pray that they stay safe as they seek to evacuate thousands of people from the country.

Looking back, Won added, “I also have some awesome memories from serving there. We drove all over the country, and I saw amazing sunrises and, even with the terrible poverty of the people, so much beautiful country.”

Thinking of what is happening now, he said, he turns to his faith for a measure of solace. “We remember that everything is in God’s hands,” he said.

Now serving as a chaplain in Okinawa, Japan, Chaplain (Captain) Cornelius Muasa was deployed to Afghanistan in 2012.

He was born and raised in Kenya, studied at Calvin Theological Seminary, and later became a U.S. citizen and joined the Army.

In a recent blog, he asked: “Was it worth it? This is the question in the minds of many of us as we watch events in Afghanistan.”

“This is not a new question,” he said. “I was asked that very question eight years ago after my battalion sustained multiple casualties. I was helping a platoon find meaning in their grief, and regain their sense of purpose for the mission. A soldier holding back tears asked point blank: ‘Is it worth it, Chaplain?’”

Muasa said that was the toughest question of his entire deployment. “I knew it was not just my question to answer. As a group we needed to find our way out of despair if we were going to complete our tour with honor,” he wrote.

“Three words were key in helping us get back on the proverbial horse: faith, hope, and love.”

As for himself, said Muasa, his faith in God gave him the strength to leave “the wire” (the base) and join soldiers and airmen on missions.

Keeping Tabs on the Taliban

Now director of the CRC’s office of Chaplaincy and Care, Tim Rietkerk said he grieves for the young people in Afghanistan and especially the girls and women there, who over the past several years have been able to attend school and pursue opportunities that were formerly prohibited under the Taliban.

News reports say that the Taliban have pledged to allow women freedom, but some stories indicate they are already threatening the rights of women and forcing them to wear clothing that covers most of their bodies. Some say women have been killed or abused.

“We spent a lot of resources, effort, and lives to help the people of Afghanistan,” said Rietkerk, who served in Afghanistan in 2003 with the 7th Special Forces Group.

In recent days, Rietkerk said, he saw reports on the news of members of the Afghan army laying down their weapons enmasse and simply walking off the battlefield, sometimes leaving behind their uniforms as well. This didn’t surprise him; the Taliban likely made deals for them to surrender so easily.

Rietkerk also thinks of the families he served as a chaplain, comforting those who lost a loved one in Afghanistan. “We can all reflect on the sacrifice,” he said. “For many of the families, seeing what is taking place now brings them back to when they were told the awful news of their loved one’s death. Some families will wrestle with it as something they carry with them the rest of their lives.”

As the withdrawal continues amid ongoing struggles at the airport in Kabul, Rietkerk said he has checked in with most of the CRC chaplains who served in Afghanistan to offer support and a chance to reflect on their service. Many hope the Taliban will not wipe away all of the progress made in providing human rights — and that they don’t turn, as they have repeatedly done in the past, to torturing people who are not on their side.

“With cell phones and social media, I’m hoping the world can continue to see what the Taliban is doing” and find ways to keep them accountable, he said. “Please pray for people in harm’s way and for wisdom for the leaders in this difficult challenge.”