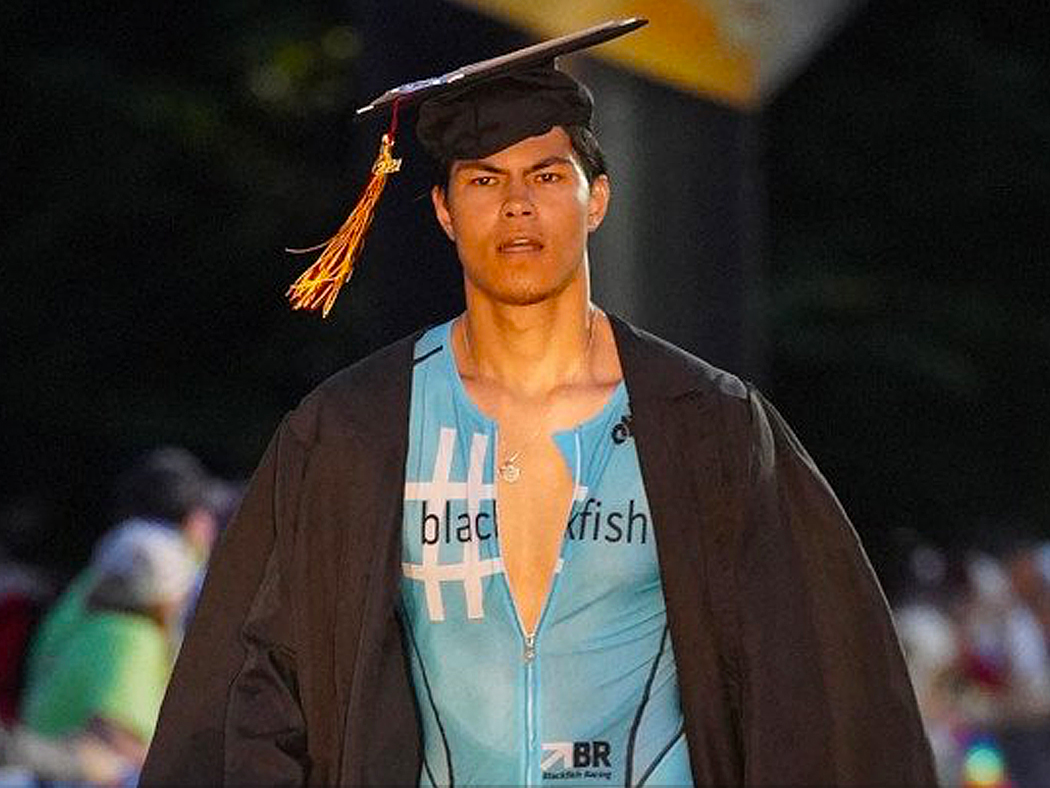 In May, on the same day he graduated — but not in person — from Calvin University, Mitch Wong swam 2.4 miles, biked 112 miles, and ran 26.2 miles during the 2021 Ironman Tulsa race. The Ironman is widely considered one of the most difficult one-day sporting events in the world.

To prepare himself for this intense triathlon, Wong worked out an average of 10 hours a week for nearly a year and a half. Over the course of his training, he estimates that he swam 100,000 yards, biked 5,000 miles, and ran 1,300 miles.

How did Wong manage to accomplish this ambitious goal? He acknowledges that he couldn’t have done it without ongoing support and guidance from two key mentors: Calvin alumni Brian Kerssies and Nathan Vandenbroek.

Just a couple years ago, Wong could have never imagined running an Ironman. He spent his high school and early college athletic career as a goalie on the lacrosse team in order to avoid running, an activity that his coaches tended to use as a form of punishment. Although he enjoyed staying fit and being an athlete, he “despised” every type of activity or sport requiring great physical stamina. This led to a deep respect and awe for the Ironman World Championship athletes he saw on television.

“I remember thinking how incredible and how exclusive that group of athletes were. Who in their right mind would swim, bike, and run for 14 hours straight?” Wong said. “I didn’t think I had ever done anything for that long. That was something they could do, but me? Never.”

Ironically, Wong’s self doubt about his endurance capabilities was exactly what led him to pursue the sport halfway through his college education. After quitting the lacrosse team, he tried to find a new way to stay active. He weightlifted for a while, but unfortunately, it didn’t offer him enough of a challenge.

That’s when he first began to consider competing in a triathlon. He joined a training group in his hometown and immediately felt at home among the “inclusive, helpful, and gracious” athletes. After completing a few triathlons and becoming “hooked” on the sport, he realized that it was time to push himself further and do what he felt was “impossible” — complete an Ironman.

Wong knew that he wouldn’t be able to attain the level of fitness necessary for an Ironman by himself, so he looked for ways to voice his dream to members of the Calvin community. As a resident assistant (RA) for Bolt-Heyns Timmer Residence Hall, he met Hennie Schoon, who served as his area coordinator. He knew that she would be a good person to tell.

“She was my biggest supporter in all the goals and aspirations I had as an RA, student, and athlete,” Wong said. “She’s always been a huge role model in the way she connects people.”

Schoon got Wong in touch with her former classmates, Brian Kerssies and Nathan Vandenbroek. The two were seasoned Ironman veterans; Kerssies had completed three races and Vandenbroek had done five.

Wong vividly remembers first meeting the pair for a meal at a Panera Bread. They told him the brutal truth: Ironman training was “difficult, expensive, and time-consuming” and there was no guarantee of even finishing the actual race.

“They wanted to know if I was committed,” Wong said. “And I was.”

As soon as Kerssies and Vandenbroek understood that Wong was truly serious about doing an Ironman, they also became serious about helping him reach his goal, providing athletic, financial, and mental support. They created a custom training plan for Wong, lending him gear and nutrition, and constantly checking in to ensure that he was making steady progress while staying healthy and injury-free.

They also accompanied him on long runs or bike rides on weekends during the school year.

“To have two veterans challenge me mentally and physically was so much fun,” Wong said. “They were also walking Ironman encyclopedias, so I unapologetically picked their minds about technique, race-day procedures, and more.”

Although Wong received additional support from friends and family, Kerssies and Vandenbroek ended up being his “two biggest supporters.” They motivated him and kept him going. At the end of each week, Wong always wanted to give his coaches “an amazing update” about his training. When he couldn’t, he did his best to make up for it the following week.

“I never wanted to disappoint them,” he admitted.

His coaches saw his consistent hard work and appreciated it.

“Very early on in dealing with Mitch, I knew he would be ‘easy’ to coach,” Kerssies said. “Mitch’s determination to succeed was evident throughout the journey.”

From Wong’s perspective, completing his first Ironman wasn’t just fulfilling as an athlete. The race also meant something to him as a college student and a Christian.

The day Wong competed in the Ironman was also his graduation day—May 23. This wasn’t Wong’s fault; graduation had originally been scheduled for May 15 until it was postponed. Wong chose to miss the official graduation ceremony, but he came up with an innovative way to celebrate his civil and environmental engineering degree instead: he walked across the finish line of the race dressed in his cap and gown.

“The end result was an amazing photo that I will proudly hold onto for the rest of my life,” he said.

Wong also felt that the Ironman helped him strengthen his faith and build God’s kingdom. The experience gave him an appreciation for how God created the human body.

“I have thoroughly enjoyed getting to know my temple—body—as it has changed and grown throughout my training,” he said. “God created us in his image, and the human body can accomplish incredible things.”

As a member of Vandenbroek’s racing team, Team Blackfish, Wong was also able to raise awareness for worthy causes such as preventing the slaughter of Japanese dolphins and preserving the water of the Great Lakes. Wong is excited to support other causes as well—he plans to run the Chicago Marathon on Team World Vision to raise money for efforts to provide clean water to developing countries.