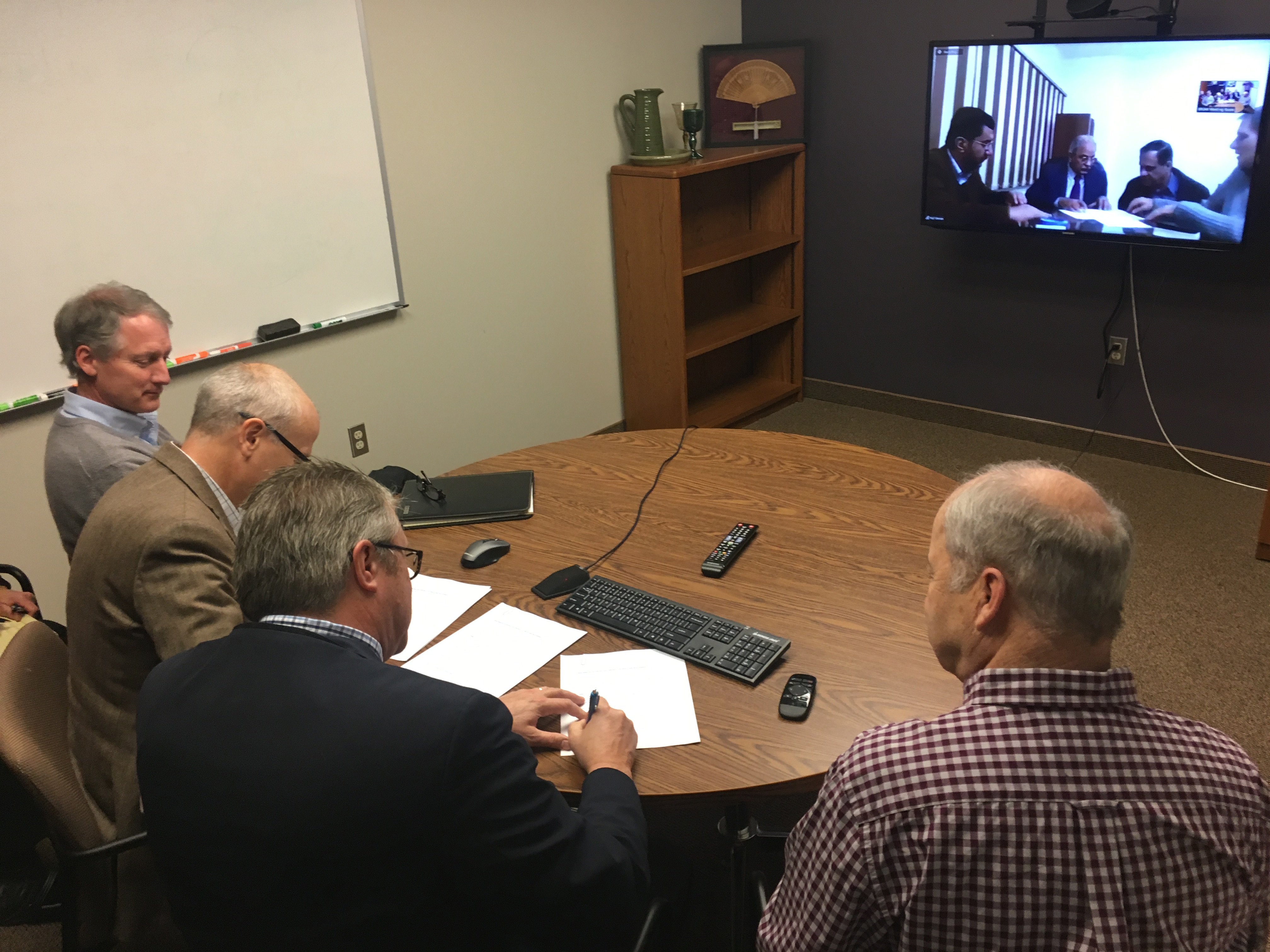 Representatives of three ministries sign document agreeing to new ministry partnership using media to reach out to the Arab world.

Back to God Ministries International

Also present from Egypt were Rev. Rafat Fathy, general secretary of EPCE; Rev. Amir Tharwat, pastor of Fagalla church in Cairo; and a board member of the EPCE media council.

“As churches and ministries who share a Reformed heritage and calling to build God’s kingdom, specifically in the area of media, we believe that God has been preparing us for some years to take a step toward this partnership and shared ministry in the Middle East,” explained Selles.

Selles and Fathy first met in person in Grand Rapids, Mich., at Synod 2016 of the Christian Reformed Church in North America (CRCNA), to which Rev. Fathy was an ecumenical delegate from the EPCE.

Prior to that synod, Selles and Fathy had had numerous other meetings by video conferencing.

As a result, the ministries signed an initial agreement in June 2016 with a final goal to move forward with the partnership. The document signed today, Dec. 13, 2017, makes the partnership official.

“Our vision is to see media used effectively in major world languages, like Arabic, to proclaim the gospel, grow disciples, and strengthen the church,” said Selles.

Opgenorth added, “This partnership fits our model of coming alongside strong indigenous ministries to help expand and strengthen their media outreach.”

“We are relaunching the Arabic media ministry partnership with the media council of the EPCE,” Selles explained. “Our new partnership ministry, called al-Hoda (an Arabic term meaning ‘the one who guides others back to the true way, or to God’), is set to begin producing programs by the end of the year.”

Al-Hoda began years ago as a ministry ofEPCE to reach the Egyptian church through printing a weekly newspaper. EPCE now represents more than 600 congregations and 24 schools. Many members of the EPCE serve in Egypt’s Parliament.

Coming alongside al-Hoda, BTGMI and WOH will assist in expanding their media ministry in multichannel ways.

Fathy noted, “We have a good relationship with Arabic churches throughout the world, but there is a lack of theological materials from a Reformed perspective.” He is looking forward to completing the translation of much-needed theological books and getting them into the hands of pastors.

Using the Internet, social media, and smartphone applications, al-Hoda programs will call people to faith in Jesus Christ. The ministry will also distribute discipleship resources for nurturing followers of Jesus. “Over time, our goal is to expand gospel program content beyond Egypt to the rest of the Middle East and the world,” said Selles.

Opgenorth added, “We believe that the partnership of BTGMI and WOH with al-Hoda represents a great step forward in expanding ministry among Arabic speakers, to see many come to faith in Christ and grow in discipleship.”

In closing the signing ceremony, Rev. Ekram praised God for this extraordinary development in the relationship between our two denominations, prayed for the next steps to be taken together, for fruitful and faithful ministry in the Arab world in the months and years to come, and for God’s grace and blessing to continue to bring growth and health to the Christian Reformed Church in North America.