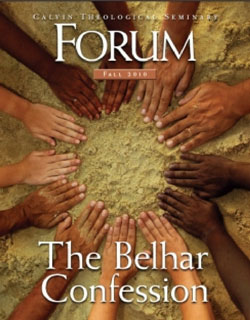 Calvin Theological Seminary faculty members make forceful, well-reasoned and passionate arguments for and against the Belhar Confession, a statement focusing on racial reconciliation, in articles published in the most recent issue of the Forum, the seminary's quarterly publication.

Faculty members of CTS all seem to agree that the Belhar, written by church leaders in South Africa, is a ringing call for racial equality and justice worldwide. Where they disagree is on whether Synod 2012 should make it another of the confessions—or standards of unity—of the Christian Reformed Church in North America.

Convinced church members needed time to review and discuss the Belhar, Synod 2009 decided to give the church three years to consider adoption of the Belhar by Synod 2012. Between now and Synod 2012, various gatherings will be organized at which the Belhar will be the focus. Some gatherings have already occurred.

Calvin Theological Seminary will, in fact, hold a panel discussion on the Belhar at 7:30 p.m. on Oct. 12 in the seminary auditorium. The discussion will be recorded and, if all goes well, broadcast live on the seminary lecture page.

To help people better understand the Belhar, CTS has presented the wide-ranging discussion contained in the Fall 2010 Forum.

"Forged in the fires of racial injustice in South Africa in 1986, the Belhar Confession speaks eloquently to the need for unity, reconciliation, and justice in the church," writes Rev. Cornelius Plantinga, Jr. in an introduction to the recent issue of the magazine.

Response to the proposal to make the Belhar a fourth confession of the CRCNA, placing it on par with the Belgic Confession, the Canons of Dort, and the Heidelberg Catechism, are varied in the church, as well as among faculty at CTS, writes Plantinga.

Last summer, the Reformed Church in America adopted the Belhar at its annual synod after a majority of classes in the denomination voted in favor of it.

An early section of the Belhar helps to focus the theme of the document when it addresses the issue of unity, saying that unity "is, therefore, both a gift and an obligation for the church of Jesus Christ; that through the working of God’s Spirit it is a binding force, yet simultaneously a reality that must be earnestly pursued and sought . . . "

The CRC is being asked to pursue and seek this type of unity.

"The adoption of the Belhar Confession will help the CRC move closer to this goal (becoming a multiethnic church that promotes racial justice)," writes Mariano Avila, professor of New Testament at CTS. Adoption of the Belhar, writes Avila, "will help us in our ministry to the world, for the Belhar speaks in a powerful way to the sinful racist realities that are far from being eradicated from our hearts and societies."

The Belhar was first adopted by the synod of the Dutch Reformed Mission Church in 1986. The document was written as a response to apartheid, the legalized and socially sanctioned separation of the races in South Africa. In following years, the church merged with another church. But the new church has held on to the Belhar and has asked other Reformed denominations to adopt it.

While admitting that the Belhar has power and value and ought to be taken seriously, especially given its theme and message, John Bolt writes that he believes that Belhar veers in places from orthodox Christian teaching and offers an alternative path on how Christians can achieve reconciliation and unity. Bolt is a professor of systematic theology at CTS.

"The key to this alternative path is the Belhar's focus on the social, economic, and political arenas as the locus for achieving reconciliation and unity, rather than on our spiritual poverty (as people who rely on God’s grace and find their unity in the blood of Christ)," writes Bolt.

"I strongly desire a testimony that exposes the sin of racism and points us forward to reconciliation and unity. I do not believe the Belhar will or even can accomplish this."

On the other hand, Ronald Feenstra, professor of systematic and philosophical theology, calls the Belhar "one of the church's treasures." It addresses a sin that has long been with the church.

"Speaking from the pit of oppression and suffering, the Belhar affirms important biblical themes such as the triune God’s care for the church and concern for justice."

Confessions of the church can help people better understand how their denomination understands the Bible and the basic doctrines of the Christian faith, writes Lyle Bierma, professor of systematic theology at CTS.

"They also serve as testimonies or statements of identity," writes Bierma. "In this role, the Belhar Confession would help the CRC to present a somewhat different face to the world than we have in the past."

It is not a perfect document, as others point out. Still, writes Bierma, the Belhar would allow the CRC "to engage in biblical truths that are muted in our confessions . . . (and would) hold ourselves more accountable for sins of the past and behavior in the future."

John Cooper, professor of philosophical theology at CTS, writes that he believes the Belhar has merit and addresses important issues, but should not be elevated to the status of being a confession, a fully sanctioned, synodically approved teaching and preaching document, of the CRC.

"My view is this: Properly understood, the Belhar's condemnation of racism, expression of solidarity with victims, and affirmation of racial reconciliation in Christ are crucial implications of the Gospel that we should endorse. But its theological perspective is problematically ambiguous."