Abraham Kuyper on Islam and Christianity 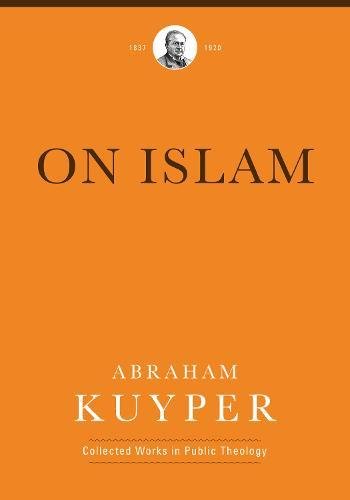 Riding in a boat at night across the still waters of the Sea of Galilee, Abraham Kuyper looked out on the dark shoreline and experienced “stirrings . . . from the hidden world of spirits, which aroused a sacred past in my imagination.” The Dutch theologian, politician, and journalist conveys these thoughts in his book On Islam.

“It was the name of Jesus that called to me from the surrounding shores and across the water over which I was gliding,” recalls Kuyper in the book, now translated into English and recently released by Lexham Press and the Acton Institute for the Study of Religion and Liberty.

The setting reminded him, he wrote, of how from a nearby hill “resounded the Sermon on the Mount in its quiet majesty. These very waters upon which you are now sailing were calmed by his word of power when they crashed about in the storm.”

On Islam is the latest release in a 12-volume series of translations of eight key works by Kuyper, known as a leader in Reformed theology and thought.

Created in partnership with the Abraham Kuyper Translation Society and the Acton Institute, the Abraham Kuyper Collected Works in Public Theology is bringing out Kuyper’s theological works for the first time in English —and this latest book is a combination of travelogue, historical analysis, and reflections on the significant role Islam was playing at the turn of the 20th century in the Mediterranean world.

“Kuyper was a European man of his time and culture, but he was also a keen and curious observer,” writes Doug Howard, a Calvin College history professor who provided an introduction and the footnotes for the book. “He wasn’t dismissive of the religious spirit. He believed all humans are searching for God.”

Kuyper embarked on his trip to Palestine in 1905, not long after he lost an election to serve another term as prime minister of the Netherlands. Sixty-seven years old at the time, Kuyper would visit more than 80 sites and cities and some 20 different countries before returning home.

He spent nearly two years writing his reflections, from which On Islam comes. Although his commentary touches on many subjects related to Christianity, such as his visits to Ephesus, Mount Tabor, and Jerusalem, his encounter with Islam weaves through much of this volume.

Encountering Islam for the first time, Kuyper had to confront his own stereotypes and the prejudices he held regarding the religion.

“His trip fulfilled a lifetime dream: Kuyper could finally visit the lands of the Bible and Greco-Roman antiquity in whose literature and heritage he had been so thoroughly schooled,” writes James Bratt, a retired Calvin College history professor, in the “Editor’s Introduction.”

“But he also came in touch for the first time with Muslims — in a wide variety of roles, settings, ethnicities, and ritual practices.”

For instance, Kuyper was fascinated by the history of the Sufi dervishes — an order of spinning, shouting, ecstatic mystics — and what roles they played into the religion founded in the seventh century by the prophet Muhammad.

In one section of the book, Kuyper recounts the history of a dervish monastery in Konya, south of Ankara in Turkey. He also discusses, earlier in the book, how the number of dervishes to take part in a dance is “determined by the mystical numbers seven, nine, or thirteen.”

“Before the start of the dance, the dervishes bathe themselves in prayer, asking for forgiveness of sins and sanctification since the dance represents ecstatic communion with Allah . . .” writes Kuyper.

He then describes one of the dances in which the dervishes bow, spread out their arms, and “whirl like a top at an ever faster pace for five straight minutes with heads slightly hanging over the right shoulder from the momentum.”

After doing this three times, he writes, “they collapse to the ground in ecstatic delirium.”

In his travels, he attended a Ramadan service at the Hagia Sophia, then an imperial mosque in Istanbul that had once been an Orthodox cathedral.

“The entire space was illuminated by beautifully arranged suspended lighting,” he writes. “Under this flood of light we could see thousands of Eastern prayer mats on the floor, arranged in row.”

Along with others, he listened to a “first-order” preacher.

“Dear friends, in the first place, it is all about your soul,” the imam began, as Kuyper recollected. “But the soul is something so mysterious that you almost have no grasp of it.”

Also contained in this volume are Kuyper’s reflections on such topics as the “Law and Spirit in Islam,” “Why Did Islam Replace Christianity?” “Islamic Learning,” “Pan-Islam,” and “Religion and Imperialism.”

In his conclusion to the chapter “The Enigma of Islam,” Kuyper acknowledges that Islam’s “principal ideas and fixed forms are clear, simple, and easy to understand,” and “to the zealous it offers the ideal combination of power and might, capable of igniting the deepest passions.”

Kuyper also noted, however, that in Islam “one hears nothing of a deeper awareness of sin and a desire for reconciliation” with God.

Howard explains that in this book Kuyper describes what he observed, “and that is valuable.” But he also approached his journey with the eyes of an educated, Christian European who believed that the Christian West, with its superior system of religious belief and technology, was apt to triumph over the East.

At the same time, Kuyper was aware of and writes about the many social, historical, political, and religious currents that were at work in the world as the 20th century opened — and, as we know now, World War I and all that followed soon began to unfold.

By encountering all that he did, Kuyper stepped out of his life in Europe to get a wider view in which he saw and experienced cultures and religions at work helping to shape world events — for good and for bad.

“I now understood much more strongly than before embarking on my trip that an excellent way to ward off patriotic overconfidence and smugness is to occasionally transport yourself to an entirely different world,” Kuyper writes in the book’s conclusion.

On Islam is now the sixth volume in the series to come out in print. For more information, visit the Abraham Kuyper Collected Works in Public Theology website.