Touched by Devotion in South Korea 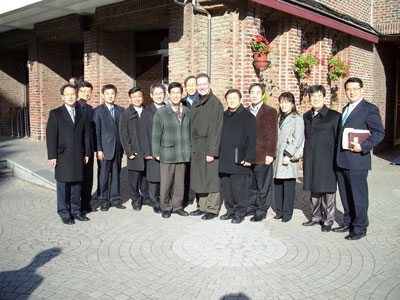 Rev. Neal Plantinga knows that his sermons in South Korea are hitting home when he looks out over the packed church and sees people with a hand over their hearts and a look of radiance on their faces.

They hold their hands over their hearts as a gesture meaning that the sermon is touching them and teaching them about God. The radiance likely comes from the appreciation they have to be listening to a powerful sermon about the God they love and hunger to know more about.

Plantinga is a the well-known Reformed preacher, teacher, and current president of Calvin Theological Seminary in Grand Rapids, Mich. Plantinga is also author of several books that combine a deep knowledge of theology with a sharp, accessible, and yet still scholarly writing style.

"When you are preaching and teaching people who obviously want what you are bringing, a bond is established and you have a sense that you are doing what God equipped you to do," said Plantinga, who has traveled to South Korea five times, the most recent occasion in August.

He was invited to Hanyoung Theological University and Seminary in Seoul to teach and preach Reformed material to a student body and faculty that are in the process of moving from a Pentecostal emphasis to a more Reformed, Presbyterian focus in their studies and in the teaching. He was there for a week.

"This last time I spoke about the Reformed worldview, about reformation in all of society, and common grace," said Plantinga, who will step down as president of CTS at the end of this academic year. He will be replaced by Rev. Julius Medenblik, a pastor and successful church planter.

Many Korean students have attended CTS, and Plantinga has always been impressed by how brilliant many of the students are in performing their studies. Also impressive to him is how South Koreans are able to combine a high level of intellectual rigor and yet at the same time have hearts that are wide open to praising God in rousing song and prayer.

"I find that respect for Christian learning and heartfelt devotion is a very impressive combination that North American Christians can learn from," said Plantinga. On a personal level, being with people who are devoted to the Word and to heartfelt expression of their faith helps him experience a powerful presence of God, he said.

Yet another benefit of his Korean visits, as well as visits to other countries, has been to give him a sense of the vastness of the church and how it has become a powerful magnet in places where you might not expect it, he said.

"We belong to the holy, catholic church and are called to bring the gospel to every tribe, tongue, and nation. Becoming acquainted with the church in so many settings has been deeply valuable for me," said Plantinga.

In November 2009, Plantinga also spent a week at Hanyoung Theological University and Seminary. He was accompanied by Pastor Christian Oh, Plantinga’s former student and a former trustee of the seminary, who served as his translator.

The church was founded in 1978 by Calvin alumnus John Oak, and is currently led by another CTS graduate, Senior Pastor Jung-Hyun Oh. Plantinga also preached in two Presbyterian churches and in the Yoido Full Gospel Church—which, with its 500,000 members, is the biggest congregation in the world.

In churches large and small, he has "experienced a very impressive atmosphere of reverence before God. You can see it in their body language, their devotion, reverence, and love," he said.

The Presbyterians were among the first Protestant denominations to send missionaries to Korea. The stress they placed on reading and education was welcomed by many Koreans. The notion of independence and freedom before a forgiving God also touched many Koreans.

Before the Korean War, the Presbyterians were very strong in North Korea. Most of them fled to the South and fought in the war, battling side by side with South Koreans in their struggle to liberate Seoul from North Korean occupation.

After the war, many of the Presbyterians became South Koreans.

More than 18 million of South Korea's 44 million citizens are Christians. Of these, more than 15 million are Protestant, including more than nine million Presbyterians. In South Korea today, there are about 100 Presbyterian denominations.

While Korean Presbyterians have many outreach programs, they tend not to see a strong connection between remaining orthodox and yet being called by the Bible to perform acts of social justice.

They do, however, have a strong missionary zeal and have sent thousands of missionaries to countries all over the world. "They are concerned the gospel be heard anywhere it can be," said Plantinga.

Once he retires as president of CTS, Plantinga will take on a number of writing projects and continue teaching, but his hope and plan is to return to Korea within the next few years to preach and teach and be renewed by the devotion he experiences in the Korean church.

"I've been touched in my heart and enriched by the Presbyterian church of South Korea in a way I can’t quite explain. I appreciate being able to worship with them," he said.