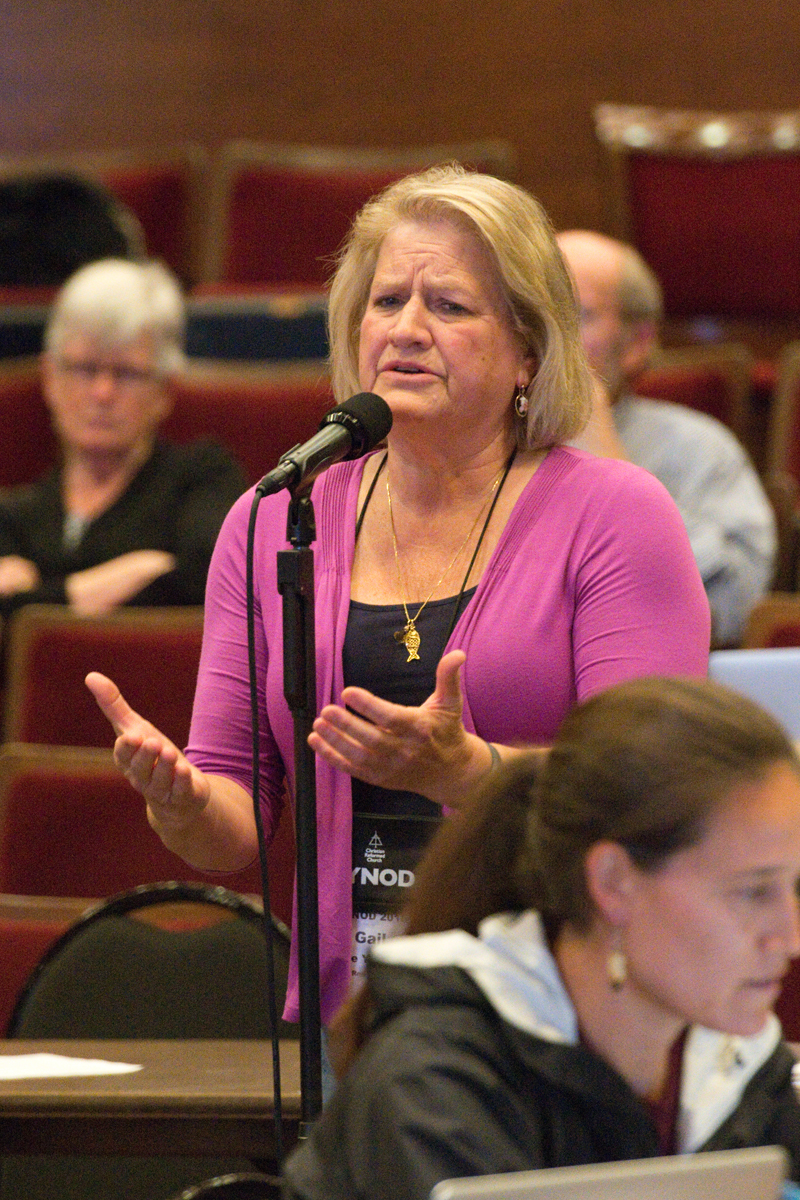 Gail De Young, Classis Red Mesa: People from Red Mesa asked her to please tell the stories of love and grace and goodness that have happened in Rehoboth and Zuni Christian schools.

Synod 2016 responded to a study report on the Doctrine of Discovery by labelling the doctrine as heresy and lamenting the pain it has caused.

The 68-page report mandated by Synod 2012 describes attempts by European colonizers to choke out indigenous cultures in North America, beginning with papal edicts during the 1500s and persisting in subtle ways to the present day.

In the 1800s and 1900s, many Native American children were sent to boarding schools, with the goal of assimilating them, the report states. Among those boarding schools was Rehoboth Christian School, a mission of the Christian Reformed Church.

Synod recognized and gave thanks for “the love and grace extended over many years by missionaries sent out by the CRCNA,” but also acknowledged the pain of those who suffered from experiences in boarding schools in the U.S. and Canada, including Rehoboth Christian School.

But delegates chose not to adopt most of the actions recommended by the report, such as forming a story-gathering commission, creating a denominational service of lament, or educating CRC members on the Doctrine of Discovery.

“With all respect to the task force, we felt that they had prescribed various actions without necessarily consulting with the Zuni and Navajo people,” said Daniel Zylstra, reporting for the advisory committee that studied the report.

“We felt that it was not right to be dictating a process to a people who do not feel that they have been consulted or engaged in determining that process.”

Task force member Mark Charles, who has both Dutch and Navajo heritage, said that the lack of consultation was partly because Native American boarding school survivors are hesitant to dig into their painful past.

“There are certain conversations we don’t know how to have,” Charles said. “There is a parental dynamic that exists because of the way that [boarding school students] were presented the gospel.”

Gail De Young, a delegate from Red Mesa, told synod that, “When people from Classis Red Mesa heard that I was coming to synod, over and over they said ‘Please tell the stories of love and grace and goodness that have happened in Rehoboth and Zuni Christian schools.’”

Darlene Litson, who is one of synod’s ethnic advisers, told delegates that her boarding school experience was very good. “I want to acknowledge the missionaries who came out to the Navajo reservation to bring gospel to our communities,” she said, weeping as she recited a list of Dutch surnames.

“Because they brought the gospel, salvation came to my grandparents’ house, my mother, my children, my grandchildren, so to God be the glory, and I thank God for them.”

Tim Toeset from Classis Yellowstone said that his 104-year-old uncle, who had worked at the school in Rehoboth, had read the committee’s report and “(it) pained him significantly because it demeaned his work, because it essentially said it wasn’t right. . . . We need to recognize that there’s pain there too.”

“In our research and listening we’ve learned that the Doctrine of Discovery influences us both historically and presently,” Hogeterp said.

“Many of us in North America live and worship on unceded land. We don’t like to hear these stories, but we drink downstream from them. We cannot change that brokenness today, but perhaps in truth-telling and lament as a first posture we can begin to reconcile.”

Melissa Van Dyk, a woman adviser to synod, suggested that synod was not going far enough “in acknowledging our personal and community response. We do need to acknowledge the cultural genocide that we have been part of and continue to be a part of.”

Synod delegates asked next year’s synod to consider calling for a Day of Justice in the CRC in order to lament racial injustices.