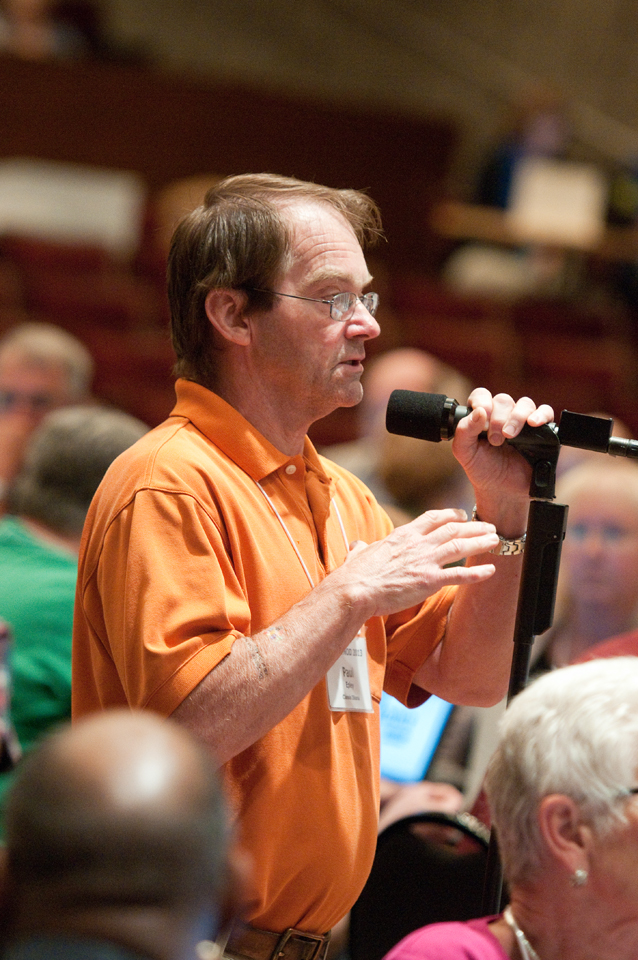 Elder Paul Epley, Classis Illiana: “Let’s slow it down and have a bigger discussion. I think we have a fuller, healthier church if we go that route.”

Synod 2013 took a first step toward revitalizing the office of deacon and giving deacons a broader role in the Christian Reformed Church.

Delegates proposed changes to the denomination’s Church Order that would see deacons join ministers and elders at the annual synod, as well as at meetings of classes - regional groups of churches. The proposals require adoption by a subsequent synod to take effect.

The recommendations came from a task force that was appointed by Synod 2010 to study the role of deacons. It produced a report to synod called Diakonia Remixed.

Many churches already send deacons to classis meetings, but deacons may not be delegated to synod, which is reserved for elders and ministers.

“[Having] deacons at major assemblies is a matter of full representation of the church,” said Andrew Ryskamp, director of World Renew-U.S. and an adviser to the task force.

Though considered equal to other officers, too often deacons are seen as “elders in training,” task force members said. Most are young, first-time office-holders assigned “simpler tasks of mercy and benevolence,” the study said.

“Is the office of deacon just to decide what offerings to take and counting money?” asked Rev. Bruce Persenaire, “or should they be involved, thinking about how to transform their communities?”

Rev. Peter Byma, Classis Pacific Northwest, praised making greater use of deacons' gifts, noting he once was one. He said a renewed diaconate could be a beautiful fit with the “Five Streams” of ministry priorities that Synod 2013 had approved earlier.

“I can get really excited about a classis meeting that develops those five streams and the (where) diaconate is present,” he said.

In a long and sometimes complicated debate, many delegates argued for further development of the role of deacons as well as delegating deacons to synod and classis meetings.

“This provides a welcoming position for churches with limited leadership to be at the meetings and have a voice.”

Others objected that the changes would increase classis delegates by a third, adding expense and a duty many deacons don’t want anyway.

“They want to be engaged in community,” said Rev. John Vanderburgh, Classis Lake Superior. “They don’t want another meeting.”

Others said churches should not be required to delegate deacons, but proposals to make it optional failed.

“Let’s slow it down and have a bigger discussion,” said elder delegate Paul Epley from Classis Illiana. “I think we have a fuller, healthier church if we go that route.”

The changes proposed this year will go to Synod 2015, and if adopted, would be implemented by Synod 2016.

Persenaire stressed that these proposals are a general direction. Before Synod 2015 will be asked to adopt the proposed changes, more study will be done on the respective roles of deacons and elders, their distinct tasks at major assemblies, and ways to revitalize both offices.

In the meantime, up to seven deacons will serve as advisers to Synods 2014 and 2015, functioning in a way similar to that of ethnic advisers and young adult representatives.