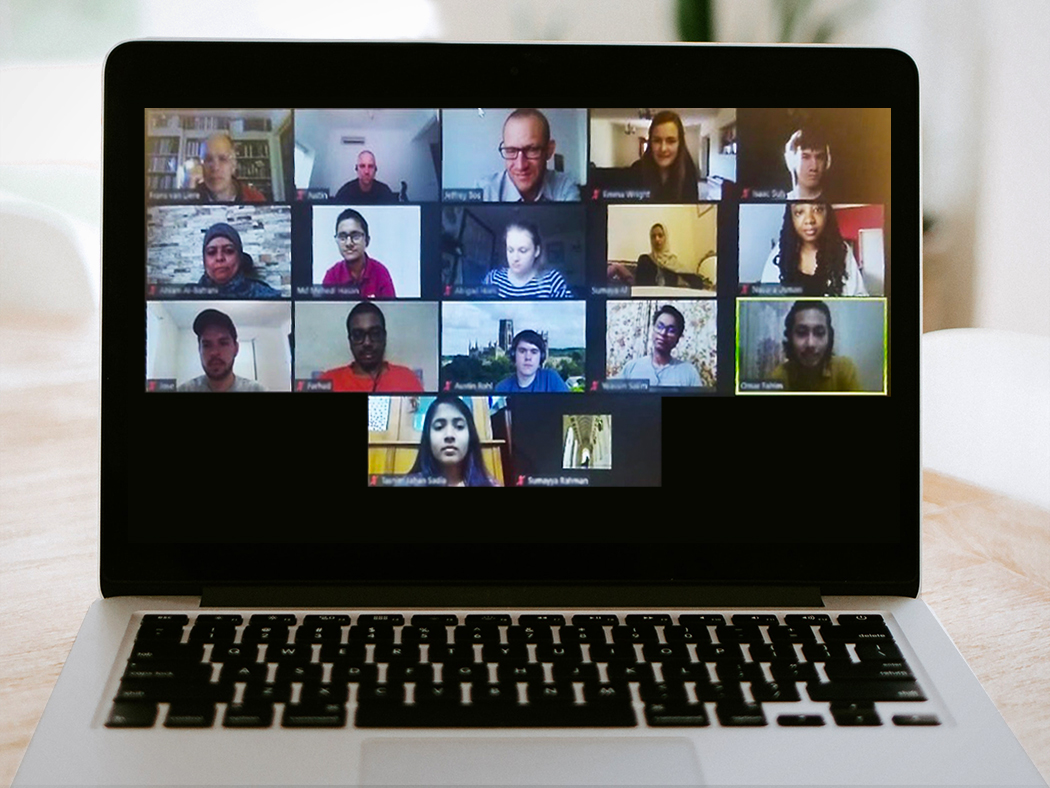 Recognizing the need for interpersonal and intercultural engagement, especially during this season of COVID-19, Calvin University professor of history Frans van Liere partnered with Al Amana Centre, a peace center based in Muscat, Oman, to develop an online Scriptural Reasoning course for students.

Scriptural Reasoning (SR) is a method of interfaith dialogue in which people of different faith traditions come together to read and discuss passages of their holy scriptures — namely the Torah, the New Testament, and the Qur’an.

As a volunteer for the Al Amana Centre, I took the course myself. In the process, I appreciated that the goal of SR is not to agree, debate, convert, or compromise one’s religious beliefs. Rather, the aim is to seek a deeper understanding of others’ texts and our own. In doing so, participants form stronger relationships across traditions.

In light of canceled study-abroad programs and stay-at-home orders during the Spring 2021 semester, this online SR course offered an opportunity for students to fulfill their cross-cultural course requirement at Calvin University and learn alongside a diverse group of Christians, Muslims, and Jews from the U.S, Oman, Bangladesh, and Palestine-Israel.

Van Liere described his vision for the course this way: “My idea was more ambitious than just teaching about Islam: I wanted to bring students into contact with Muslims. I believe in interfaith dialogue as an interpersonal event, not a theoretical discussion about elusive theological truth.”

Many Calvin University students, coming from predominantly Christian backgrounds and a range of interdisciplinary fields, had little to no experience with interfaith dialogue and limited knowledge of Islam.

At the beginning of the semester, some students were wary—conversations about religion can be awkward or contentious. However, as the weeks went on, students grew increasingly comfortable, discovering the laid-back and respectful atmosphere SR creates for dialogue.

“I was incredibly nervous because I have never had full-length discussions about religion with people who disagree with me,” said Anthony, a Calvin University student. “However, from the first session, I could tell that it was not as stressful as I thought it would be. It was much more of a free discussion than the debate I expected.”

“Everyone was encouraging of one another,” commented Sara, another Calvin student. “This did not mean that everyone agreed, but I learned that it was possible for people to sit down and simply talk — and that was very refreshing.”

Because SR is rooted in sharing scriptural texts rather than imposing ideas, I saw that these meetings became an open space for collective discovery and mutual appreciation. Recognizing that these texts are sacred to a member of the group fosters a certain level of respect. A shared passion for scriptures brings participants together.

Participants enter these conversations with a spirit of curiosity and humility, as they are not answering on behalf of their tradition or imparting an absolute truth.

Jeffrey Bos, director of programs at Al Amana Centre, which is a ministry of the Reformed Church in America, said that in the exercise of scriptural reasoning “we explore, we are open, we are honest.”

I came to see that there is beauty in diversity of thought and in open discussions that shine light on truth from different angles.

In the words of St. Augustine, “For what could God have more generously and abundantly provided in the divine writings than that the same words might be understood in various ways.”

We are all asking the same existential questions, I came to see, and are connected in our love for God and our journey to seek truth. SR is one way we can explore our beliefs, journeying alongside our neighbors of other faiths. Exposure to outside perspectives leads us to learn more about our own scriptures or to see them in a new light. SR encourages deep thinking and makes us mindful of how we respond.

“In these sessions, I was able to hear some of my core beliefs being directly challenged in a way that begged for me to do more critical thinking and not just become defensive,” Jack, a Calvin student, said.

Another Calvin student, Meghan, discovered, “It is less about knowing and more about learning.”

Students also found that hearing personal insights from Muslims directly challenged preconceptions or false notions they had gathered from the media or other outside sources.

“I have a new perspective on unfair stereotypes,” Meghan said, “and I have grown in my appreciation for others and their beliefs.”

Jack reflected, “I no longer believe that Christianity and Islam are diametrically opposed ideologies, but instead believe that they’re two very closely related and intricate belief systems. They share some of the same history and figures, yet still find themselves different enough to create such fascinating discourse.”

Constructive SR conversations and closer interfaith relationships go hand in hand. When monologue is replaced with dialogue, we remember that the heart of religion is relational.

“I always emphasize that dialogue happens between people, not between religions, and SR makes that possible,” said van Liere.

Looking back on the course, Jack said, “I believe the most constructive thing would be for everyone to just find a friend. The interview I did with my Muslim friend taught me so much about him. I have a completely new respect for both him and his beliefs.”

Though students were first introduced to SR in a virtual classroom setting, for many, the impact of these conversations sparked a commitment to continued learning and engagement with their Muslim neighbors.

“My desire to learn has just begun,” Sara reflected. “I have a much more willing spirit to learn, respect, and understand those who are different from me. Not only will it help me build a relationship with them, but also with my Lord and Savior, Jesus Christ.”

If you are interested in joining an online SR group or want to form a group to be facilitated by Al Amana staff, you can reach out to Jeffrey Bos at the Al Amana Centre at [email protected].