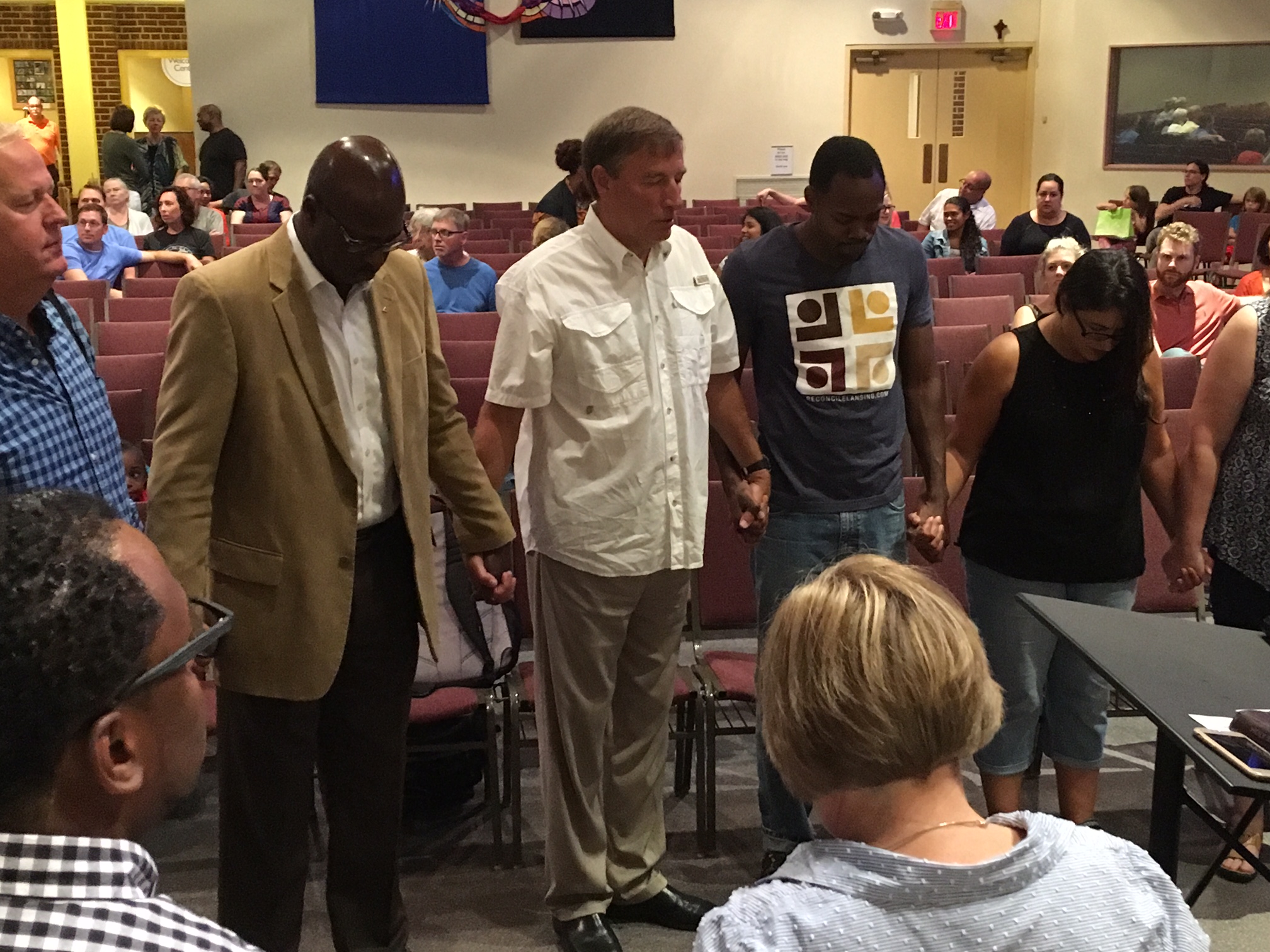 Colin P. Watson Sr. (left in tan jacket) prays with others during a service for Charlottesville, Virginia.

In response to recent events involving a rally of white supremacists in Charlottesville, Virginia and the violence and deaths that followed, the Christian Reformed Church has released a statement from Colin P. Watson Sr., director of Ministries and Administration, that calls Christians to love, repentance and prayer.

The Bible says, “The tongue has the power of life and death, and those who love it will eat its fruit” (Prov. 18:21).

On Friday night my wife and I watched in horror as a coalition of white supremacists, the Ku Klux Klan, and alt-right groups marched in Charlottesville, Va., to protest the removal of a Confederate statue from the public square. Young white men, fearful of being subservient to immigrants, Muslims, black men and women, and those who don’t look like them, took to the streets with Tiki torches, chanting “Blood and soil,” “One people, one nation, end immigration,” and other slogans.

This story is particularly poignant for us, since last week our daughter Allison and her husband, Kirk, moved to Charlottesville so that she can begin to study for her MBA at the University of Virginia in Charlottesville.

There’s an old saying that “Sticks and stones may break my bones, but words will never hurt me.” The Bible shows unequivocally that this statement is false: “The tongue has the power of life and death, and those who love it will eat its fruit” (Prov. 18:21).

The biblical truth of this statement became painfully clear when, during the day on Saturday, the white supremacy groups continued to march toward an inevitable altercation with those who felt otherwise. They soon engaged in violence with their detractors and the police.

Saturday afternoon, our worst fears were realized when a member of the white supremacist group drove a high-powered sports car into a group of individuals whose only crime was to hold a counter-demonstration, which declared that we must live together in love. One person died in the attack, and 19 others were injured. Two law enforcement officers also died in a helicopter crash while trying to lend assistance to officers on the ground.

What does the Bible have to say in situations like this?

We are called to love and to lift up each other, in deed and in word.

The response to this horrific incident laid bare the divide that still exists in this country. Oppression and injustice are alive and well. The aftermath of the violence was telling.

Some people forcefully and unequivocally condemned the action, drawing a straight line from words of hate to the inevitable results of pain and death. This is a biblical response.

Some others did not react in the same way, and they sought to justify or normalize these actions as being societal, presenting no reason for condemnation of particular groups. This is sinful!

As Christians, our choice is clear: we are called to love each other, as God has loved us. This is not an option. This is a command. The Bible also says that those who love are of God, but those who do not love are not of God, because God is love (1 John 4:7-8).

There are opportunities for us to pray and rally today. . . . to lift up our pain and sorrow to God, to pray for healing for those who have been hurt, and to pray for peace to reign in Charlottesville, and in our nation as a whole.

May the God of love have mercy on us all.