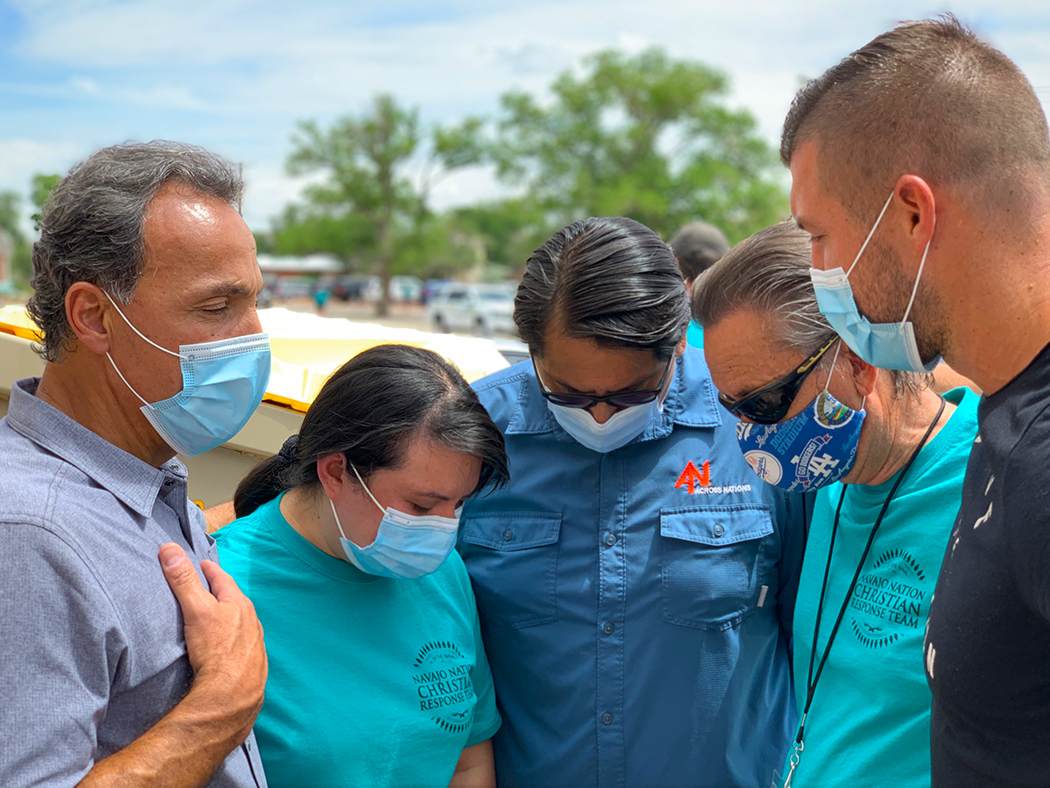 A year ago, the COVID-19 virus was sweeping through the Navajo Nation in New Mexico, Arizona, and Utah, causing a flood of people to seek medical care.

As the pandemic took hold, the numbers of people who were sick and dying climbed. The virus spread from home to home and from family to family on this huge reservation where the desert can seem to stretch forever amid boulders, rocky bluffs and twisted cacti.

Responding as best they could, doctors, nurses, and other medical personnel worked many hours to treat the growing number of sick people filling hospitals on and off the reservation.

Patients were put on ventilators, and people struggled against the disease in such numbers that, last May, the Navajo Nation — which has a population of about 300,000 people living on the reservation — had the highest infection rate per capita than any other community in the United States. Cases surged again in November and December.

But recently there seems to be some light at the end of a very long tunnel.

According to the Navajo Times, 87.8 percent of the eligible population — or more than 8 out of 10 people — had received at least one dose of  a vaccination as of Friday, April 23, and 38 percent had been fully vaccinated. This outpaces the national rate for vaccination which is just under 30 percent.

“There is some very positive news regarding the COVID-19 infectious rate here on the Navajo Nation,” wrote Stanley Jim, pastor of Window Rock (Ariz.) Christian Reformed Church, in an email he sent to church leaders on Thursday, Apr. 22.

“As of yesterday, there have been no COVID deaths reported for 10 consecutive days . . . . So, we, the Navajo Nation, are doing great.”

While people need to remain cautious and still follow prevention protocols, widespread vaccinations on the reservation and the decreasing spread of the virus are bringing rays of hope, said Jim.

A Sense of Relief

As infections have eased, things have opened up. For instance, churches were able this past Sunday to open to 25 percent of their capacity.

“We were closed for exactly 52 weeks,” said John Greydanus, pastor of Bethel CRC in Shiprock, N.Mex. “Soon we might be able to go up to 50 percent [capacity], depending on how many people are getting vaccinated.”

His church may have been closed for a year, but that doesn’t mean Greydanus hasn’t been busy. He said he’s been busier than he has ever been in his many years of ministry.

For one thing, he has made sure to offer church members an online service every Sunday, even if it was only him giving the sermon and family members playing music.

Then, given that many of his church members don’t have an internet connection, he has put together each week a bulletin that includes his sermon, and he has driven many miles down dusty bumpy roads to drop the bulletins off at the homes of about 50 church members.

“I’ve felt a little bit like the Lone Ranger, but the work has been very fulfilling — and I keep busy, taking it from one day to the next,” said Greydanus.

Another thing keeping him busy has been an expansion of the church’s food bank, with the help of a $5,000 World Renew grant and $8,000 from a father and son who raised money throughout their community in Minnesota.

Greydanus said they used the money to buy food and other items that people on the reservation needed. From early in the pandemic, he and several others packed food and distributed it to 800 to 1,000 people every week who drove up to receive it.

“We have been a hub,” said Greydanus. “Our church is located on the main highways leading into three other states [Arizona, Utah, and Colorado]. People have been happy with being able to come here for supplies.”

A grant from the CRC helped Greydanus purchase and distribute plants for people to use in their gardens and for flowers. And again, the pastor has hopped into his vehicle numerous times to drop the plants off to church members.

People have suffered here over the past year, but they have also banded together in various ways to make it through, said Greydanus.

“Right now people are doing what they are supposed to do. I hope we’ll soon be out of the woods. Things are opening up,” he said.

Not long ago, Rehoboth Christian School, just outside Gallup, N.Mex., was able to open to students for four days of in-person classes per week. This was a happy change for Bob Ippel, executive director of the school.

“Everyone has gone through some kind of upheaval over the past year,” said Ippel. “It has been so painful watching people go through such hard times.”

However, the school never closed; it remained a haven for giving out food and sharing resources as well as for classes both online and in person when possible.

Now, said Ippel, “we are seeing an extremely high rate of vaccinations, which is making a difference. I hope we are getting to the other side of [the pandemic].”

Listening to students talking and laughing in the hallways these days has been a blessing to his ears, he said. And watching students playing outside with their masks on has been awesome, said Ippel.

During the pandemic, Rehoboth Christian School teachers went extra miles to connect with students in their homes when they couldn’t get out. For instance, the teachers delivered flash drives with school assignments for students who had no internet.

But, said Ippel, “we’ve cried a lot together and encouraged one another” through the pandemic.

Being in the classroom again with students, as well as being able to meet with them one by one, has been a joy for Daniel Ensign, a school counselor at Rehoboth.

At the same time, though, Ensign said, he and his family have faced serious challenges over the past year. When his wife had to go to the hospital to deliver their second child, he was battling COVID-19.

“I was knocked flat,” he said. “It was tough even getting up.”

Their newborn had to stay in the hospital and was given oxygen for a time, but the child is doing better now, he said.

He added that during the time he took to recover, and even though he still experiences some symptoms, the people at Rehoboth Christian School have shown strong support for him.

At first, when the students were coming back to school for only a day or two, they were glum and hardly interacted with one another, he said.

“It was dead quiet, with a little murmuring, like they had forgotten how to socialize,” said Ensign. “But now that they are back for four days a week, they are joking around and getting back into the swing of things.”

Ensign said he anticipates that some hard times are ahead as he begins working with students to help them deal with grief and loss coming from the challenges of the pandemic. “But I look forward to finally helping kids process things,” he said.

Working at Rehoboth through what felt “like an impossible situation” gave him hope, he said. “There is a vibe here of community, of relying on God and prayer with what to do next,” said Ensign.

Caring for the Elders

Working in a Gallup-area nursing home during the pandemic has been a brutal experience for Sheena Isaacson. “It has hit me pretty hard to be taking care of the elders. It has flipped our world upside down. We’ve lost some patients during this pandemic,” she said.

But through it all she has been grateful to have enrolled her son at Rehoboth — a place that has been like solid ground, a dependable place that cares for students, she said.

“Educationally it’s been outstanding. I can’t express enough gratitude for it,” she said.

At Christmastime, the Rehoboth choir sang carols outside, she recalled. Standing there and listening offered a welcome time of normalcy, she said: “It was so nice to experience that.”

Bob Ippel recalled attending the annual Easter sunrise service at the Rehoboth cemetery. Everyone gathers on a large rock — Resurrection Rock — for the service, he said.

It hurt deeply, said Ippel, to look out over the gravestones, row upon row of them bearing the names of many people he has known. Several of them were freshly dug graves, reminding him of the toll the pandemic has taken.

“This past year has been like no other,” said Ippel. “In school, what we taught became a lot less important than connecting with the kids. Teachers had to take on the role of pastors, counselors, shepherds. Life changed bigtime.”

However, standing on Resurrection Rock, he said, helped him think of how we have “resurrection courage. We dig our feet into the soil and face our grief because we also know that victory has been won for us so many years ago.”