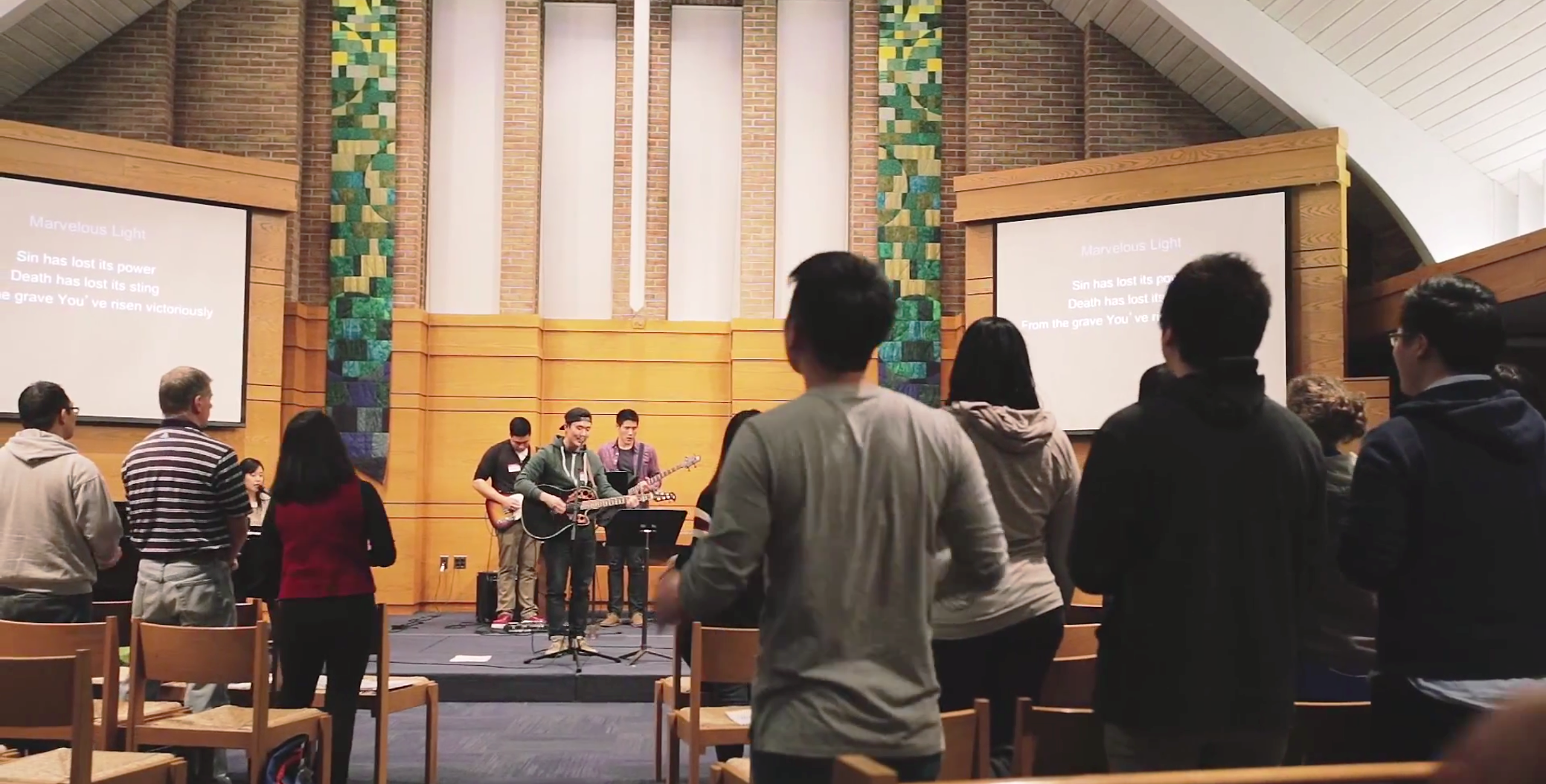 As the service progressed, a lively praise band played music and  members joined in saying the Apostle’s Creed for the Confession of Faith.

Then Pastor Josiah Chung gave the sermon based on Nehemiah 4, which addresses the problems the Jewish people faced as they rebuilt the walls of Jerusalem.

“We are a fledgling church birthed out of a Korean context, but we are working to move forward beyond that,” said Chung, whose congregation meets in the Woodlawn Ministries Center across from Calvin.

Living Water is one of a growing number of so-called second-generation Korean CRC congregations, which began as a way to meet the spiritual needs of  the sons and daughters of parents who came to the U.S. from Korea a generation or so ago and started churches.

The number of these congregations is small; some have been doing ministry for years, while others, such as Living Water, are new. Some focus just on Korean young people; others are more broad. Some started and have closed.

But churches such as these are the wave of the future for the CRC, said Charles Kim, coordinator of Korean ministries for Christian Reformed Home Missions.

“This has to keep happening and the denomination has to be strategic and intentional in supporting the growth of these churches,” said Kim.

The growth of second-generation congregations — many which have been funded by Home Missions -- mirrors what happened in the early decades of the CRC when Dutch immigrants started churches and held services in their own language, said Kim.

After a time, the young people in these churches became more acclimated to the culture and started their own congregations, offering the worship in English and incorporating styles of music more relevant to their lives.

“But this doesn’t mean first-generation churches no longer have a role to play,” said Kim. “These churches have meant and continue to mean a great deal to their members. Some of the churches still speak only Korean; others also offer English.”

Korean CRCs, in fact, are the fastest growing group in the CRC. There are a total of about 110 Korean churches; maybe 20 of them can be categorized as second-generation churches, said David Koll, director of candidacy for the CRC.

“We had many courageous leaders who began Korean congregations in the CRC, and now we also have strong, younger leaders who are pastoring churches for the newer generation.”

Rev. Jae Park, pastor of Grace Community Chapel, which now has three campuses in New Jersey, is one of those leaders. The church began about 10 years ago as a ministry with mostly Korean students attending Rutgers University in New Brunswick, N.J.

But often these students, said Park. couldn’t find a church to meet their needs and drifted away from attending services.

“They started disappearing and I wanted to plant a church where second-generation — or the ‘lost’ generation — could go,” said Park, who grew up in New York City.

Bringing them back to church wasn’t easy, since these young people — as young people elsewhere in the culture — tend to be “very self-absorbed and self-oriented,” said Park.

But by working to provide ministries in English, music that mattered to them and Bible teaching that was deeply Reformed and yet accessible, the church near Rutgers grew.

Then, as the initial church members moved into jobs across the area, Grace Community Chapel founded the two new campuses, said Park.

As they have grown, said Park, they have attracted other Asians as well as others from New Jersey neighborhoods.

“Many churches such as ours have come and gone, but we fortunately to have been able to maintain a presence in the area,” he said.

When he began Good News Chapel in Walnut, Calif. 13 years ago, Han was connected to a large, Korean-language congregation.

“We are grateful for that church,” said Han. “It made it possible for Good News Chapel to exist and serve to be a bridge for this generation of children of first-generation Korean parents.”

Located about 30 minutes from South Los Angeles, they were able to launch a new, independent church in 2012, said Han.

Today, they lease space in an office building for administration and rent space at a high school for Sunday services.

“Our worship is very upbeat. We’re not too high on liturgy,” said Han. “We are mindful of unbelievers; we are very missional and outreach-oriented to all of the people in our community.”

At the same time, he said, “we aren’t apologetic that we look Asian. But being Korean doesn’t define us primarily. We are attracting members from different groups.”

David Sung, who has pastored various second-generation churches in different settings, said it is important for churches as they reach out to young people to keep strong connections to the past.

Some second-generation churches try to make a break. But, in so doing, they can cut themselves off from a rich tradition — especially of traditional Korean prayer — that sustained and defined the churches of their parents.

“It is important for churches to think deeply about being intimately connected to their spiritual heritage,” said Sung, who is pastor of Ann Arbor Hope Church, which primarily ministers to Korean students at the University of Michigan.

“We want to be give the Reformed heritage to the next generation. We need to pass along the heritage God has given us to the Korean-American church.”

Josiah Chung at Living Water worked for a time providing an English ministry at a large Korean-speaking congregation in Grand Rapids.

With the new church, he said, he is trying to honor the past while at the same time offering ministry to younger Christians, be they Asian or from other ethnic groups.

“The question is ‘what do we hold onto and what do we let go?’ We need to be constantly doing that,” he said. “We want diversity to be one of the principle kingdom values we are celebrating.”