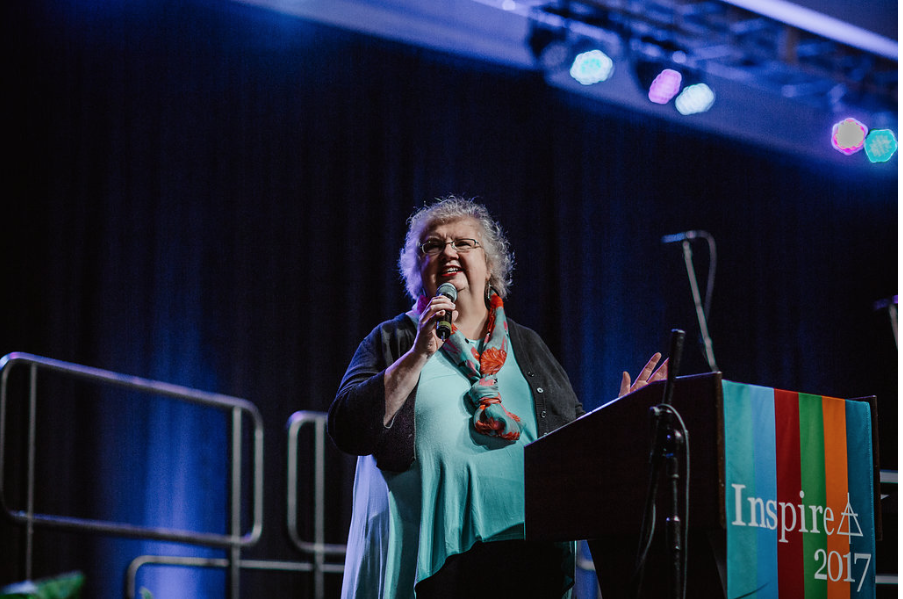 Liz Curtis Higgs, once known as “The Detroit Lady of Rock”

Imagine shock disc jockey Howard Stern being the one who told you that you needed to turn your life around, best-selling author Liz Curtis Higgs told Inspire 2017 participants on Thursday, Aug. 4.

Higgs, then known as the “Detroit Lady of Rock,” was working as a DJ in the late 1970s at the same Detroit radio station where now national talk-show host Stern was also spinning records.

“As a radio personality, I traveled from town to town, up and down the dial through my twenties, including at the station in Detroit where Howard Stern did mornings and I did the afternoon show,” said Higgs, who stepped in to speak for writer Ann Voskamp, who was ill and couldn’t attend the gathering of Christian Reformed Church ministry leaders from across the denomination.

“As a one-sentence summary of how low my values had plummeted, even Howard once shook his head and said, ‘Liz, you’ve got to clean up your act!’”

Even he saw that it “wasn’t my on-air show that was in trouble; it was my risky off-air escapades that needed changing,” she explained.

By the fall of 1981, Higgs said, she found herself in Louisville, Ky., at an AM oldies station and facing the hard truth that her world was falling part.

Into the midst of this personal chaos, said Higgs, came two new Christians who on their enthusiasm for their fresh faith introduced her to the Bible and eventually brought her to church, where she quickly found a home. She joined the choir, gave her life to Christ, and has rarely looked back since, she said.

“I’ve come from glory to glory,” said Higgs, author of such books as Embrace Grace, Bad Girls of the Bible, and Mine is the Night.

“I’ve learned that God wants us to pray hard, do the work, love others — and he will welcome us like the father did his prodigal son,” she added.

In her presentation, which followed morning worship, Higgs elaborated on Luke 15:11-32, the story of a son who asked his father for his inheritance and then went off to a far land where he spent it all on wanton living.

“Some of us have been in the far country, which is not a happy place,” said Higgs.

Once the prodigal son had spent his inheritance, she noted, things got even worse for him because the country itself was hit by a severe famine, leaving him with nothing.

“The whole country ran out of food, and the son had to hire himself out to feed pigs,” said Higgs. “He had to work among pigs, animals that the people of Israel considered unclean.”

Higgs said she identifies with that wayward son, given that she was living “in a pig pen” herself for many years before she met the two believers who led her to a new life.

Have you ever been there — in the pit and with no place to turn? Higgs then asked.

For the prodigal son, she said, he had a choice when he hit bottom — as do we all.

In his case, he decided to return home — and this, said Higgs, is the amazing part of the parable, the part that shows that the father is the real hero of the story.

All along, ever since his son left, the father was waiting, looking every day for his son’s return. On his return home, the son was rehearsing his words, finding ways to tell his father how sorry he was for taking and wasting his inheritance, said Higgs.

But he need not have worried. His father spied him from far off and, “filled with compassion,” ran out to greet his wayward son. “When he reached him, his father threw his arms around him and reclaimed this son as his own,” said Higgs.

Then the son offered up his speech: “Father I have sinned against heaven and before you; I am no longer worthy to be called your son.”

The father waved this aside and ordered his servants to bring the best robe to wrap around his son, slip a ring on his finger, put sandals on his feet, and prepare a feast, saying, “This son of mine was lost and is found!”

“I spent 10 years in that far country. I went haywire in the 1970s — drinking, smoking pot, doing speed and cocaine,” said Higgs.

But only after she reached the end of her rope, only after the grace of God showed in the form of those two new Christians, was she able to make the turn.

Of special interest, she added, was that those two women who discipled her did it carefully and lovingly and without trying to shame her.

“Think of this when you have others in your life who are struggling,” said Higgs. “I know it is hard to watch those you love be there in the pit. But don’t judge them; only love them.”

Important to remember, she added, is that God, like the prodigal son’s father, waits “until we are ready to come to our senses. We may not be able to see God, or hear God, but our beloved God is there to wake us up and help us come back to ourselves.”