A Prize-Winning Career of Connecting Faith and Philosophy 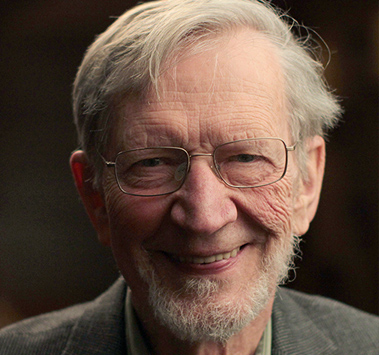 In many ways, says renowned philosopher Alvin Plantinga, his sense of God’ sovereignty  hasn’t changed substantially since he was growing up and attending a Christian Reformed church in North Dakota in the 1930s and ’40s.

Relying on this bedrock belief that God is the creator and guiding force of the universe, Plantinga went on to make a career of asking hard questions and stating the case for the existence of God. In doing so, he has won many awards, most recently the 2017 Templeton Prize.

“I believe in what John Calvin calls the sensus divinitatis — that we are born with an innate tendency or disposition to believe in God,” said Plantinga, who will receive this year’s Templeton Prize, which comes with an award of $1.4 million, at a ceremony next month at the Field Museum in Chicago.

“The vast majority of people are religious in one way or another. This is very much ingrained in humans,” said Plantinga, 85.

In his early teens, Plantinga was introduced to philosophy by his father, a professor of philosophy, who read Plato to him, and his faith was established as he absorbed worship services and lessons at the local church.

Along with the influence of his father and others, Plantinga decided soon after starting college that he wanted to be a philosopher and devote his time to trying to describe God in rational, analytical terms in a discipline that at that time had little room for a Christian perspective.

“Sometimes ideas come along that revolutionize the way we think, and those who create such breakthrough discoveries are the people we honor with the Templeton Prize,” said Heather Templeton Dill, president of the John Templeton Foundation, which awards the prize.

“Alvin Plantinga recognized that not only did religious belief not conflict with serious philosophical work, but that it could make crucial contributions to addressing perennial problems in philosophy.”

These days, as he lives in retirement in Grand Rapids, Plantinga recalls what it was like when he landed his first teaching job as a philosophy professor in the mid 1950s at Wayne State University in Detroit, Mich.

“It was a challenge,” said Plantinga, who attended Calvin College as an undergraduate and earned his Ph.D. in 1958 from Yale University. “My colleagues were extremely able philosophers, but they were also atheists. They were good friends, but there was also a certain amount of tension.”

That wasn’t the case when he accepted a teaching position in 1963 at Calvin College, where philosophers such as Nicholas Wolterstorff and Richard Mouw began to bring the study of Christian philosophy into the mainstream.

Basing their work on the foundations laid at Calvin by philosophers Harry Jellema and Henry Stob, Plantinga and the others pushed into the field and gained respect as they taught and wrote about looking at philosophy through the eyes of faith. Along with other philosophers, they made the existence of God something that could be thought through, argued, and made reasonable through logic.

Together they caused an important shift in the world of philosophy. Although still dominated by atheists and agnostics, this area of study became an important focus of study and in the process helped to change the way the evangelical church could integrate theology with philosophy.

Plantinga left Calvin in 1982 to teach at the University of Notre Dame. In 1984, he published “Advice to a Christian Philosopher,” a paper that has helped to shape the field ever since.

In it he wrote, “Christianity, these days, and in our part of the world, is on the move. There are many signs pointing in this direction: the growth of Christian schools, of the serious conservative Christian denominations, the furor over prayer in public schools, the creationism/evolution controversy, and others.”

And, he went on, “There is also powerful evidence for this contention in philosophy. Thirty or thirty-five years ago, the public temper of mainline establishment philosophy in the English speaking world was deeply non-Christian. Few establishment philosophers were Christian; even fewer were willing to admit in public that they were, and still fewer thought of their being Christian as making a real difference to their practice as philosophers.”

The most popular question of philosophical theology, at that time, was not whether Christianity or the existence of God is true. “The question, instead, was whether it even makes sense to say that there is such a person as god,” he wrote.

Plantinga said he gets frequent emails from pastors who tell him how influential his works in such books as God and Other Minds and Warranted Christian Belief have been for them in their ministry -- for instance, helping them to grapple with and better understand and explain aspects of God’s work in the world and as described in the Bible.

He also said he has heard from people, including college students, who were able to embrace the Christian faith “after they came across some of my stuff.”

Plantinga takes readers through the thoughts of others such as Socrates and Calvin and Thomas Aquinas and expands on them to argue that believing in God, in a world plagued by evil, makes sense.

But there is something else, at least for him, that goes beyond the rational, beyond simply making things make sense.

For instance, Plantinga said, while he was a freshman at Harvard University before transferring to study at Calvin College, he was walking across the campus “on a dark, rainy November evening, and suddenly it seemed like the whole sky lit up.”

Looking up, he said, as stated in an interview in The Chimes, Calvin College’s student newspaper, “somehow it just seemed obvious that the Christian story was true. After that I still got involved in various arguments and discussions, but they never seemed all that real to me.”

When he learned in late April that he had won the Templeton Award, Plantinga said he was “flabbergasted” and yet grateful. The money, he said, is nice, but the validation for his work is truly satisfying.

“My main thing has been to represent Christian belief in the world of philosophy and to keep doing it as I’ve fended off attacks on my ideas,” he said.

Plantinga retired as the John A. O’Brien Professor of Philosophy Emeritus at the University of Notre Dame in 2010. After that, he continued writing about the connections between science and Christianity.

But now, he said, he believes his philosophizing days, at least academically, are now behind him. He likes retirement and the chance to spend more time with his family.

“I’ve done pretty much what I wanted,” he said. “I don’t think I have anything else to say.”

The Templeton Prize, valued at about $1.4 million, is one of the world's largest annual awards given to an individual and “honors a living person who has made an exceptional contribution to affirming life’s spiritual dimension, whether through insight, discovery, or practical works” (templetonprize.org). Plantinga joins a group of 46 prize recipients including Mother Teresa, Archbishop Desmond Tutu, and the Dalai Lama. A video of Alvin Plantinga, a video of Heather Templeton Dill announcing the 2017 Templeton Prize, and videos of Plantinga from the PBS television series “Closer to Truth” are available atwww.templetonprize.org.