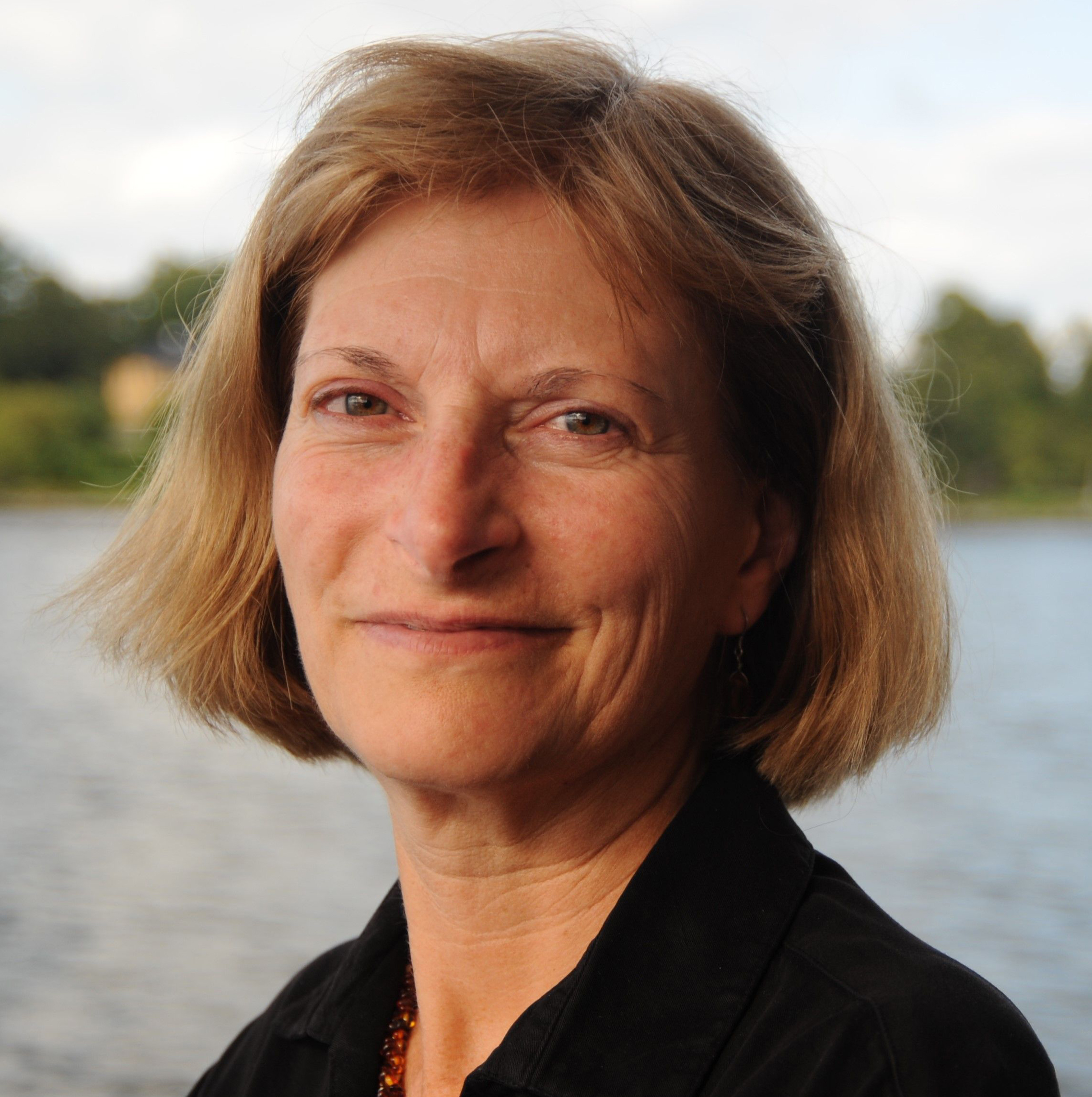 The iconic “Earthrise” photo, taken as the Apollo 8 spacecraft circled the moon in December 1968, shows a fragile-looking blue and white Earth.

With its banks of clouds and blue oceans, that image changed “our thinking about the planet we live on and share,” said Sandra Postel, an author and leading authority on international water issues at the January Series 2020.

“Suddenly we saw our Earth, our home, as a gem of blue and white — a circle in the darkness of space,” said Postel in a presentation titled “Replenish: The Virtuous Cycle of Water and Prosperity.” This is also the title of a book she published in 2017.

Her January Series talk was held in the Covenant Fine Arts Center at Calvin University on Friday, Jan. 10. The January Series runs every weekday from 12:30 p.m. to 1:30 p.m. (EST) through Jan. 28. The presentations are available live at more than 60 remote webcast locations. The series is also streamed with audio only at 12:30 p.m. EST.

Presenters include Alice Marie Johnson, who will speak Jan. 20 on “After Life: My Journey from Incarceration to Freedom”; author, columnist, radio host, and philanthropist Mitch Albom, Jan. 21; and Ann Compton, Jan. 22, speaking on her 41 years in the White House press corps.

Seeing Earth from space, said Postel, we were able to realize how so much of our planet is made up of blue oceans. “We are incredibly lucky to live on our water-filled planet,” she said. “But a very small percentage of that is fresh water, which is necessary for growing food and drinking” and sustaining life.

In her talk, Postel spoke about worldwide challenges to fresh water and the prevalence of droughts, as well as innovative ways — some of which she has been involved with — to help address the challenges of depleted water supplies.

One challenge she mentioned is something worth considering the next time we buy clothing or fast food. “It takes 700 gallons of water to make one cotton shirt,” she said. “It takes more than 300 gallons for a pizza. Most of that comes from growing the tomatoes and basil and making the cheese.”

Formerly a Freshwater Fellow of the National Geographic Society, Postel is also the author of Pillar of Sand: Can the Irrigation Miracle Last?and Last Oasis: Facing Water Scarcity.

Beyond its use in making clothes and food, water is being depleted in many other ways, said Postel, ranging from manufacturing to getting rid of debris and waste and from helping to create energy to clearing land to put up homes and businesses.

“There are a lot of signs of depletion of ground water all over the world,” she said. For instance, because of Soviet irrigation projects, the Aral Sea in Kazakhstan, the fourth largest lake in the world, has been drying up over the past 30 years.

Rivers such as the Colorado River are also drying up, largely as a result of the construction of nearly 60,000 large dams across the world since the Hoover Dam opened in Nevada in 1936.

“We have been building, on average, two dams a day” across our planet in recent years, she said.

While these dams provide power and water for agriculture and countless communities, they also divert much-needed water  from wildlife and birds, and they wipe out wetlands.

“We have lost 50 percent of the world’s wetlands, which are ecosystems that have provided great functions to our society. They store water and regulate floods,” said Postel. “But it is so easy to drain a wetland and put in a shopping mall.”

Clean water supplies across the world are in danger. Two years ago, the city of Capetown in South Africa nearly had to turn off its water supply because of a prolonged drought, itself the result of climate change, that had dried up the local reservoirs. Fortunately, said Postel, rain came to Capetown “in the nick of time. But it was a wakeup call to cities around the world.”

Postel is founder and director of the Global Water Policy Project. She is also a cocreator of Change the Course, a national water stewardship initiative awarded the 2017 U.S. Water Prize for restoring billions of gallons of water to depleted rivers and wetlands.

As a leader of Change the Course, she has helped in restoring water to rivers and wetlands by taking part in dozens of projects that require a different way of thinking from that used when  water systems and projects were built earlier, she said.

“We need to increase the value of water by perhaps moving it to other areas that need it. We also need to shrink our water footprint and consider how we can replenish water from where it has been taken.”

Change the Course was launched in 2012 by the National Geographic Society and others to undertake water restoration projects. They have worked in the Colorado River Basin, restoring over 4 billion gallons of water “to depleted ecosystems from the river’s headwaters in the Colorado Rockies to the delta in Mexico,” she said.

“We have worked side by side with many communities to figure out ways to have a healthy economy and agriculture and healthy rivers.”

In the Verde River of north-central Arizona, for example, they have partnered with farmers to install solar-powered, automated head gates on existing irrigation ditches that have been used for many years.

“At first, the irrigators didn’t like this, but they listened and learned how the system worked. The headgates are controlled by the irrigators to only take out the water they need,” said Postel. “Before this, they had no way to measure the amount they were taking out.”

Previously, the Verde River would dry up during the irrigation season. But now the river flows abundantly,  allowing people to use it again for boating and fishing and other forms of recreation during the once-dry periods.

“It took . . . innovation and a willingness to trust” to make the plan work, she said. “The Verde River is now a poster child for river restoration.”

Elsewhere in the U.S., New York City has an innovative program in which it uses a series of wetlands and forested areas to filter its drinking water, instead of putting the water through a filtration plant. Los Angeles has also now pledged to cut its water usage in half in coming years.

In China, officials are building “sponge cities” that manage water by the expansion of wetlands, creation of artificial ponds, and construction of permeable pavement that can absorb water.

“There is a lot we can do to make a difference,” said Postel. “But we need to talk about stewardship and what it means. We need to create a water ethic. We need to be able to provide all living things with enough water.”