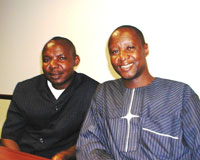 A 6 peace agreement, brokered with help from the Christian Reformed Church in North America, continues to help bring stability and hope to the tribal people living in Takum, Nigeria, African church leaders say.

“We can now move around Takum better. There are dividends to the people and there are improvements that we can see,” said Rev. Tsojon Ykubu, general secretary of the Christian Reformed Church of Nigeria.

At the same time, conflict continues between ethnic groups in Takum, which is in Central Nigeria. As a result, continued work at maintaining peace and working toward reconciliation is necessary, said the Nigerian church leaders who are in Grand Rapids, Mich., to attend Synod 2008 of the CRCNA.

“We need to take one step at a time. The church is still trying to help bring about peace,” said Rev. IraRiman Mathias, general secretary of the Reformed Church of Christ in Nigeria.

A peace and reconciliation committee, of which both churches are members, continues to meet to work with tribal leaders to deal with problems as they arise. "The issues are political. They are about who is in leadership. The latest crisis was the result of a conflict over farm land," said Mathais.

The church leaders plan to offer greetings and be available to answer questions during Synod 2008, which is meeting at Calvin College.

The Takum peace agreement ended a violent land dispute among ethnic groups that destabilized communities in Nigeria, displaced thousands of families and caused starvation and death throughout parts of the West African country.

Crucial in helping to forge a peace agreement was including community leaders from all over the Takum area in the discussions, said Van Houten. “It has been complex. There are so many different facets that play into this,” he said.

Van Houten joined the Nigeria church officials at the CRC’s office in Grand Rapids last week to give an update on the peace process.

The peace process has also touched the two churches whose leaders are attending Synod 2008. The RCCN broke from CRCN in the 1970s, but now they are working together in many ways.

"Our churches came together as the result of a series of meetings. We have become almost one church. We are doing everything together," said Rev.  Mathais.

The Nigerian church officials also spoke about the Peace Walk that took place late last year to mark the one-year anniversary of the Takum peace agreement. Participants, many from Taraba and Benue states, gathered in Takum to begin the walk that went from church to church and community to community across the region over a 10-day period.

"Hundreds of people participated. It was very successful," said Rev. Ykubu of the CRCN.