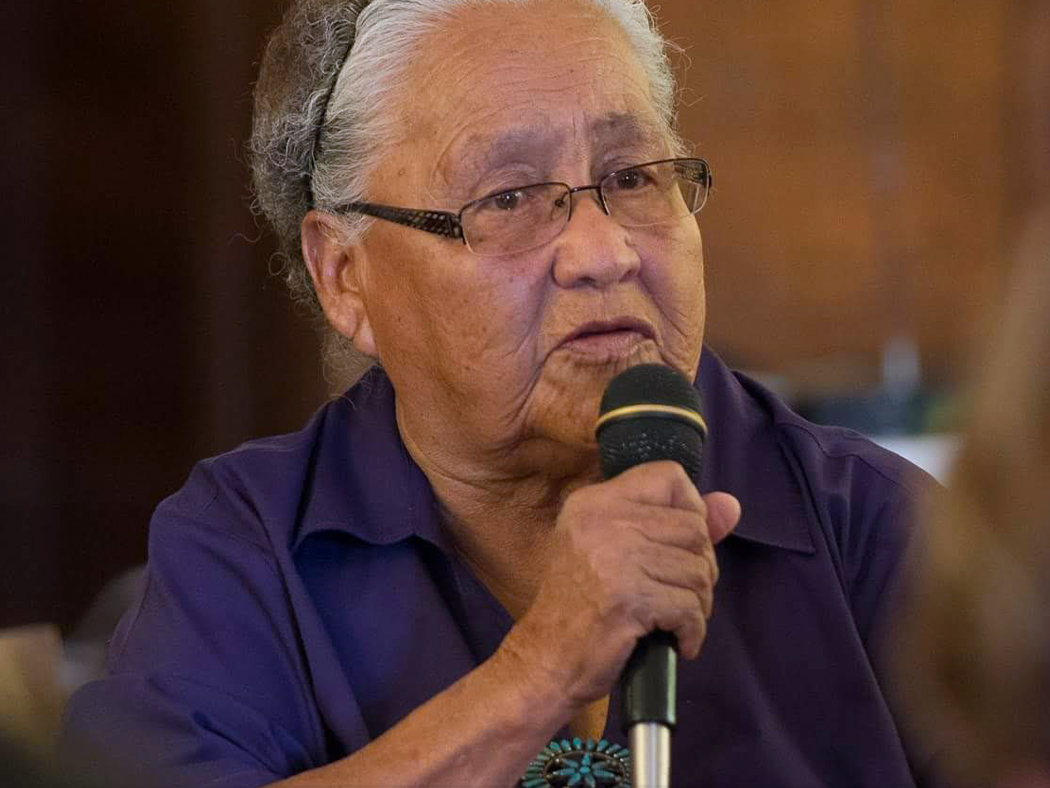 Elizabeth Bitsie Jones, who died recently at the age 78 of kidney failure, had a wide-reaching impact on her community of Mexico Springs, which is located on the Navajo reservation in New Mexico.

She was a teacher’s aide in a local school for several years; served as president of the local chapter house, the meeting place for people living in the area; and was active in her church, First CRC in Tohatchi.

At the same time, though, Elizabeth Bitsie Jones liked to stay at home, not too far from where she was born.

The daughter of Walter B. and Freida Bitsie, who translated the English spoken by CRC missionaries into Navajo, Elizabeth was a lifelong leader, the matriarch of her family, and a woman of prayer.

In his book titled Rehoboth, a Place for Us: A Family Album of Stories, author James Schaap wrote: “Elizabeth was born in 1941, the seventh of nine children, all of them reared in a devotedly Christian home on the family compound. . . .

“She was heir to a powerful faith and commitment evidenced in what her parents said and what they did. She is, some might say . . . a woman who doesn’t remember a time when God’s Word itself wasn’t a vivid presence in her life.”

Ron Polinder, former principal of Rehoboth Christian School, said, “There has been a significant loss in the passing of Elizabeth Jones. . . . It is really true—the virtues she lived by are exemplary and worthy of a story.”

Two of her children — Marvin and Felica - say their mother was a low-key woman who loved singing hymns around the piano in her home. Also, family and friends were paramount to her.

Because her heart was open to the various hurts and struggles others faced, her children said, she always kept the doors of their home open for visitors.

“My mother offered outreach to the whole community,” said her son Marvin, the third of 11 children.

“She always had time for all kinds of visitors — for the homeless, for those who lost a family member, for a marriage breakup, for people who just wanted to talk.”

Felica especially remembers her mother’s deep, unwavering faith — which defined who she was. Every day, she said, her mother would take things that were on her mind to God. She exemplified her faith in other ways as well.

Felica added that she remembers her mom taking the children to various gospel meetings. “My brothers and sisters and cousins would all go, and we would be right there — all singing Navajo Christian gospel music.”

Once a week the family and others would gather at the chapter house or elsewhere to sing. Led by Elizabeth, their faith was rich and real and helped others, said Felica.

“When my mother spoke, people listened,” said Marvin. “They looked at her as the mayor of Mexican Springs.”

Both recalled how their father, William Jones, Sr., made his living as a carpenter and built his wife a house and expanded it as the family grew on the family compound.

“My father was a school bus driver, and that is where he met my mother. She would ride the bus home, and they got to know each other,” said Marvin.

Peter Garcia, her grandson and a musician, recalls his grandmother’s final days. Suffering from kidney failure, she was able to stay at home as her family gathered around her. She knew she was dying and let everyone know it would be important to keep believing and to keep going to church and knowing the Lord, he said.

After the funeral service and at the gravesite, Peter was there playing an electric keyboard. “When she was laid in the grave, I sang #268 in the Navajo Hymnal, ‘Precious Lord, Take My Hand / óhólníihii, Shíla’ Yíníta,’” he said.

Then he played “Because He Lives,” and members of the church sang along.

Gail DeYoung, director of the choir at Rehoboth Christian School, said Peter is an accomplished piano and trumpet player. But he is an especially good singer, she added. He performed at the CRC’s Inspire 2019 and is scheduled to perform at next summer’s Inspire 2021.

Thinking of the extended family, DeYoung said she is certain that the death of Elizabeth will leave a big gap in their lives. Elizabeth was the lynchpin of the family.

DeYoung remembers how she would lead the whole family in to attend a concert for the choir — or how they would gather and sit together and make a fuss and cheer wholeheartedly for a family member playing basketball or another sport.

“Elizabeth had unconditional love and accepted everyone,” said DeYoung. “She loved God, and she loved her neighbor. It just poured out of her. She lived out the great commandments to love God and love your neighbor as yourself.”