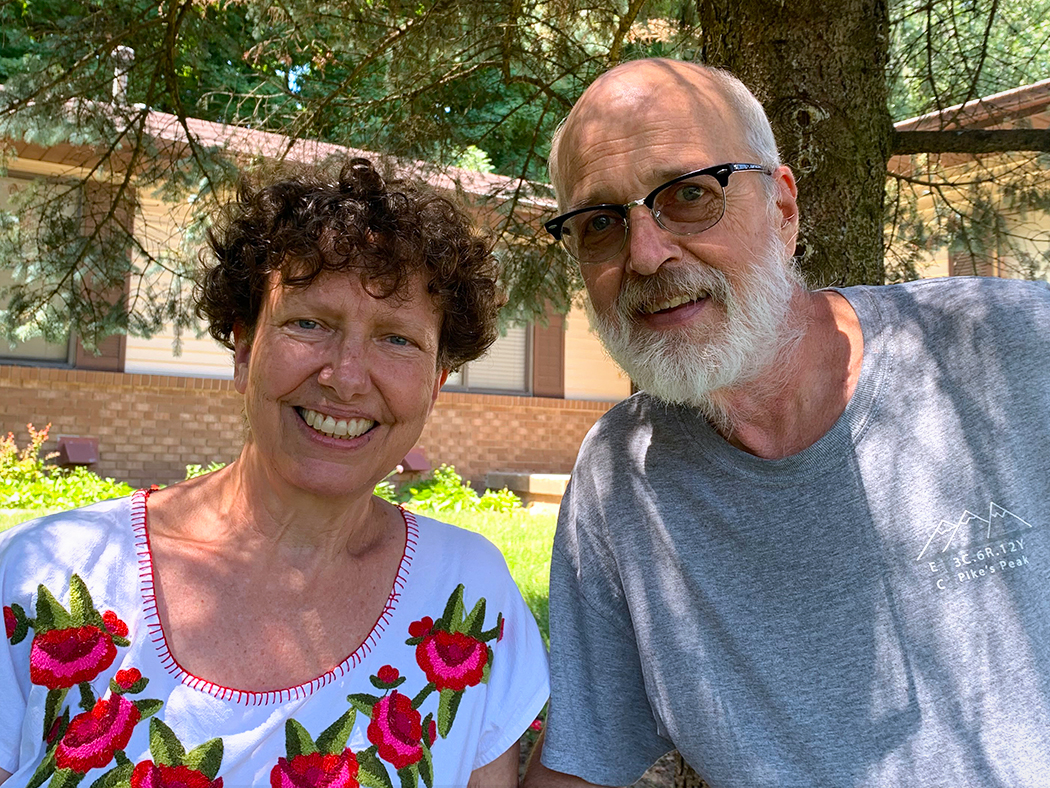 After serving for nearly 40 years with World Renew, Leanne Talen Geisterfer is retiring — but she doesn’t plan to step away from the kind of work she has been doing.

She is looking to do consulting, training, and volunteer work with her church and community in and around Tegucigalpa, the capital of Honduras. As she keeps busy doing those things, her husband, Caspar, will be continuing his ministry of training church leaders through his role as a missionary for Resonate Global Mission.

Even though much has changed since she and Caspar began their work among Haitian sugarcane workers in the Dominican Republic in 1982, World Renew (then known as the Christian Reformed World Relief Committee) continues to live out its core values, she said.

In their work, Leanne and her colleagues and partners  have sought to incorporate the findings of research in such areas as education, agriculture, nutrition, and health care into World Renew’s mission to share the gospel message, in word and deed, with whomever it works, she added.

Commitment to the people

Colleagues say Leanne will be missed. Her deep faith has played out in many ways, they say — and most of all in helping to give a voice to the vulnerable.

Zachary King, director of Resonate Global Mission, said
Leanne has been deeply committed to the growth and flourishing of local communities in the countries where she has served and supervised.

“She taught us all to carefully listen to local communities and local ministry partners. I will always remember her extensive use of participative inquiry (flipcharts, dry-erase boards, group activities, etc.),” said King.

Leanne, King added, “is a true citizen of Hispaniola — equally at home in the Latino culture of the Dominican Republic as she was in the African context of Haiti. She always has been a tremendous student of culture and has built great relationships with leaders from the Dominican Republic, Haiti, and Honduras.”

Ida Kaastra-Mutoigo, director of World Renew - Canada, added that Leanne Giesterfer has been a key component of World Renew’s ministry:

“Leanne served out of a deep sense of calling and commitment to mercy and justice, particularly determined to strengthen the work of churches in their communities and ultimately changing the lives of hundreds of thousands of people.”

Throughout her years with World Renew, Kaastra-Mutoigo said, she has always been inspired by Leanne’s deep faith in God lived out in a combination of grace and truth.

“Her passion, along with a vast set of skills in facilitation, training, organizational management, team building, and the spiritual gift of encouragement, has led her to be a force for community transformation,” Kaastra-Mutoigo said.

And, Carol Bremer-BennettL, the U.S. director of World Renew, commented: “Leanne is someone who always asked the down-to-earth, ‘how are we going to actually do this?’ type questions. She approached her work holding both the ideal of how things should be and how things are perspective. Her role was to find ways to bridge that divide.”

Listening for God’s call to ministry

From the start of their marriage, Leanne and Caspar agreed that neither would stop the other from taking a ministry position to which they believed God was calling them.

This has meant some prolonged absences between them — and at times the need for both to reevaluate their own ministry work in hopes that they could serve together in some way on the mission field.

Their first call came in 1982 when Leanne and Caspar were sent to work among people who harvested sugarcane and lived in impoverished conditions in the bateyes — sugarcane work camps — in the Dominican Republic.

Even before they arrived to work in different areas of ministry — Leanne in literacy work and Caspar in church diaconal ministry — they realized they faced a tough challenge.

They were aware that the people who labored in the cane fields were immigrants from Haiti, who were lured there in hopes of creating a better life for themselves. But essentially, said Leanne, they became the slaves of the owners of the sugarcane plantations. Thus, they were paid little, had to live in ramshackle housing, and labored long hours in the fields.

“The barracks in the bateyes were run down, dirty, built with wood, and overcrowded,” said Leanne. “The people lived in pretty desperate conditions.”

The Geisterfers were one of four families sent [by World Renew] in the early 1980s to work with Haitian immigrants in the Dominican Republic.

One of the areas Leanne focused on was literacy training, believing that if the Haitian immigrants, who mainly spoke Creole, could learn to read and write, they might be able to move forward in their lives.

“Classes were organized in local CRC churches, and they invited community members to attend,” she said. One of her greatest joys was to attend the graduation ceremonies of literacy groups, as people stood up to read from a book or write their name on a chalkboard. Their sense of accomplishment lit up their faces.

But progress was hard, given that the people had so many hardships to endure. They had to face circumstances and obstacles that kept them barely afloat economically.

Always, though, in the midst of this work, said Leanne, it was crucial to keep in mind why they were there: to show the love of Christ, who calls his followers to work with “the least of these” and to help people live lives of decency and hope.

“The Haitian people with whom we worked were very desperate migrant laborers,” said Leanne. “In the Domicican Republic they were mistreated and looked down upon. They had no land, no education. These were people who could hardly think beyond the next day.”

Playing into this were times in which Dominican Republic authorities would come into the bateyes and deport workers back to Haiti.

“It hurt to see the people from Haiti living in those conditions. They were despised and considered to be less than human.”

“When we went to the Dominican Republic, we were told to work ourselves out of a job,” said Leanne. And after a dozen years, the Geisterfers, in fact, found themselves moving on to work in Haiti. Leanne began a leadership role in World Renew’s work in Haiti. And during part of their time there, Caspar worked with Habitat for Humanity, then focused on getting a master of missions degree at Calvin Theological Seminary.

Upon arriving in Haiti, Leanne saw the conditions that prompted many Haitians to cross the border to find work in the Dominican bateyes. Streets were overcrowded with people trying to sell fruit and other items. And people who had nothing to sell — and there were many — simply found space to sit out of the sun. Roads were full of potholes, and the people needed ways to access better health care.

“The economy in Haiti was dire — the infrastructure was bad — yet there was still a certain amount of hope that year [when they arrived] because of a recent change of power,” she said.

But the subsequent and nearly constant turnaround of governments and widespread demonstrations in the streets added to the mix of challenges. “Things were volatile, and we did what we could to help,” said Leanne.

Combining Development with the Gospel

In her various roles, there have been times when Leanne found it necessary to make sure that community development remained an important aspect of World Renew’s work in Latin America.

“I wanted to make sure that along with such things as microfinance and literacy programs, we and our partners supported community organizing and capacity building, the nontangible work that supports the long-term impact of the other programs,” she said.

Along these lines, she added, “We wanted to train deacons to get service ministries active in their churches.” In an environment where the political climate changes rapidly, the local church can be one of the few stable institutions with great potential for impact.

A major earthquake that hit Haiti in 2010 made the country’s many problems worse. Yet World Renew, in collaboration with Resonate (then Christian Reformed World Missions) and other partners, ramped up their efforts to both help rebuild the country and continue with various programs to bolster livelihoods and contribute to Haiti’s development.

Progress in education is something that Leanne saw occurring over the years to the point where today, she said, “It’s amazing now to see the early-morning flood of children and young people going to school in Haiti.”

While in Haiti, Leanne took on a regional position, with more responsibilities in overseeing World Renew’s work throughout Latin America. And after completing his studies, Caspar was offered a missionary position in Honduras, working through Resonate Global Mission — and the Geisterfers moved to Honduras.

Stepping into retirement today, Leanne reflects on the mutual interplay between bringing community development to people and at the same time spreading the message of Christ.

“As a team leader, I focused on the practice of community development, but I did it in a holistic way, recognizing that we are working to help create the kinds of communities that God wants to see in the world,” she said.

Honduras remains homebase for the Geisterfers. But both left the country a few months ago to meet in person with their supporting churches.

In March, Leanne left Honduras to visit her supporting churches and let them know about her retirement, but the COVID-19 pandemic intervened, causing both her and Caspar to stay longer in the U.S., with hopes that they can return to Honduras in August.

Though forced to “stay at home” and with retirement looming, Leanne has worked steadily online with the World Renew staff she supervises in Latin America. She has supported staff and partners, she said, as they have had to scramble to set up shop and work from where they are now living and redefine what parts “should and could continue, along with whatever work should be done to respond to new contexts created by the pandemic.”

World Renew and partners have prepared and shared educational messages about prevention and how to stay healthy during the pandemic. They’ve also distributed hygiene kits and food through community groups and partner churches.

A Time for Looking Back

Caspar says that Leanne shows a fearlessness in doing whatever she does. “She has given her all to World Renew. They got a gem when they hired her. . . . She’s smart and works well with team members.”

As they have served together or in different roles, the Geisterfers have been pleased to work for the CRCNA. “There is a commitment to our church that we share. . . . We want to remain part of the CRC community that gives us life,” he said.

As for Leanne, she is grateful to have been a part of World Renew’s ministry as it works in various ways around the world to foster the justice of God among people who live in poor conditions. She also appreciates how World Renew finds it important to help people deal with the impact of disasters and to help those who live under various forms of oppression.

Speaking of the ministry she and Caspar have shared in one way or another over the years, she said: “As I look back, I recognize God’s hand in guiding us as a young couple to begin our adventure and in providing churches and people along the way who have supported us with resources and prayer.”