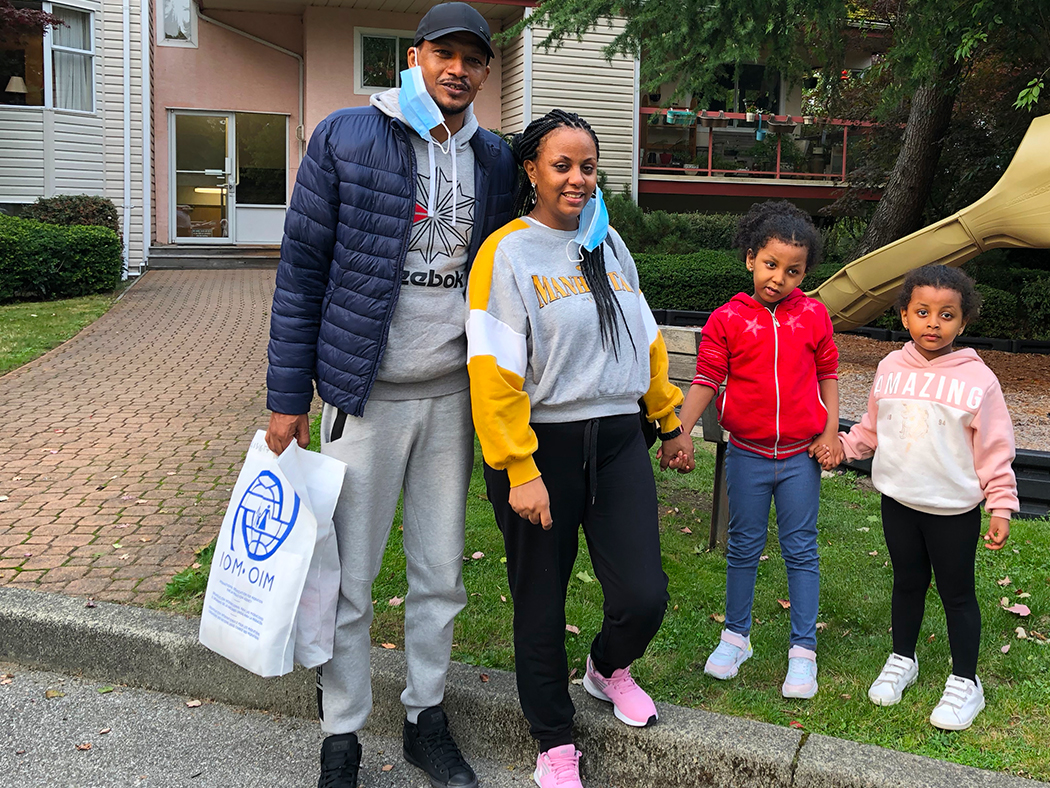 Kukuye and Kiya and their children

After ongoing threats of violence and jail in Ethiopia, and after being smuggled into Egypt, where they were oppressed and miserable, Kukuye and Kiya, along with their daughters, came to Canada on Oct. 1.

Sponsored by Ladner Christian Reformed Church of Delta, B.C., the family now has permanent status and a new home in Canada among the people who welcomed them at the airport and set up an apartment in which they now live.

As the latest new immigrants that this church community has sponsored over the years, the family told their story in Connections, the Ladner CRC newsletter, with help from Bev and John Bandstra, two members of the congregation who have been deeply involved in helping people from other countries to move to Canada.

“People like Kukuye and Kiya have blessed us so much,” said Bev. “These are people whom the UN has designated as refugees because of what they went through and because they can’t safely return to their home country. We can’t imagine the trauma they have been through, but yet their faith is strong.”

Kukuye and Kiya described their experiences as they were quarantined for two weeks upon arrival — a requirement because of the COVID-19 pandemic — in their apartment in the nearby town of Tsawwassen, B.C.

Kukuye was born in Jimma, a city in southwestern Oromia Regional State in Ethiopia. He said he was a member of the Ethiopian Orthodox Church for many years but was confused about eternal life and had many questions about God.

“It was not until 2006 that I received Jesus as my Lord and Savior. Now I am rejoicing in Jesus, and I love him with all my heart and soul,” he said.

One of six children, Kukuye said his father was detained by the Ethiopian police in 2005 and jailed for more than three years because he was suspected of supporting the Oromo Liberation Front, which was formed to try to gain independence from Ethiopia.

While Kukuye’s father was in prison, Kukuye was responsible for supporting his family, and then the police detained him and his sister for two years.

“After my release,” he said, “I was able to resume my work but was followed constantly. I was arrested again in 2010 and jailed for seven months. After that, my family helped me to escape Ethiopia. I spent four months in Sudan, and then I was smuggled to Egypt.”

His wife, Kiya, was born into a Christian home in Addis Ababa, the capital of Ethiopia. She said she met the Lord as a young adult.

“In 2013 my father was detained by government authorities because of suspected political affiliations, and a large bribe was demanded to have him released,” she said.

Meanwhile, she added, she was also threatened and fled from Ethiopia, first to Sudan and then, with the help of smugglers, to Egypt, arriving in September 2013.

“I met Kukuye soon after I arrived in Cairo, and we were married in November 2013,” she said.

But life in Egypt is not easy for refugees, said Kukuye. There is no freedom, and there is no future for foreigners there, he said. As a foreign woman, Kiya could not go to the market or to the doctor without being harassed and threatened.

Kukuye was also mistreated, said Kiya, and the police were unwilling to offer protection.

“Even though our daughters were both born in Egypt, they could never become citizens, and their future would be very difficult,” she said.

As time went on, life became especially dangerous for Ethiopian refugees in Egypt, said Bev Bandstra, because the Egyptian government and population are upset that Ethiopia is building the Grand Ethiopian Renaissance Dam on the Nile River for electrical power, which Egypt (downstream from Ethiopia) believes will greatly reduce their access to water.

“At times the Egyptians beat up our people, but God kept our family safe,” said Kukuye. “We lived in Cairo and attended the Ethiopian Evangelical Church; our congregation met at St. Andrews United Church of Cairo.”

Their church family consisted of Ethiopian refugees and migrants from a variety of denominations and ethnic groups in Ethiopia.

“We loved our church family, and many of us lived in one apartment building, sharing our money for food and rent,” said Kukuye.

Kukuye and Kiya applied for refugee status through the UN Refugee Agency. Because they couldn’t return to Ethiopia for fear of being jailed or worse, they waited and prayed and hoped that they could find a permanent home somewhere.

“We were eventually offered a new life in Canada, which made us so happy — Canada is such a good country,” said Kukuye.
“Our children can go to school here. And we can learn what we need to learn and get jobs here. We can live here in peace and freedom, which will change our lives for the better.”

Opening their church to new immigrants, said John Bandstra, is not unique for CRC congregations in Canada. Besides World Renew and City of Refuge, which Ladner uses in refugee resettlement, there are other agencies who are licensed to privately sponsor refugees. Denominations such as the CRC and other community groups across Canada have welcomed people from all over the world.

“Most of our churches were started 70 or so years ago by Dutch immigrants with a strong commitment to social justice,” he said. “The CRC in Canada has had a big global view of helping refugees.”

Over the years, Ladner CRC has helped several refugee families come to Canada. These families have arrived from such places as South Sudan, Rwanda, Iran, Myanmar, and the Democratic Republic of Congo.

“The people come from very different situations,” said Bev. “Some are very traumatized. Some choose not to talk about it. We leave it up to them if they want to tell us their story.”

The church, as it does with other new immigrants, will support the new arrivals  in many ways for the coming year as they get on their feet, find a school for their two children, find a physician, and gain employment.

Funds to support new immigrants came from special offerings collected by Ladner CRC, which has about 200 people attending services. “This has been our church’s thing for the past 12 years,” said John Bandstra, who helps fill out paperwork for refugees coming into Canada.

After Kukuye and Kiya and their children completed their quarantine, they were introduced to members of Ladner CRC. They have also been taken sightseeing, to local playgrounds, to the local library, and to shop for winter coats.

“This newest family is a delight. They are eager to settle into Canadian life and to engage in church life with us,” said Bev Bandstra.