Kinism Is A Grievous Sin 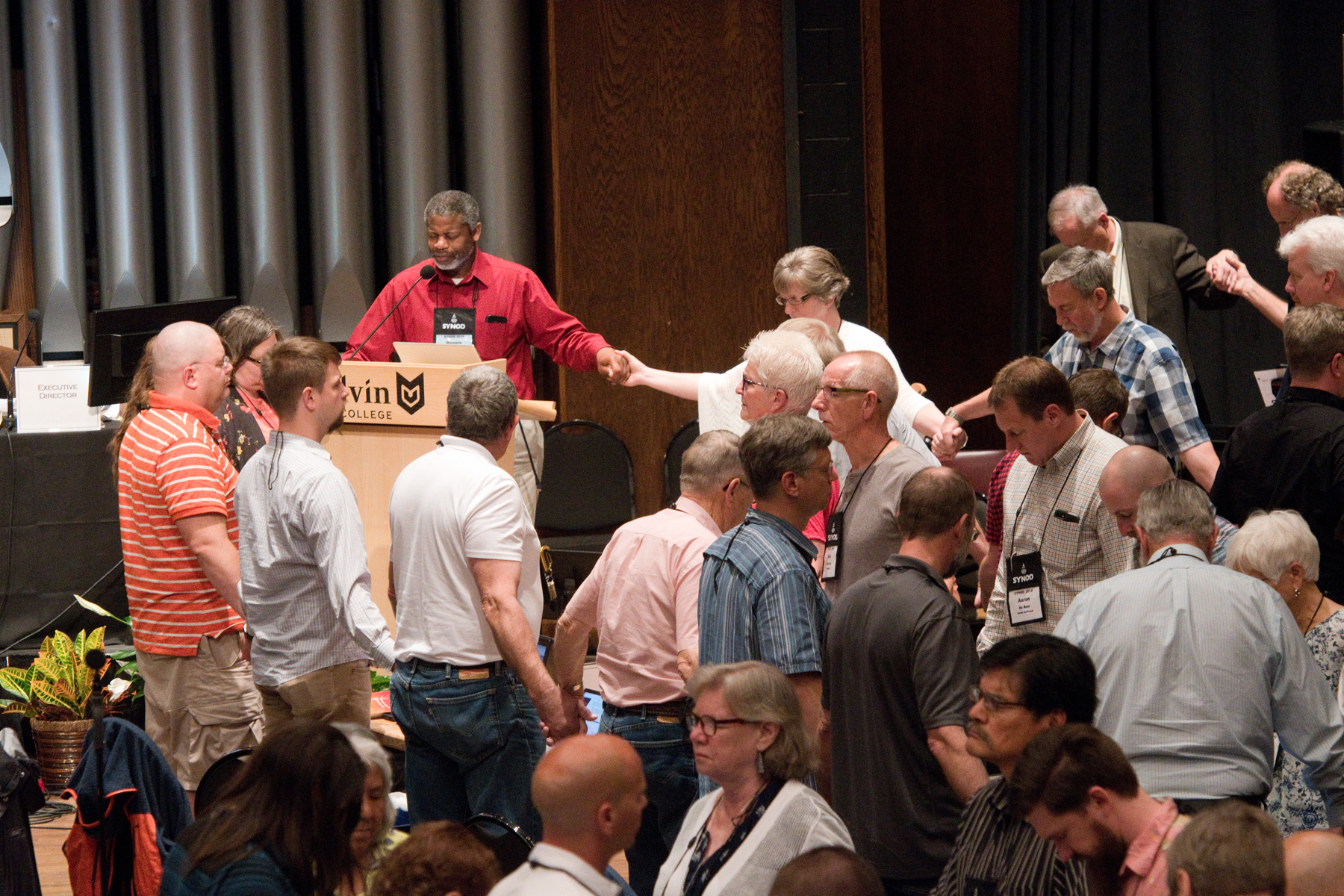 Reggie Smith (red shirt at podium) led delegates in a closing prayer and time of lament regarding the history of tolerance and indifference towards kinism in the CRC.

Synod 2019 declared Kinism a heresy. The decision came after a classis from California and one from New Jersey both sent overtures to Synod following a specific situation in a CRC congregation.

Kinism teaches that the races should be kept separate in racially pure “religio-ethnic states,” supporting white supremacy. A former CRC pastor, now dismissed from the denomination, espouses kinism and did so for many years while he and his church were part of the CRC.

Reggie Smith, director of the denominational Race Relations office, introduced the discussion with a story. Word had come to him that a pastor of a CRC congregation was teaching kinism, posting about it on the church’s social media accounts, and also posting about it personally

Smith decided to visit the church. He went alone, but, he said, “if I had taken my wife Sharon, who is white, we would have been heretical in the eyes of this pastor.” Kinism forbids interracial marriage.

The delegates were unified in their condemnation of kinism. Joel Renkema, Classis Central California, said, “Kinism says that people of color are less than human.” Andrew Hanson, Classis California South, called Kinism “the Americanization of apartheid.”

Margaret Jenista Kuykendall said according to Kinism, half of her staff would be deemed to be in unbiblical marriages and their children less than human.

Some wondered how Kinism could have been tolerated for so long in the CRC. Tyler Wagenmaker asked, “How does a pastor like this not get disciplined?” He presented a motion passed by synod that “councils and classes be admonished to promote confessional fidelity.”

Jonathan Owens, Classis Yellowstone, said Kinism is not isolated to this one former CRC church. It is, he said, “a common sentiment in a number of our [western] churches.”

Andrew Hanson, Classis California South, said while not all Reformed people were Kinists, all Kinists were Reformed.

In condemning Kinism, synod wanted a firmer definition of heresy. When is a teaching something one can disagree with but not condemn the people who hold it? And when does it pass over into the category of heresy? For the purposes of this discussion, synod worked with a definition of heresy that defines it as “a grievous deviation from sound doctrine.”

Synod wanted more. They requested the COD to study the meaning and application of the word “heresy” in church pronouncements. The COD will report back to Synod 2020.

The delegates not only discussed Kinism, they lamented it and all forms of racism. Margaret Jenista Kuykendall said for her, the condemnation of Kinism was personal. She said she had been in Charlottesville, Va., on Aug. 12, 2017. She said, “I have seen the tiki torches. I have breathed the tear gas. It’s not abstract to me.”

Synod lamented “the historic tolerance and indifference within our Reformed theological tradition perpetuating hateful racial prejudice and the theological error of Kinism.”

Coming back to the podium, Smith had the delegates join hands. He said, “This is family. In this place we are on the same level.” He led a prayer of lament and hope. Synod concluded the discussion of Kinism singing a new song based on 1 John 4:20.